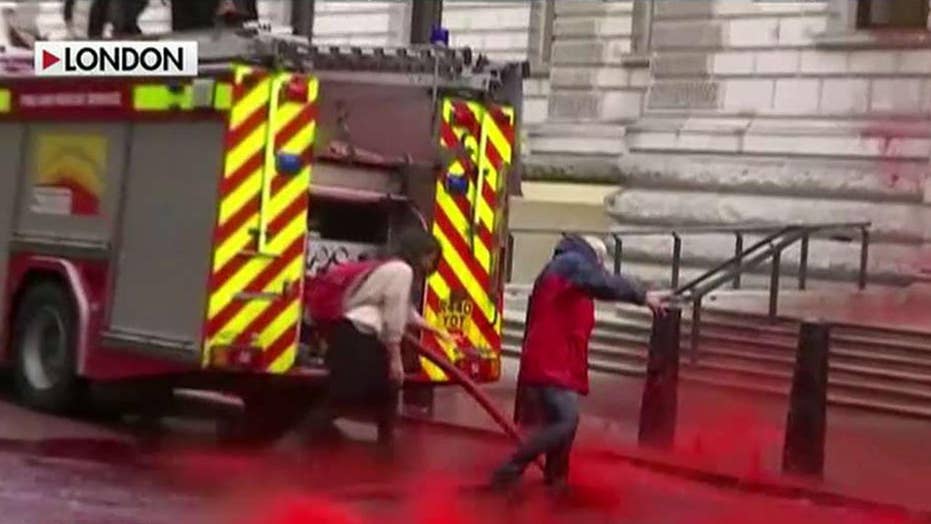 British police arrested four members of the climate activist group Extinction Rebellion on Thursday after they used a fire engine to spray the U.K.’s Treasury building with hundreds of gallons of fake blood.

The group said it carried out the protest because it wanted to raise awareness of the "inconsistency between the U.K. government's insistence that the U.K. is a world leader in tackling climate breakdown while pouring vast sums of money into fossil exploration and carbon-intensive projects,” according to Sky News.

But their latest stunt had some mishaps.

Extinction Rebellion protesters demonstrate outside the Treasury building in London on Thursday. (Reuters)

Organizers said they sprayed 1,800 liters of red liquid colored with food dye at the Treasury building, yet most of it appeared to have ended up on the street and sidewalk, Sky News reports. At another point, the protesters lost control of the decommissioned fire engine’s hose, it added.

The Met Police later said it arrested three men and one woman on suspicion of criminal damage and that there were no injuries stemming from the incident.

Extinction Rebellion has made headlines over the last year for a series of demonstrations that have snarled traffic in cities like London.

Extinction Rebellion protesters spray a hose outside the Treasury building in London. (Reuters)

The group says its next protest is scheduled for Monday next week – and the Met Police are working to free up as many officers as possible to deal with it.

“In the UK, we will peacefully shut down all roads into Westminster in Central London and non-violently disrupt the government until our leaders agree to TAKE EMERGENCY ACTION NOW,” reads a post on its website. “Other non-violent actions will target corporations, ministries, and infrastructure that maintain our toxic system.”

Extinction Rebellion, since it was formed late last year, has been demanding that Parliament act "to halt biodiversity loss and reduce greenhouse gas emissions to net-zero by 2025,” while also pushing for them to “create and be led by the decisions of a Citizens’ Assembly on climate and ecological justice.”

“Societal collapse and mass death are seen as inevitable by scientists and other credible voices, with human extinction also a possibility, if rapid action is not taken,” it has also warned.