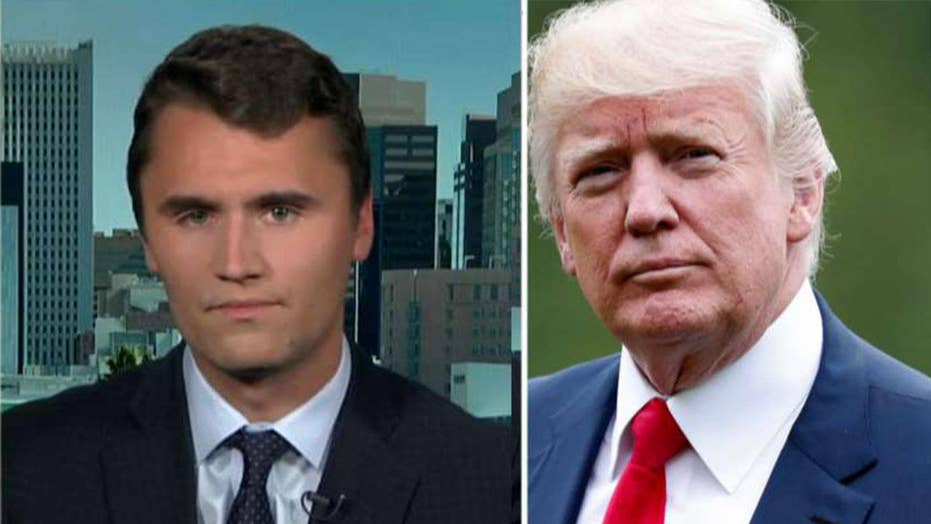 MÉRIDA, Mexico – The Nobel Prize Committee is just weeks away from announcing its 2019 recipient, months after it surfaced that multiple people nominated President Trump for the esteemed prize.

“I believe that much more can and should happen. So far, superficial messages have been sent to the world but real progress, one doesn’t see it,” said former President of Colombia Juan Manuel Santos, who won the award in 2016 for orchestrating a historic peace agreement with the country’s violent revel group, known as FARC, following decades of conflict. “We need to see more complete progress.”

However, he acknowledged the importance of Trump taking “bold moves” and seeking to establish personal relationships even with adversaries such as North Korean dictator Kim Jong Un.

“It’s extremely important. Leaders are human beings and if they have good chemistry, and some kind of empathy, that makes negotiations much easier,” Santos quipped.

But, David Trimble, who served as the first First Minister of Northern Ireland from 1998 to 2002, and who won the peace prize in 1998 for his work to draw a peaceful solution to end the conflict in Northern Ireland, didn’t rule it out.

“Trump is going to do what he wants to do and what he thinks is best. And the Norwegian Nobel Committee acts on the basis of the nominations it receives. Some who deserve it never win,” he said. “And it’s important to remember that (in the case of North Korea) it is not just a member of saying nice things but applying pressure. And it is better if it’s done in a way that does as little damage as possible.”

Lord David Trimble, who served as the first First Minister of Northern Ireland from 1998 to 2002, won the Nobel Peace Prize in 1998. (Hollie McKay/Fox News)

This year, 301 candidates received nominations by the Jan. 31 deadline -- 223 are individuals and 78 are organizations.

Earlier this year, it was reported that Trump was nominated not only by Japanese Prime Minister Shinzo Abe but also by at least two other Norwegian lawmakers for his “positive developments on the Korean Peninsula” and easing of tensions with Kim.

The Norwegian Nobel Committee – which has selected the recipients of the peace prize each year – did not respond to a request for further comment. But, as a rule, the committee has not unveiled the names of the nominees until 50 years have elapsed.

The process of selecting the winner has entailed creating a shortlist subject to assessment by the Nobel Committee’s roster of “permanent advisors,” in addition to international experts from Norway and beyond. The final decision has been made in the last meeting, usually held at the beginning of October. This year, the laureate is to be announced on Oct. 11 with the acceptance ceremony slated for December.

Other recipients offered clear ideas on how not to win the prize.

Shirin Ebadi, a former Iranian judge, human rights activist and 2003 winner, who has since lived in exile in London, cautioned that inking “peace deals” with the current Tehran regime would be no way to win the prestigious prize.

“My recommendation to Trump is to talk about democracy and human rights and not only focus on nuclear issues. If there is democracy in Iran and the people can come to power, then those issues will be resolved,” she said. “Can democracy exist under the current regime? Not at all. Is it good to sign a peace agreement with dictators?”

In her view, Iran has sought – since the revolution of 1979 – to “be the leaders in the Islamic world” hence why the regime has meddled in the affairs of other countries beyond the Middle East. She stressed that any hypothetical deal would be equivalent to handing over money to the rogue nation to spend on its military and weapons arsenal, rather than on schools, hospitals, and the suffering population.

“The government always chants 'death to America' even in parliament, and they even set the American flag on fire. But all those people have their families and children in America. But students who want to go to study there are not allowed,” Ebadi continued. “Under Obama, hundreds of green cards were issued to people in the government of Iran. I still want to know why Obama sent all that cash to Iran in exchange for four hostages. Of course, I am happy the hostages were freed, they were innocent. But this is like being blackmailed by dictators.”

Then-President Barack Obama was the last American to receive the coveted prize. It happened in 2009 for his “extraordinary efforts to strengthen international diplomacy and cooperation between people.”

Despite many critics saying Obama had yet to do anything worthy of such an accolade, officials said he still would be a welcome presence at the annual peace summit.

But, he has yet to attend the conference of talking heads and forums related to reconciliation and accord.

“He is of course invited, our rule is that we invite each and every laureate,” said Ekaterina Zagladina, the president of the Permanent Secretariat of the World Summit of Nobel Peace laureates. “Our hope is that he will link to this channel to convey his message of peace to the world.”

Former President Jimmy Carter won the prestigious honor in 2002. Before him, then-Presidents Woodrow Wilson and Theodore Roosevelt won the prize in 1919 and 1906, respectively.

“Trump diagnoses the situation in the correct way. Everything he says is the reality including the wall and trade relations with China,” said Lech Walesa, who won in 1983 as a pro-democracy activist and went on to become the first democratically-elected president of Poland in the post-Soviet era from 1990-95. “However, the treatment he applies is not correct.”

He continued, “Must stop thinking of states and continents. Globalization is at the door.”

Lech Walesa won in 1983 as a pro-democracy activist before he became the first democratically-elected President of Poland in the post-Soviet era. (Hollie McKay/Fox News)

The Nobel Peace Summit was started some 20 years ago as a means to bring together the world’s “most inspiring advocates of social, political, community, international and personal peace.” This year the summit, held in the Mexican city of Mérida, brought together some 30 recipients with the intention of debating and discussing ongoing global problems and challenges and devising practical solutions.

And, of course, it was topped off by a Ricky Martin “Yucatán for Peace” concert.

The 2019 Nobel Peace Summit was held in the Mexican city of Mérida. (Hollie McKay/Fox News)

According to former South African President F.W. de Klerk, who won the Nobel Peace Prize in 1993 alongside Nelson Mandela for their efforts to bring an end to apartheid, such summits would bring about “good ideas” but “follow-throughs are very difficult.”

“The power of conferences is about changing hearts and minds,” he said. “That is important to measure.”

“Considering the fact that people here in Washington, D.C., were calculating the odds just two years ago around the likelihood of a U.S.-North Korea nuclear war, I would say there has been tremendous progress made,” noted Harry Kazianis, the director of Korean studies at the Center for the National Interest. “What Trump has done is effectively halt Kim Jong Un at the very end of a multi-decade process of gaining a nuclear device that can hit the U.S. homeland through North Korea's self-imposed testing ban. While some would argue that is not an achievement, we must remember it was that threat. North Korea being able to hit America with nuclear warheads--that was driving tensions through the roof. For that, and that alone, Trump deserves tremendous praise.”

With the announcement less than three weeks away, it’s now a waiting game.

“If Barack Obama can get a Nobel Prize for doing nothing, then I say give President Trump two for actually getting results on the North Korea issue,” Kazianis added. “There is no reason why Trump should not be nominated considering he was able to avert a nuclear war with North Korea – something that back in 2017 was a very real possibility.”