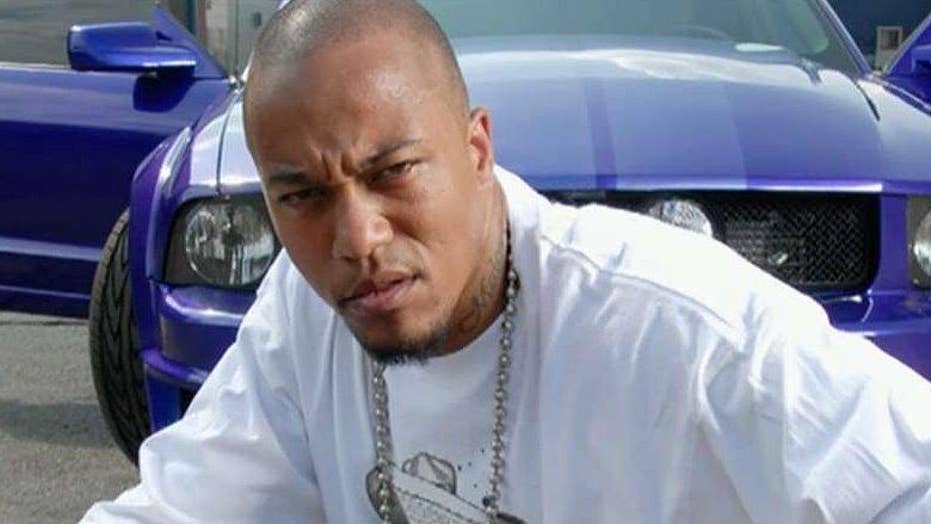 Employee served two years in prison after marrying a terrorist; Pete Hoekstra reacts on 'The Story'

A B-list German rapper who found stardom when he joined ISIS, cheated death and embarrassed the Pentagon topped himself when he got the girl – an FBI translator who set out to catch him and became his wife.

Germany’s fascination with Denis Cuspert, who found modest fame a decade ago as “Deso Dogg,” a rapper who once toured with American rapper DMX, spiked when he resurfaced in Syria as a high-visibility leader of ISIS. He was dubbed the black-clad terror army’s top recruiter, trading on his credibility with a generation of young, disaffected loners and appearing in numerous propaganda videos.

Then the Pentagon announced in October 2015 that the man now known as Abu Talha al-Almani had been killed by an airstrike near the Islamic State-controlled city of Raqqa, Syria.

It was not the end of Deso Dogg.

“Information about the death of Cuspert has circulated a number of times and up until now cannot be confirmed,” wrote the German intelligence officials in their annual intelligence report in 2015.

The Germans knew that prior reports of Cuspert’s demise had been greatly exaggerated. German media had reported him dead in 2014, only to see him reappear in a propaganda video, triumphantly hoisting the severed head of an infidel.

Even the dark lyrics Cuspert wrote as a rapper did not foreshadow the butchery he embraced as a member of ISIS.

"Cuspert is the most well-known of Islamic State German fighters,” said a German terrorism expert who has tracked Cuspert. “If he is not killed, he will remain a long time [as a member of] the Islamic State.

The Pentagon reversed itself in August 2016, stating Cuspert survived the airstrike. What the U.S. government did not acknowledge, until last week, was that Cuspert’s biggest humiliation of the West had been going on all along. That report corroborated one published on FoxNews.com more than two years ago.

In 2014, Cuspert seduced a turncoat translator who had been part of a Detroit-based FBI team that set out to track him down. Daniela Greene fell in love with her quarry online and left for the small northern Syrian city of al-Rai armed with an AK-47. She eventually left, returned to the U.S. and served two years in prison before her story got out.

Now, fresh details about her time with the man who went from forgettable rapper to jihadi rock star have emerged in the German publication BILD.

Greene flew to Istanbul and made her way to Gazientep in Southeastern Turkey where she crossed the border into Syria. Cuspert personally picked up Greene once she crossed into Islamic State territory in late June of 2014, BILD reported.

According to a BILD interview with a German ISIS fighter, Greene said she hailed from Canada and the Germans at the Islamic State's former stronghold did not know she spoke fluent German.

"Cuspert said that he still had to take care of something and needed to borrow a sport utility vehicle from a German fighter," said the German Islamic State member.

"When the Germans left the room for a short period of time and returned, she had rummaged through the closet and searched for things," the source told BILD.

Still, she received special treatment due to a combination of her beauty and her marriage to a terrorist VIP.

“It was talked about how beautiful she [Greene] looked and that she could have participated in Germany’s ‘Next Top Model” show,’“ said BILD’s source, who lived in al-Rai, a town of a little over 4,000 people, while Greene was there.

Greene wore a black abaya -- a robe-style dress -- and hijab to cover her hair, choosing not to veil her face like other women in Islamic State-controlled territory in Iraq and Syria. Her role was to stay within the German Jihadi colony in Syria, where she received extra attention.

"Melons, cold water and Pepsi were brought to her," the source said.

Long before Cuspert became an ISIS leader, he was a petty criminal whose rap lyrics revealed a dark and twisted mind. The son of a Ghanian father who left Cuspert’s German mother, he recorded three albums for a Berlin-based gangsta rap label and scored a minor hit with "Willkommen in meiner Welt" (Welcome to my World) in 2010.

According to a report in Vice.com, he converted to Islam in 2010 following a near-fatal car accident. In 2012, Cuspert left Germany for Egypt, before eventually making his way to Syria where he joined Al Qaeda. When Islamic State broke away from the terror group behind 9/11, Cuspert pledged his loyalty to ISIS leader Abu Bakr al-Baghdadi.

In 2016, the Turkish Army, along with Syrian rebels, evicted the Islamic State from al-Rai. The whereabouts of Cuspert, who named a son after Al Qaeda founder Usama bin Laden and once threatened to slit former President Obama's throat, are unknown. Until his distinctively tattooed body turns up, he is presumed very much alive.