The United States' reported interest in buying Greenland from Denmark is "absurd" and the fjord-lined island is not for sale, according to Danish Prime Minister Mette Frederiksen.

Then again, that's what any savvy negotiator would say.

"Greenland is not Danish. Greenland is Greenlandic. I persistently hope that this is not something that is seriously meant," Frederiksen told reporters Sunday during a trip to meet Kim Kielsen, the premier of Greenland.

The country, which is a semi-autonomous Danish territory in the Arctic with a population of around 56,000 people, is not on the market, Frederiksen said.

Her remarks come after the Wall Street Journal reported last week President Trump was interested in buying the country from Denmark. Trump reportedly asked his advisers about acquiring the island during “meetings, dinners and passing conversations” because of Greenland's “abundant resources and geopolitical importance.”

Speaking to reporters in New Jersey on Sunday, Trump described the idea as "a large real estate deal."

Trump said he's interested in the idea, but it's not a top priority for him or his administration.

Frederiksen, who became prime minister June 27, was on a planned two-day trip to Greenland before traveling to nearby Iceland for a meeting of the Nordic prime ministers. 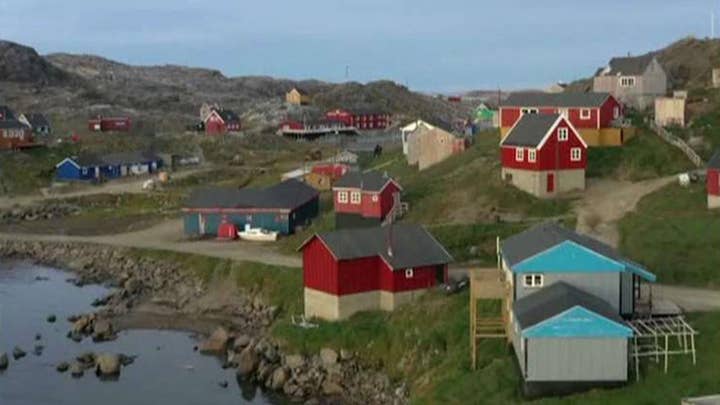 "Thankfully, the time where you buy and sell other countries and populations is over. Let's leave it there. Jokes aside, we will, of course, love to have an even closer strategic relationship with the United States," Frederiksen said, noting that the Arctic, with resources that Russia and others could exploit for commercial gain, "is becoming increasingly important to the entire world community."

Trump, who is scheduled to visit Denmark for two days starting Sept. 2 as part of a larger European trip, wouldn't be the first American leader to try to buy Greenland, the world's largest island. The U.S. proposed in 1946 to pay Denmark $100 million to buy Greenland after toying with the idea of swapping land in Alaska for strategic parts of the Arctic island.

Under a 1951 deal, Denmark allowed the U.S. to build bases and radar stations on Greenland.