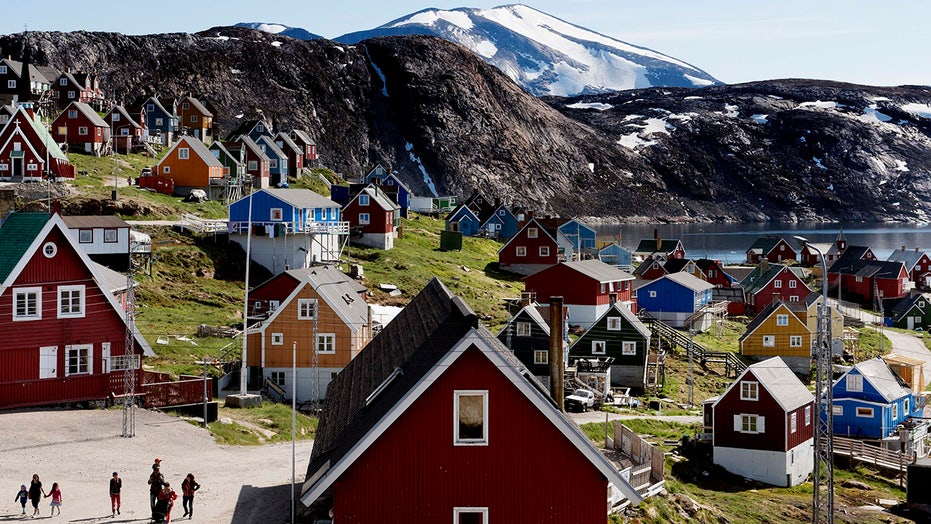 Greenland dismissed President Trump's reported intentions of purchasing the world’s biggest island, saying it was “open for business, not for sale.”

A report in The Wall Street Journal claimed that Trump has expressed interest in acquiring Greenland, an autonomous Danish territory, for the U.S.

White House sources told the Journal that Trump asked his advisers about acquiring the island during “meetings, dinners, and passing conversations” because of Greenland's “abundant resources and geopolitical importance.”

A Trump ally told the Associated Press on Thursday that Trump had discussed the purchase but was not serious about it.

General view of the town of Upernavik, in western Greenland. Aiming to put his mark on the world map, President Trump has reportedly talked to aides and allies about buying Greenland for the U.S. (Ritzau Scanpix via AP)

Greenland, however, said it’s not on the market.

“We have a good cooperation with USA, and we see it as an expression of greater interest in investing in our country and the possibilities we offer,” the island’s government said on its website. “Of course, Greenland is not for sale.”

The country’s foreign ministry insisted that it was “open for business, but not for sale.”

“Greenland is rich in valuable resources such as minerals, the purest water and ice, fish stocks, seafood, renewable energy and is a new frontier for adventure tourism,” the ministry said in a tweet Friday. “We’re open for business, not for sale.”

Danish politicians on Friday poured scorn on the idea.

"It has to be an April Fool's joke. Totally out of season," former prime minister Lars Lokke Rasmussen tweeted.

Meanwhile, Soren Espersen, the foreign affairs spokesman for the Danish People's Party, told broadcaster DR: "If he is truly contemplating this, then this is final proof, that he has gone mad. The thought of Denmark selling 50,000 citizens to the United States is completely ridiculous."

Former U.S. ambassador to Denmark, Rufus Gifford, commented on Twitter, saying: "Oh dear lord. As someone who loves Greenland, has been there nine times to every corner and loves the people, this is a complete and total catastrophe."

Still, it wouldn’t be the first time an American leader tried to buy the world’s largest island.

In 1946, the U.S. proposed to pay Denmark $100 million to buy Greenland after flirting with the idea of swapping land in Alaska for strategic parts of the Arctic island.

Danish meteorologist Steffen Olsen snapped a mesmerizing photo of his band of sled dogs walking on thin ice, across a frozen sea that has become flooded with melted glacial waters. Olsen was making the trek through northwest Greenland along the Inglefield Gulf, which is normally covered with ice and snow, but was flooded with running water from the melting Greenland ice sheet. Experts say the image is indicative of the planet’s climate crisis.

Coincidentally, the Journal’s report comes as Trump will make his first visit to Denmark next month. However, the sources said the scheduled trip is completely unrelated.

Greenland, which has a population of roughly 56,000 concentrated along the coastline, has welcomed U.S. military personnel to its Thule Air Base as part of a treaty between the U.S. and Denmark. More than 80 percent of the island is covered by an ice cap.

The Journal reported that advisers have said Trump sees purchasing Greenland as equivalent to the 1867 acquisition of Alaska.

The White House has not commented on the reports.