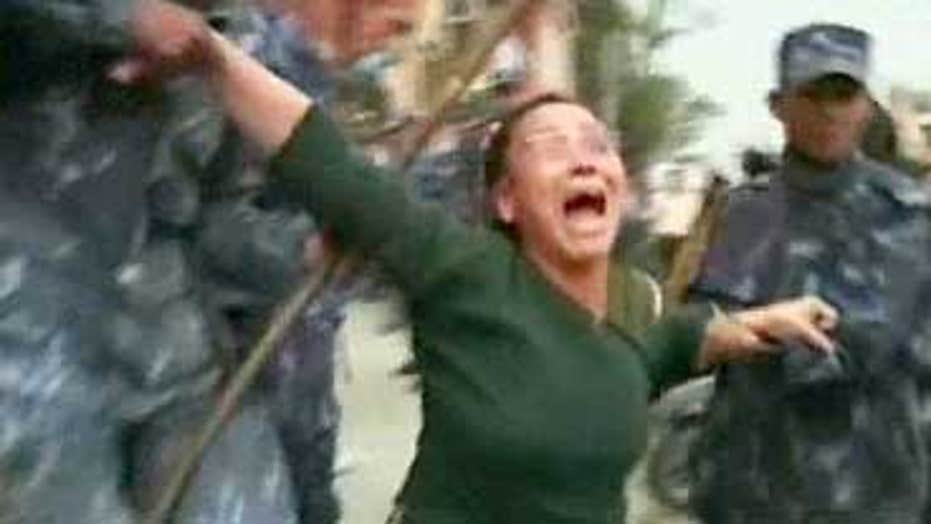 While much of the international community has focused on abuses against the Uighur Muslims in the Chinese province of Xingang, the human rights horrors against Buddhists in Tibet – a decades-long conflict -- have dropped from the limelight.

"Tibet is one of the worst human rights crises in the world today. More than 150 Tibetans have self-immolated since 2009, lighting their own bodies on fire to protest China's oppression," Bhuchung K. Tsering, vice president of the International Campaign for Tibet, told Fox News.

"Tibetan schools are forced to teach students in Chinese as the primary language rather than Tibetan. And just recently, Chinese authorities ordered Tibetans to remove their beautiful prayer flags from villages and hilltops. Living under the repressive rule of the Chinese Communist Party, Tibetans have virtually no freedom of religion, freedom of speech, or any of the other basic freedoms that no government has the right to take away," Tsering explained.

U.S. watchdog Freedom House lists Tibet as the second-least-free country in the world, behind only Syria.

Concerns over the future of Tibet flared further this week after the Chinese government announced it was shuttering the U.S. Chengdu Consulate, which served the Tibet and other Tibet-populated surrounding regions. The retaliatory move came just days after Washington ordered the Chinese consulate in Houston closed over espionage concerns.

However, foreign policy analysts underscore that closing the Chengdu location was a way to further remove the U.S. from monitoring alleged abuses in Tibet.

An exile Tibetan offers a piece of cake to a portrait of her spiritual leader the Dalai Lama to mark her leader's 85th birthday in Dharmsala, India, Monday, July 6, 2020. (AP Photo/Ashwini Bhatia)

Nestled in the southwest crevice of China, Tibet also borders Bhutan, Burma, Nepal and India. Its legal status is also subject to debate – Tibetans claim their country is independent, while the Chinese Communist Party (CCP) of the People's Republic of China (PRC) claims it belongs to them.

According to Amnesty International's most recent China report, "the human rights situation continued to be marked by a systematic crackdown on dissent," and that Tibetan areas were especially subject to "repression conducted under the guise of 'anti-separatism' or 'counter-terrorism.'"

In its 2019 Human Rights Situation report, the India-based Tibetan Centre for Human Rights and Democracy (TCHRD) claimed that Beijing was using an extensive amount of surveillance technology  to "suppress Tibetans and instill fear," and "violate the right to freedom of expression and privacy of journalists, bloggers, and human rights defenders."

Others call the CCP's iron-fist "cultural genocide," as the Dalai Lama framed it in 2008.

A Tibetan monk stands at a Tibetan Monastery during the third day of "Losar," or Tibetan New Year, at Baudhanath Stupa in Katmandu, Nepal, Friday, Feb. 24, 2012. ((AP Photo/Niranjan Shrestha))

And even though China's constitution prohibits the state, public organizations and individuals from forcing religion on citizens, the U.S. claims there is anything but religious freedom – especially when it comes to Tibet. The vast majority of ethnic Tibetans practice Buddhism; however, some across the Tibetan Plateau engage in the pre-Buddhist religion of Bon. Small segments also practice Islam, Catholicism or Protestantism.

A State Department report last month stressed that government "regulations control all aspects of Tibetan Buddhism, including religious venues, groups, personnel and schools," and that some in the Tibet Autonomous Region (TAR) and other Tibetan areas have been subject to "forced disappearances, arrests, torture, physical abuse, including sexual abuse, and prolonged detentions without trial of individuals due to their religious practices."

"Former detainees reported being beaten until they lost consciousness and being shocked with electric batons. There were reports that monks and nuns were forced to wear military clothing and undergo political indoctrination in detention centers," the report stated. "The government continued to restrict the size of Buddhist monasteries and other institutions and to implement a campaign begun in 2016 to evict monks and nuns from monasteries and prohibit them from practicing elsewhere."

Chinese authorities have evicted between 6,000 and 17,000 Tibetan and Han Chinese monks and nuns from Larung Gar and Yachen Gar Tibetan Buddhist Institutes, the report said. Children also were restricted from many traditional religious festivals and from receiving religious education.

Lhasa, the capital of Tibet

The veil of repression and the potential for punishment has, exiled Tibetans say, created such anxiety that many refuse to even utter the name of the Dalai Lama, the Tibetan Buddhist spiritual and political leader.

"From an economic perspective, the CCP wants to extract resources, including water and minerals, to sustain other parts of China," surmised Cleo Paskal, non-resident senior fellow for the Indo-Pacific at the Foundation for Defense of Democracies (FDD). "From a strategic perspective, it is moving in major infrastructure, military hardware, and troops to advance its territorial claims on its neighbors, including India."

Early in the 20th century, Tibet – under the 13th and previous Dalai Lama – had its own currency, national flag, military, passports and diplomats. It remained neutral throughout the Second World War, but in 1950, the newly established communist regime in China under Mao Zedong invaded the land parcel, rich in natural resources and critical in its geography bordering India. The CCP claims Tibet has historically been – and remains – China, while Tibetans cling to their seeds of independence.

Marion Smith, executive director of the Victims of Communism Memorial Foundation (VOC), said, "The CCP has become much more clever at silencing voices in the West who dare to raise awareness about Tibet, especially in Hollywood—just ask Richard Gere."

The American Hollywood star joined the board of directors at the International Campaign for Tibet in 1992 and passionately called for a boycott of the 2008 Beijing Olympic Games. He claimed in a 2017 interview with the Hollywood Reporter that he was dropped from a number of blockbuster movies because China doesn't like him, and that studio films struggle get financing with his name attached.

Brad Pitt was also once banned from China for having starred in the 1997 hit "Seven Years in Tibet" – although he visited the PRC in more recent years.

However, Chinese officials routinely note that over the past four decades, billions have been poured into Tibet to successfully lift it out of poverty, improve human rights and education, and invest in repairs to preserve Tibetan culture.

Despite its disappearance from international diplomacy, Tibet is re-emerging in the widening rift between Washington and Beijing. Weeks before the consulate shutdown, Secretary of State Mike Pompeo warned that international access to the "tightly controlled" TAR was a matter of regional and environmental security, and banned from the U.S. several Chinese authorities who have barred that admittance.

In this March 10, 2015 photo, a Tibetan exile shouts slogans against China after being detained inside a police bus during a protest in New Delhi, India. (AP Photo/Altaf Qadri, File)

That demand remains to be seen.

"What Congress needs to do now is pass the Tibetan Policy and Support Act. This bill will dramatically upgrade U.S. support for Tibetans, including by sanctioning any Chinese officials who try to interfere in the succession of the Dalai Lama," Tsering added. "This represents not only a grave violation of the rights of Tibetan Buddhists but also a threat to religious freedom around the globe."