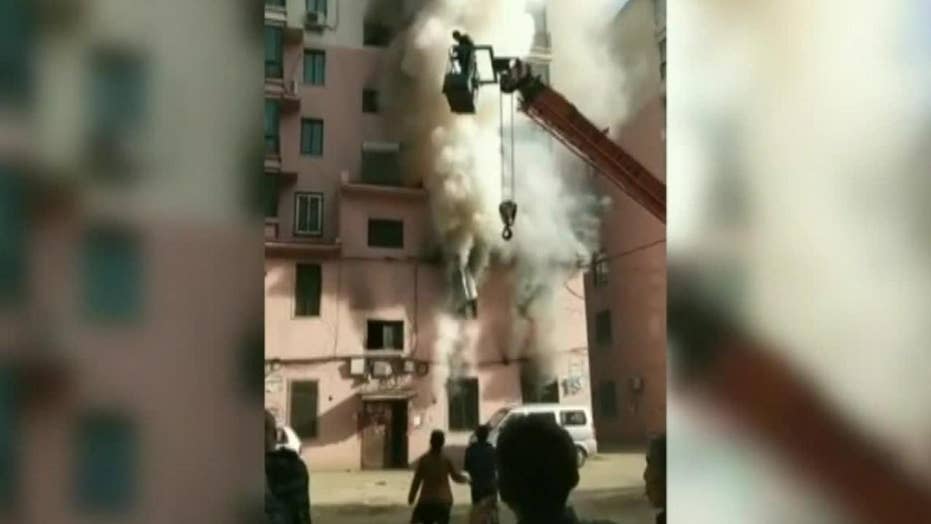 A 19-year-old crane operator has rescued 14 people from a burning building in China by allowing trapped residents to climb on to its platform.

A 19-year-old crane operator is being hailed as a hero after he helped rescue 14 people trapped inside a burning building in northeastern China.

Local media reported the teenager drove the crane from a nearby construction site when the fire broke out at an empty shop on the first floor of a seven-story apartment building in Fushun City in the Liaoning Province.

Dramatic video from the May 2 fire shows crane operator Lan Junze hoisting the machinery’s platform to the third floor, where a mother and son called for help.

“The flame was very, very close to them,” Lan told state broadcaster CCTV. “My first thought was to get the mother and son down.”

Once Dong Xiuyun and her son were safely out of the building, Lan moved the crane up to the fourth floor.

A woman is claiming she could see a ‘silhouette of Jesus Christ’ in the Notre Dame fire.

Mang Shengjun, a resident on the fourth floor, told the broadcaster that he would have jumped had the crane not appeared when it did.

“I was ready to jump out for survival,” he said, adding that his 70-year-old mother and his wife were not home at the time of the fire.

Dramatic video of the incident showed people being lifted to safety in the crane’s basket while the fire continued to spread and smoke billowed from the windows.

“The temperature was very high,” Lan said. “I could feel the burn on my face. I sweat a lot, got very red and very hot.”

Lan managed to save 14 people in less than half an hour. Local media reported one person died in the fire.