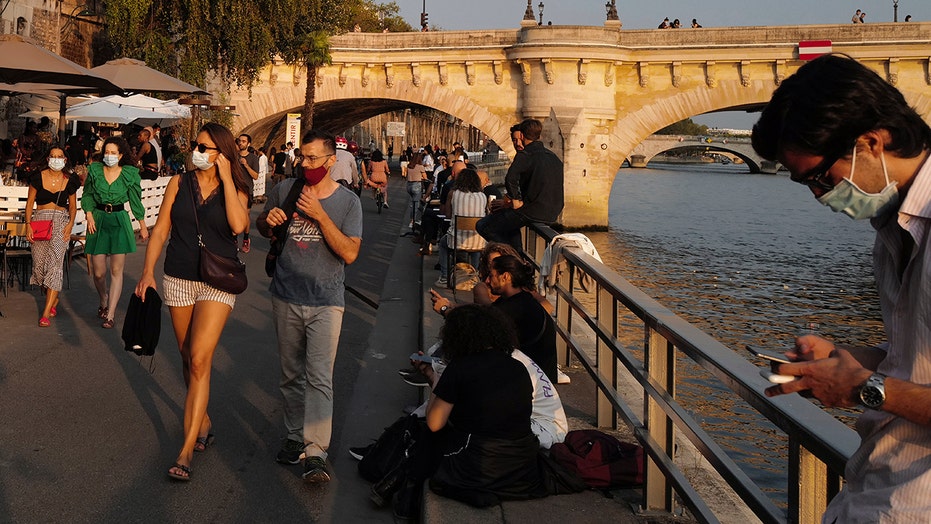 A rise in coronavirus cases in hotspots around the world has health experts warning that restrictions must be strictly followed in order to avoid a return to national lockdowns.

In France, health officials reported its highest daily increase of infections since the pandemic began in mid-February.

A total of 10,561 new COVID-19 infections were recorded Saturday, marking the first time the country has topped 10,000 new cases in a single day.

“After the joy of reuniting this summer, it’s time to be careful in the private world,” a group of doctors wrote in Le Journal de Dimanche on Sunday. “The smaller a room, the more people it contains, the less airy it is, the more you increase the risks.”

France has seen a sharp uptick in new cases in recent weeks and hospitalizations have started to increase steadily, reaching now over 5,000 including 615 people in ICU. (AP Photo/Francois Mori)

The French government is seeking to avoid a repeat of a stringent nationwide lockdown.

Saturday’s figures reported 2,432 people were hospitalized, with 417 in intensive care. Another 17 people died of the virus, bring France’s death toll to 30,903. The country is the second-hardest hit in Western Europe, with more than 400,000 confirmed infections.

ANTARCTICA IS STILL FREE OF COVID-19. CAN IT STAY THAT WAY?

In the United Kingdom, a government adviser told Sky News the countries face another national lockdown “in short order” unless people abide by new COVID-19 restrictions.

People sing and dance as they watch a street performer in Leicester Square in London's West End on Saturday, Sept. 12, 2020. People have been warned against having a "party weekend" as a former chief scientific adviser said the UK is "on the edge of losing control" of coronavirus. The public has been urged to act "in tune" with Covid-19 guidelines before the "rule of six" restrictions come into force on Monday. (Dominic Lipinski/PA via AP)

Peter Openshaw, a professor of experimental medicine at Imperial College London, said Sunday that the public “must act fast” to stop the spread of the virus.

"I think everyone is in agreement that we really need to act very quickly now in order to prevent this from growing exponentially, and ... we must act fast because it is so much harder to get this sort of thing under control if you delay even a few days,” he said. "This is potentially going to be quite dangerous now at this particular moment."

Elsewhere, COVID-19 infections continue to surge, most notably in India, where infections are increasing faster than anywhere else in the world.

The nation's health ministry reported a single-day spike of 94,372 new cases on Sunday, driving the overall tally to 4.75 million – behind only the United States.

A health worker takes a nasal swab sample to test for COVID-19 in Hyderabad, India, Sunday, Sept. 13, 2020. India's coronavirus cases are now the second-highest in the world and only behind the United States. (AP Photo/Mahesh Kumar A.)

Indian health officials also reported 1,114 deaths in the past 24 hours, pushing the death toll  to 78,586. The country is now testing more than 1 million people every day, officials said.

Despite the spikes reported around the world, there are some nuggets of positive news.

The use of public sports facilities is banned amid social distancing rules at a park in Goyang, South Korea, Sunday, Sept. 13, 2020. (AP Photo/Ahn Young-joon)

Meanwhile, domestic air travel in Wuhan, the original epicenter of the pandemic, has returned to pre-pandemic levels.

The virus was first detected in Wuhan late last year and the city underwent a draconian 76-day lockdown as its hospitals struggled to deal with a tidal wave of cases that required the rapid construction of field hospitals.

Since reopening in early April, life has gradually returned to normal and the number of domestic flights serving the city, as well as the number of passengers, have both fully recovered, according to the operator of Wuhan Tianhe International airport.

Elsewhere, Antarctica is still free of COVID-19. Nearly 1,000 scientists have wintered on the ice and are getting a peek of the sun for the first time in months. Now the task is making sure incoming colleagues don’t bring the virus.