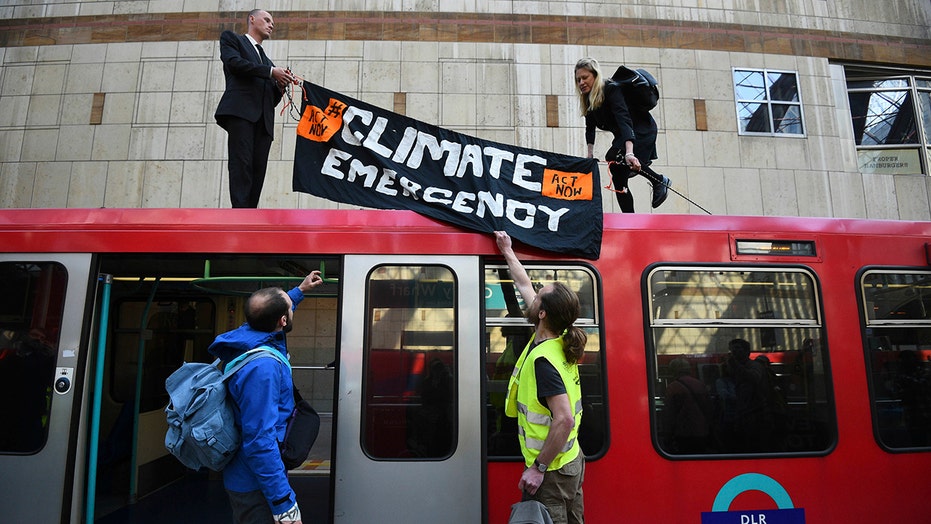 London was brought to a standstill Wednesday morning after militant climate change protesters cause havoc for a third day in a row, climbing and gluing themselves on subway trains, causing road closures and other disruption, leading to an arrest of nearly 300 people in the past 48 hours.

The protesters calling themselves Extinction Rebellion, which were also responsible for a naked protest in the British Parliament earlier this month, are demanding the government to legally commit to reducing net carbon emissions to zero in the next six years and are willing to go to jail for the cause.

Police and officials stand by as climate activists protest atop a Dockland Light Railway carriage at Canary Wharf station in London, as part of the ongoing climate change demonstrations in the capital, Wednesday April 17, 2019. The environment protest group Extinction Rebellion are calling for general public protests with civic disobedience held over several days, to highlight what it says is the failure to tackle the causes of climate change. ((Kirsty O'Connor/PA via AP))

The group has been clashing with police officers and blocking traffic in Central London, including near Parliament, since Monday, resulting in at least 290 arrests, the BBC reported.

The scale of the arrests forced the police to reveal that “contingency plans are in place should custody suites become full.”

The road is blocked by demonstrators during a climate protest at Marble Arch in London, Tuesday, April 16, 2019. The group Extinction Rebellion is calling for a week of civil disobedience against what it says is the failure to tackle the causes of climate change. (AP Photo/Kirsty Wigglesworth)

In addition to furious Londoners, the methods of the protest were criticized by left-wing London Mayor Sadiq Khan, who said that while he believes climate change must be tackled, he was “extremely concerned” about the disruptions.

“It is absolutely crucial to get more people using public transport, as well as walking and cycling, if we are to tackle this climate emergency - and millions of Londoners depend on the Underground network to get about their daily lives in our city,” he tweeted.

“Targeting public transport in this way would only damage the cause of all of us who want to tackle climate change, as well as risking Londoners' safety and I'd implore anyone considering doing so to think again.”

The militant protesters also glued their hands to the train carriages as they touted their success in causing mayhem in the capital, prompting the authorities to turn off the transportation system’s public Wi-Fi to stop them from coordinating actions, the Daily Mail reported.

Some commuters said the protest was “ridiculous” because it only forced commuters to use their cars rather than using the considerably more environmentally-friendly subway.

Police officers speak to protestors under a lorry, during a civic disobedience event to block Waterloo Bridge in London, Wednesday, April 17, 2019. The group Extinction Rebellion is calling for a week of civil disobedience against what it says is the failure to tackle the causes of climate change. (AP Photo/Frank Augstein)

Transport disruptions reportedly affected 500,000 people over the last few days, while retailers located on the high street say they lost about $12 million in sales in the last two days due to the protests.

Farhana Yamin, a protester who was arrested on Tuesday, apologized to Londoners on BBC Radio 4 but insisted that such actions are justified.

“I totally want to apologize to people using public transport. But at the same time we need to take actions that are disruptive so everyone understands the dangers we're facing right now,” she said.

“I'm not someone who goes out on to the streets and disrupts and gets arrested for no reason at all. But I feel people should understand that we are at a critical moment in our humanity's history.”