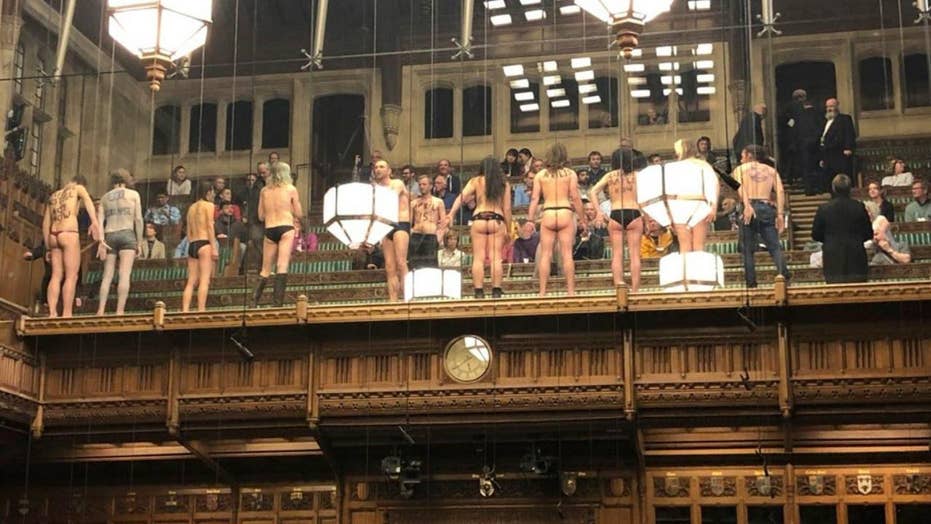 A dozen demonstrators have been arrested after stripping down in Britain's House of Commons to protest climate change amid Brexit debate.

More than a dozen protesters stripped down to their underwear in the public gallery at Britain’s House of Commons amid ongoing Brexit negotiations.

The demonstrators – aiming to raise awareness about the dangers of climate change – had slogans including “SOS” and “stop wasting time” painted on their bodies. Two of the activists wore full grey body paint and elephant masks.

The group Extinction Rebellion said the protest was an attempt to “draw politicians’ attention to the climate and ecological crisis.”

"We are walking dangerously close to irreversible climate collapse - this is what it has come to," the group said, according to Sky News.

Some 20 protesters entered the public gallery overlooking the House of Commons with some stripping down while others stuck themselves to the glass with superglue.

MP James Heappey shared an image of the protest from the floor of the Commons.

“Parliament just got a little bit more nuts!” he wrote as a caption.

The group shared a photo of police officers questioning the activists after they had been removed from the House of Commons’ chamber.

Wildlife biologist Iggy Fox, 24, told Sky News: "I'm tired of the time and resources our government wastes rearranging the deckchairs on the Brexitanic. I want a future, and right now they are burning it like there's no tomorrow.”

Lawmakers continued debating Brexit, with some making reference to the disruption.

Conservative legislator Nick Boles said: "It has long been a thoroughly British trait to be able to ignore pointless nakedness."