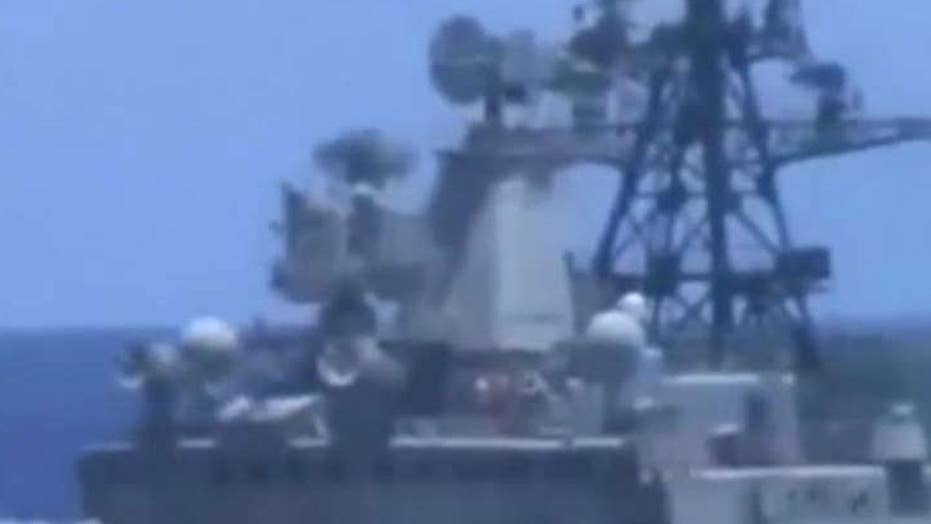 China warns US warship sailing in the South China Sea

As Beijing apparently gets closer to matching Washington and other powers in weapons technology, China is having a parade this week that might show off its rapidly developing arsenal, which may include a nuclear-capable missile that could reach the United States in 30 minutes.

The Dongfeng 41 is one of a series of new weapons Chinese media said might be unveiled during the parade marking the ruling Communist Party’s 70th anniversary in power. Others included a supersonic drone and a robot submarine.

The parade is expected to highlight Beijing’s ambition to enforce claims to Taiwan, the South China Sea and other disputed territories — and to challenge Washington as the region’s dominant force.

The People’s Liberation Army, the world’s biggest military with 2 million men and women in uniform and the second-highest annual spending after the United States, also has been working on fighter planes, the first Chinese-built aircraft carrier and nuclear-powered submarines.

“There are quite a lot of observers, including the U.S. military, who say, ‘This is getting close to what we do,’ and they are starting to worry,” said Siemon Wezeman of the Stockholm International Peace Research Institute (SIPRI).

The Pengaton has identified China as the U.S.'s top geopolitical threat.

A Chinese military vehicle carrying what appears to be a drone passing along the Jianguomenwai Avenue during a rehearsal last weekend for the 70th anniversary of Communist China, in Beijing. (AP Photo/Mark Schiefelbein)

Tuesday’s parade will include 15,000 troops, more than 160 aircraft and 580 pieces of military equipment, according to Ministry of Defense spokesman Maj. Gen. Cai Zhijun.

Many new weapons “will be shown for the first time,” Cai told reporters last week. Asked whether that would include the Dongfeng 41, Cai said, “Please wait and see.”

The ability to project power has been seen as increasingly urgent for Chinese leaders aiming to control shipping lanes and waters also claimed by Japan, South Korea, Vietnam, the Philippines and other governments.

“China has developed nuclear, space, cyberspace and other capabilities that can reach potential adversaries across the globe,” the U.S. Defense Intelligence Agency said in a report this past January.

No details of the Dongfeng 41 have been released, but the Center for Strategic & International Studies in Washington says it may have the world’s longest range at 9,400 miles.

Analysts have said the DF-41, flying at 25 times the speed of sound, might be able to reach the United States in 30 minutes with up to 10 warheads for separate targets — a technology known as MIRV, or multiple independently targetable re-entry vehicles.

China’s current mainstay missile, the Dongfeng 31, has demonstrated a range of more than 6,990 miles, putting most of the continental United States within reach.

China is believed to have about 280 nuclear warheads, compared with 6,450 for the United States and 6,850 for Russia, according to SIPRI. Beijing officials have said they wanted a “minimum credible nuclear deterrent” but wouldn’t be the first to use atomic weapons in a conflict.

A Chinese military vehicle possibly carrying a drone passing along the Jianguomenwai Avenue last weekend during a rehearsal for the 70th anniversary of Communist China, in Beijing. (AP Photo/Andy Wong)

Satellite photos have shown China increasing the number of launchers for DF-41 and DF-31 missiles from 18 to as many as 36, Harry Boyd of the International Institute for Strategic Studies in London said.

That suggested planners believed minimum nuclear force “needs to be larger,” he said. “It needs to have more advanced systems with MIRV capability to remain credible, in their eyes.”