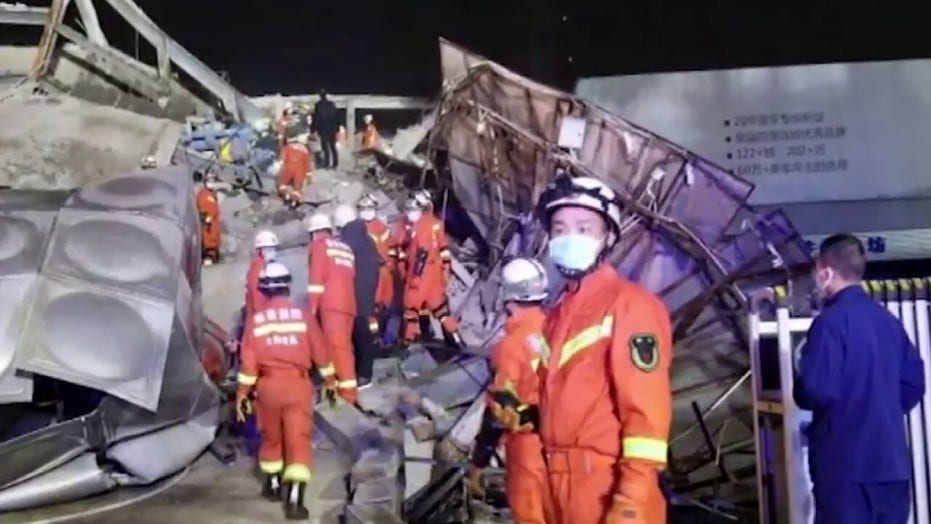 A mother and her 10-year-old son have been rescued from the collapse of a coronavirus quarantine site in southeastern China after being trapped beneath the rubble for 52 hours.

Rescuers pulled the two from the debris around midnight Monday after three hours of digging. Photos and video from the scene showed the pair covered in dust as they were rushed into ambulances.

Rescuers carry a woman pulled from the rubble of a collapsed hotel to an ambulance after being trapped for 52 hours.  (Xinhua)

There were 71 people inside the hotel in the city of Quanzhou, in southeastern Fujian Province, when the building collapsed on Saturday. The hotel was being used as a quarantine site for those infected with the COVID-19 virus.

Two supermarkets on the first floor were being remodeled, and a pillar reportedly deformed a few minutes before the collapse, the official Xinhua News Agency said Sunday, quoting a district official.

A 10 -year-old boy was pulled from the debris and rushed to a hospital. (Zeng Demeng/Xinhua via AP)

The building had been illegally reconstructed several times, an unidentified senior official said Tuesday, according to the news agency. Construction of the building began in 2013 and it was converted into an express hotel in 2018.

Shang Yong, deputy head of the Ministry of Emergency Management, said a comprehensive accident investigation will be launched to identify the cause of the collapse, and any official found responsible would be held to account.

The death toll increased to 20 on Tuesday, with 10 still missing, as rescuers continue searching the rubble. (Lin Shanchuan/Xinhua via AP)

Rescuers have been issued protective gear and disinfectant to minimize exposure to the virus.

The new coronavirus first exploded across mainland China last year, where more than 80,000 cases have been confirmed to date. There have been more than 3,100 deaths since the outbreak.