U.S. Central Command (CENTCOM) released new images Monday showing the aftermath of mine attacks against two oil tankers in the Gulf of Oman last week, including some images purporting to show Iranian forces removing an unexploded device from the hull of one of the vessels.

Hours later, Acting Defense Secretary Patrick Shanahan said he had approved a request from CENTCOM to send approximately 1,000 additional troops to the Middle East "to address air, naval, and ground-based threats" in the region.

"The recent Iranian attacks validate the reliable, credible intelligence we have received on hostile behavior by Iranian forces and their proxy groups that threaten United States personnel and interests across the region," Shanahan said. "The United States does not seek conflict with Iran.  The action today is being taken to ensure the safety and welfare of our military personnel working throughout the region and to protect our national interests." 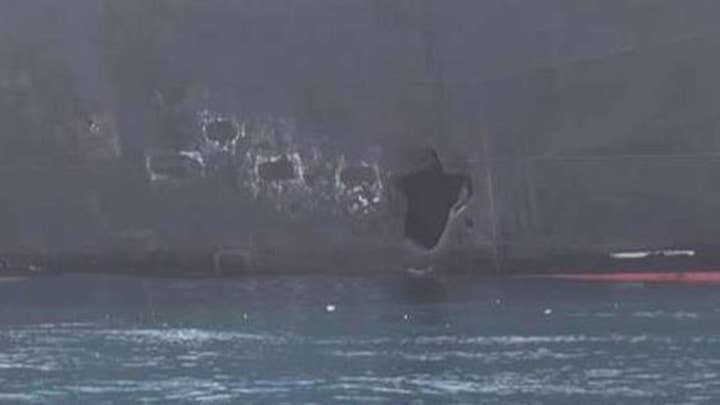 The military says that some of the 11 new images taken from a Navy helicopter show members of the Islamic Revolutionary Guard Corps (IRGC) Navy removing a limpet mine from the side of the Japanese-owned Kokuka Courageous oil tanker. Other photos show a large hole on the side of the Courageous, above the water line, that officials say appears to have been caused by another mine.

In a statement, Central Command reaffirmed the Trump administration's previous claim that Iran was responsible for the attacks on the Kokuka Courageous and the Front Altair "based on video evidence and the resources and proficiency needed to quickly remove the unexploded limpet mine."

Members of the Islamic Revolutionary Guard Corps (IRGC) Navy remove an unexploded mine from the hull of the M/T Kokuka Courageous in the Gulf of Oman last week (U.S. Central Command)

The images were made public one day before Secretary of State Mike Pompeo was scheduled to meet with CENTCOM commanders Tuesday. Pompeo has said that a new deployment of U.S. troops to the Middle East is an option in response to last week's attack.

The early Thursday attack severely damaged both vessels and forced the evacuation of 44 sailors. The incident took place near the Strait of Hormuz, a key strategic water route through which about 20 percent of all oil traded worldwide passes.

House Speaker Nancy Pelosi, D-Calif., warned the Trump administration after the reported troop deployment not to be "reckless and rash." She also said, "This deeply concerning decision may escalate the situation with Iran and risk serious miscalculations on either side. Diplomacy is needed to defuse tensions, therefore America must continue to consult with our allies so that we do not make the region less safe."

Relations between Iran and the U.S. have deteriorated in recent months. The U.S. has accelerated the deployment of the USS Abraham Lincoln aircraft carrier battle group to the region, sent four nuclear-capable B-52 bombers to Qatar and bolstered its defenses in the region by deploying more Patriot air defense systems.

Earlier Monday, Iran announced that it would break a limit on uranium stockpiles established by the 2015 nuclear agreement with the U.S. and five other world powers that was intended to restrict Tehran's nuclear program in exchange for an easing of international sanctions. President Trump withdrew the U.S. from that agreement last year.

Material left on the hull of Kokuka Courageous after the removal of a limpet mine (U.S. Central Command)

Under the deal, Iran can keep a stockpile of no more than 660 pounds of low-enriched uranium. Behrouz Kamalvandi, the spokesman for Iran's atomic agency said it would pass that limit on Thursday of next week. Iran has shown no willingness to negotiate another deal and vowed not to enter into talks with the United States while the administration maintains its "maximum pressure" campaign of sanctions.

In addition to reinstating economic sanctions, Trump recently ended waivers that allowed some countries to continue buying Iranian oil. That has deprived Iran of oil income and has coincided with what U.S. officials said was a surge in intelligence pointing to Iranian preparations for attacks against U.S. forces and interests in the Gulf region.