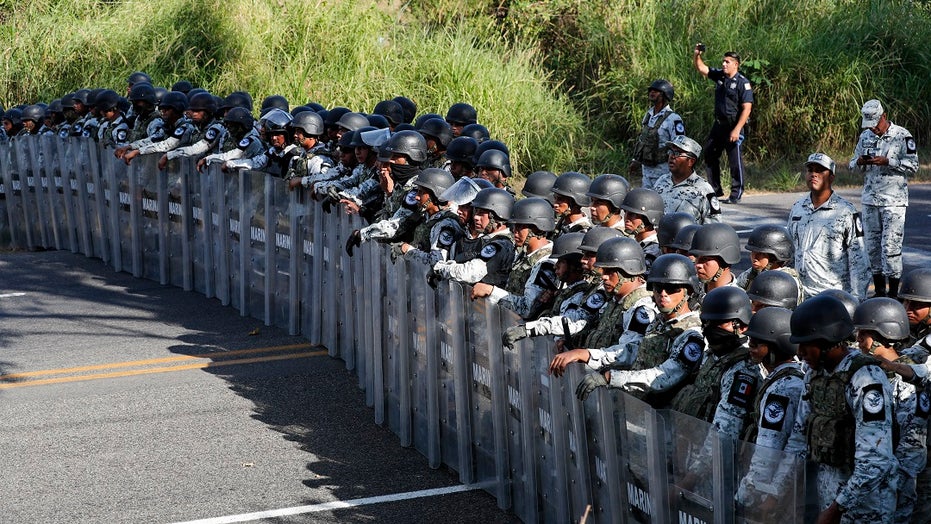 Mexican security forces and immigration agents put hundreds of Central Americans who crossed into the country early Thursday on buses to be processed and possibly sent back to their home countries amid a wave of migrants passing through in an effort to reach the United States.

The national guardsmen, dressed in riot gear, advanced on migrants who were stopped at a crossroads, prompting the migrants to kneel and chant "we want to pass."

Authorities awaited the caravan outside the community of Frontera Hidalgo, near Ciudad Hidalgo, where the migrants had crossed the Suchiate River at dawn.

Mexican National Guardsmen block the passage of migrants on the highway leading to Tapachula, Mexico on Thursday. Hundreds of Central American migrants crossed the Suchiate River into Mexico from Guatemala Thursday after a days-long standoff with security forces. (AP Photo/Marco Ugarte)

Many were escorted onto buses without resistance. Women cradling small children or holding kids’ hands wept as they walked toward the buses.

Jose Luis Morales, a Salvadoran de facto spokesman for the caravan, said the migrants wanted to negotiate to be allowed to pass peacefully. Federal officials arrived and a dialogue was opened.

He said afterward that authorities’ initial proposal was that they turn themselves in for detention while being processed for refuge -- what he called “always the same policy.” Instead, they planned to stay put until Friday, Morales said.

The crackdown comes as Mexico has vowed to help the Trump administration stem the flow of migrants, who inundated American border officials at the southern border in large numbers in 2018. Trump previously threatened Mexico with escalating tariffs if it did not take an active role in halting the surge of migrants.

Some threw rocks at security forces, forcing some families to be separated during the chaos. Authorities shouted that the migrants had two options: go back to Guatemala or turn themselves over to immigration agents.

The majority-Honduran caravan left from San Pedro Sula last week in the hope of of reaching the U.S. to apply for asylum. Aníbal, who declined to give his last name for fear of reprisal from immigration authorities, joined the group from his hometown of Santa Rosa, Guatemala.

Migrants sit on the highway leading to Tapachula, Mexico on Thursday, where they are blocked by National Guardsmen. (AP Photo/Marco Ugarte)

He said he was determined to reach the U.S. no matter what.

“They need to let us pass,” he said, adding that Mexican President Andrés Manuel López Obrador "needs to have a little more compassion ... we’re going out of necessity. We’re not going for ambition.”