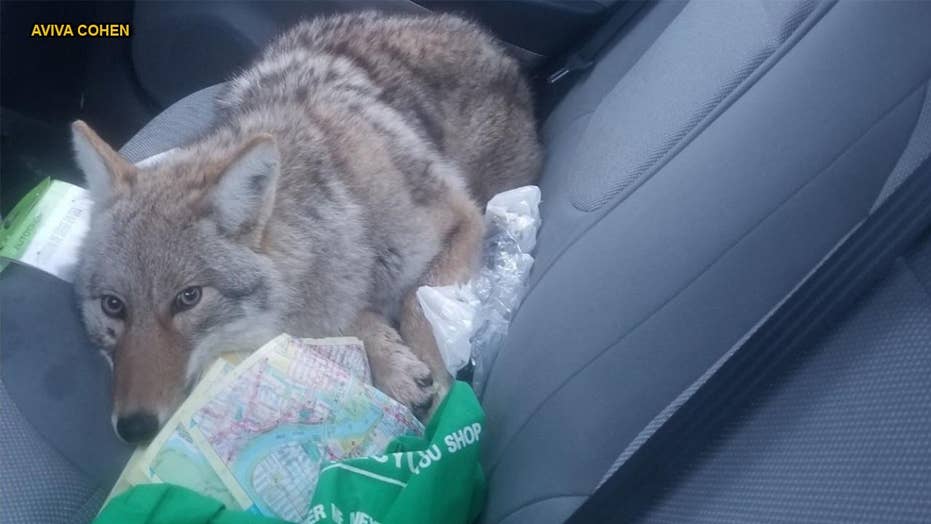 A Canadian man who struck a dog with his car last week was surprised to find out it was actually a young coyote. The coyote is in good health and will be released back into the wild in the coming weeks.

A Canadian man who hit a dog with his car last week and brought it to safety was "extremely surprised" to find out it wasn't a dog — but a young coyote.

Eli Boroditsky was driving to work the night shift in Manitoba on Nov. 27, going at around 55 mph, when he said the animal popped up on the highway, right in front of his car. When he hit the coyote, he "thought it was a German Shepherd or a husky."

He told CBC News he pulled off to the side and walked over to the shoulder lane, where the coyote was laying, stunned after being hit.

The animal Eli Boroditsky hit with his car last week was a coyote, not a dog like he thought. (Aviva Cohen)

"I was hesitant to leave it lying there because [I was] thinking that it was a dog and there might be wild animals around, it might get hurt," Boroditsky said, noting he "didn't think it was a wild animal."

So he picked up the coyote and put it in the back seat of his car. He told the news outlet, "It is amazing how docile it was. I was petting it."

Boroditsky said he was driving around 55 mph when he hit the animal on a highway in Manitoba, Canada. (Aviva Cohen)

It wasn't until a co-worker saw the coyote in Boroditsky's car that he learned it wasn't a dog, but rather a wild coyote. The next day, a wildlife conservation officer transported it to the Wildlife Haven Rehabilitation Centre, where the animal is recovering.

OKLAHOMA WOMAN MISTAKES COYOTE FOR DOG, AWAKES TO WILD ANIMAL IN BEDROOM: 'HE LUNGED AT THE DOOR'

Animal rescuers said the coyote only suffered from a few cuts on its body and is in good health. It will be released back into the wild in the coming weeks.

The center's executive director, Zoe Nakata, warns against picking up wild animals, regardless of the situation.

"If an animal is large and is a predator – if their behavior and natural behaviors are aggressive – then we always, always ask people to be cautious and to call people to help," she told the news outlet. "If you're not sure, just give us a call and sometimes we do tell people just put a towel around it, put it in a box and drive it to the center."

Boroditsky, for his part, said he really did think the coyote was a dog and was worried "that if a preying animal came by, it would kill it."