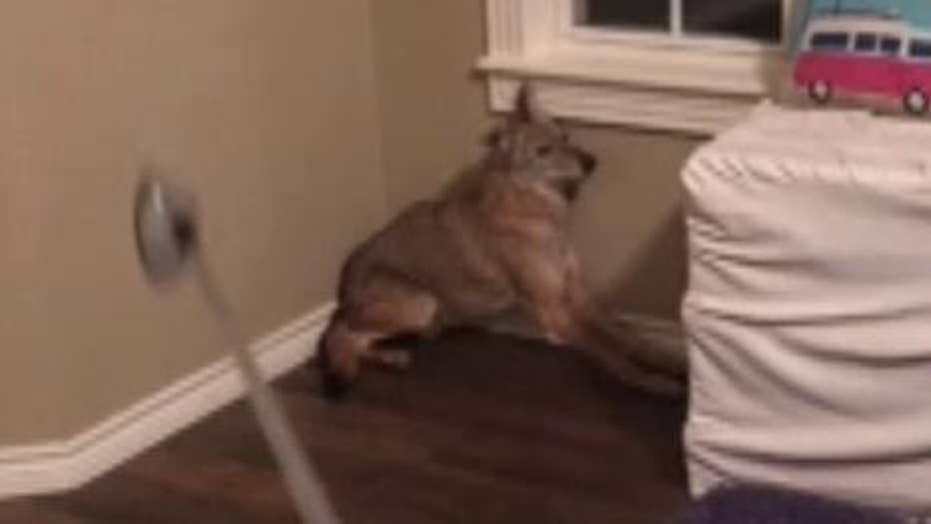 Oklahoma woman wakes up to find a coyote in her bedroom

Bonnie Moriarty was sleeping when a noise woke her up, then her cat and a wild coyote entered her bedroom.

When Bonnie Moriarty heard her cat hiss in the middle of the night, she assumed her dog picked a fight with the feline. Moments later, the cat ran inside her bedroom — with a large animal trailing behind it.

At first, Moriarty assumed her dog was chasing the cat. But as she took a closer look, she realized it wasn't her pup after all: it was a coyote.

"I woke up and the cat and the coyote (ran) into my room. It was still dark," Moriarty, of Bixby, Oklahoma, told Fox 23.

Moriarty first heard what she described as a "cat fight" around 4 a.m. She flipped on the lights and located the creature, sitting in the corner of her room. Quickly, Moriarty grabbed a golf club for protection.

"My husband was out of town and my poor kids were upstairs, and I'm screaming," she described to the news station.

Moriarty's Miniature Schnauzer soon ran into the room and started barking at the wild animal, but the coyote remained calm and didn't respond. It simply crouched down on the floor and stayed still.

"That's when I realized, 'Holy crud, I've got a coyote stuck in my bedroom,'" Moriarty recalled.

The Oklahoma mom called 911 for backup and three officers arrived on the scene shortly after.

The Bixby cops, equipped with a catcher pole, surrounded the animal and placed the loop around its neck. They managed to pull the creature out of the bedroom and released it safely in a wooded area nearby.

Moriarty believes the coyote, enticed by her cat, managed to get through her back door.