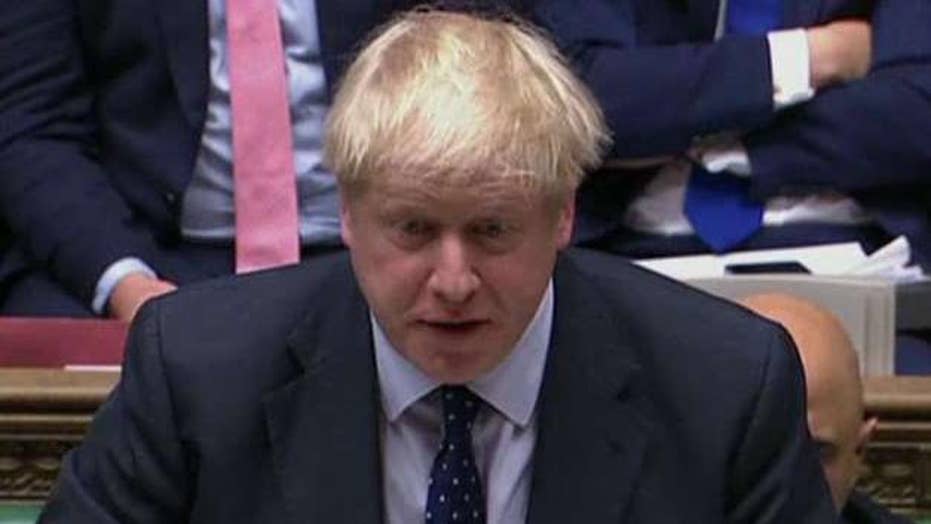 Prime Minister Boris Johnson faces deadline to convince members of Parliament sitting on the fence to back his proposal; Benjamin Hall reports from London.

A crucial vote on U.K. Prime Minister Boris Johnson’s Brexit deal was torpedoed on Saturday by a last-ditch bid by anti-Brexit MPs to derail it hours before lawmakers were due to cast their votes -- as thousands protested outside Parliament.

An amendment passed 322-306 that would require Johnson to apply for a delay to Britain's Oct. 31 departure from the bloc if the deal passed, something that Johnson said he would not do.

The rare Saturday session of Parliament - dubbed "Super Saturday" - was surrounded with both drama and a cloud of unknowns ahead of the vote expected late in the day, and comes just days after Johnson had secured a new withdrawal agreement with European leaders during the week, ahead of Britain’s scheduled departure from the bloc at the end of the month.

Lawmakers on both sides of the issue had warned of the danger of leaving without a deal, and Johnson had hailed the agreement as one that would satisfy hardline Brexiteers while making sure that the U.K. did not crash out of the bloc. It would have also allowed the U.K. to leave at Oct. 31.

"I will not negotiate a delay with the E.U. and neither does the law compel me to do so," he said, adding that the government would introduce the legislation next week to get his deal again over the line.

As lawmakers debated the measure, thousands of mostly anti-Brexit protesters marched through the streets of London. Many of them were calling for a second referendum -- something that those opposed to Brexit have been calling for since shortly after the first referendum in 2016, where 52 percent of voters chose to leave.

While polls show Johnson’s Conservative Party leading comfortably in the polls, there is a strong alliance of anti-Brexit parties in Parliament, and polls suggest that the public is still mostly split down the middle on Britain’s departure from the E.U. 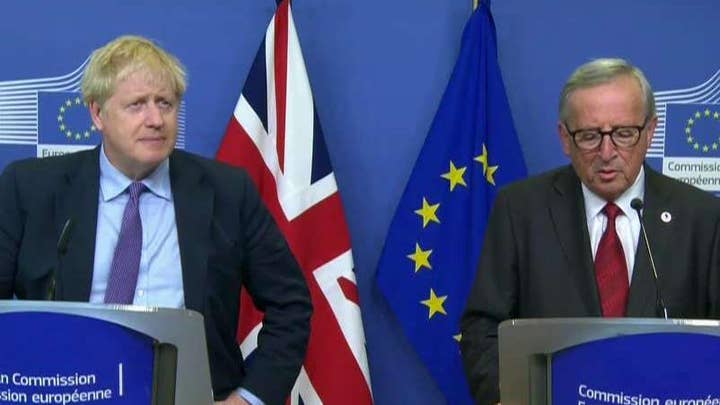 Supporters of the amendment that passed, put forward by independent (and former Tory) MP Oliver Letwin, said it will remove the risk that the U.K. could still fall out of the bloc by mistake if there was a problem getting through Parliament the formal legislation needed to implement the deal.

But it requires Johnson, who has repeatedly promised that Britain would leave the E.U. on Oct. 31., to request a delay to the departure date. European leaders have said that there would be no further delays now that there is a deal on the table.

"I want us to finish this off and speak about the future," French President Emmanuel Macron said on Friday. "The Oct. 31 date must be respected. I don't believe new delays should be granted."

Even without the amendment, getting the deal passed is a daunting task for Johnson. His party holds only 288 seats in the 650-seat House of Commons, so will require support from pro-Brexit MPs in other parties -- while limiting defections within his own.

It was a task that evaded former Prime Minister Theresa May, who failed to get her own deal through on three separate occasions before she resigned in the summer.

Johnson’s deal differs from the May’s deal on the crucial aspect that it abandons the controversial backstop proposal that would have seen the U.K. kept in a customs union until a formal trade deal was made. The backstop was made to prevent a hard border between Northern Ireland (which is part of the U.K.) and Ireland -- which is remaining within the E.U.

But in Johnson’s deal a special status is created for Northern Ireland which allows it to keep an open border with Ireland but while keeping unity with the rest of the U.K.