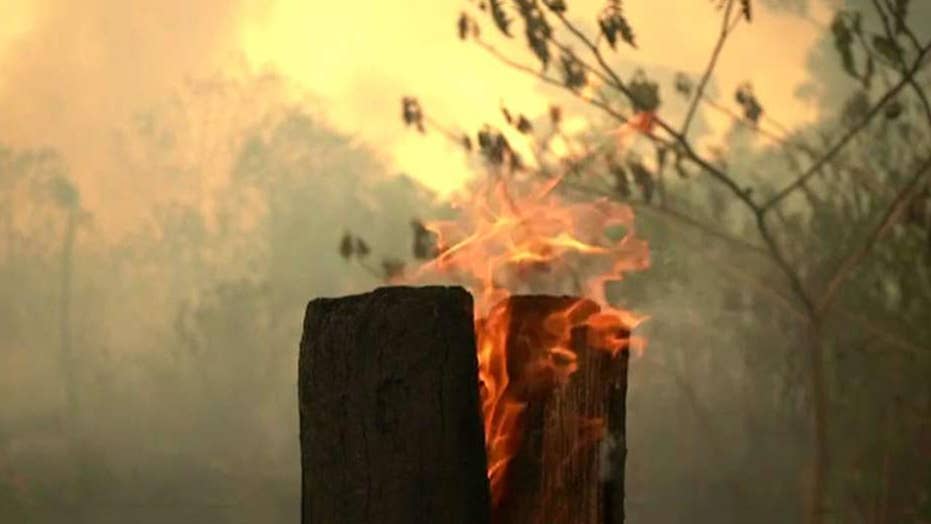 Trump: US 'ready to assist' Brazil with Amazon rainforest fires

World leaders are urging action from G7 on the burning of the Amazon rainforest.

As Brazil’s Amazon fires continue to take center stage, another South American nation is battling its own catastrophic blazes, which have destroyed an area of land nearly as large as Lebanon.

The Chiquitanía region of southeastern Bolivia, consisting of dry forest, farmland and open prairies, has seen the greatest damage from the nearly 40,000 fires that have charred 3,700 square miles to date, according to the country’s National Forests and Lands Authority.

The fires, which have now spread to Bolivia’s share of the Amazon, have destroyed $1.1 billion worth of timber.

Soldiers work to put out a forest fire in the Chiquitania Forest of Quitunuquina near the Robore, Bolivia, Monday, Aug. 26, 2019.  (AP)

Over two square miles of forestry in the northeastern region of Bení have been scorched so far and officials are fearful that a fire in Bolivia’s Amazon could threaten the indigenous communities.

Fernando Vargas, an indigenous leader in the Isiboro Sécure Indigenous territory and national park, told The Guardian that fires present one of the largest threats to “biodiversity in Bolivia,” adding that the fires were “man-made” and not a natural occurrence.

Others throughout the country have also argued that Bolivia’s president, Evo Morales, is to blame.

On Saturday, several helicopters along with police, military troops, firefighters and volunteers on the ground worked to extinguish fires in Bolivia's Chiquitania region, where the woods are dry at this time of year. Farmers commonly set fires in this season to clear land for crops or livestock, but sometimes the blazes get out of control.  (AP)

Morales signed a measure in July allowing controlled burns and clearing of lands. While people were supposed to obtain prior permission, authorities said most of the fires had been started illegally.

On Tuesday, Morales was in one of the affected regions overseeing firefighting efforts involving more than 3,500 people, including soldiers, police and volunteers.

Morales has also agreed to receive aid from the international community, unlike Brazilian President Jai Bolsonaro. Bolivia contracted the world's largest firefighting tanker plane from the U.S. this week in addition to receiving two helicopter tankers from neighboring Peru.

A helicopter lifts off from a military airport Robore, Bolivia, with water to drop on the Chiquitanía Forest as the military fights forest fires, Sunday, Aug. 25, 2019. (AP)

He has since said he will consider the offer pending an apology from France regarding comments he deemed offensive.