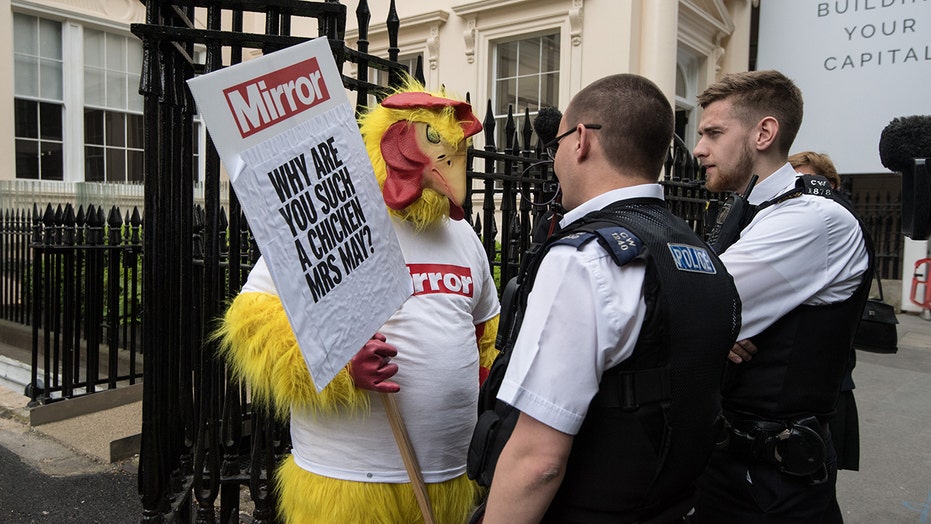 The new British prime minister’s new head of communications was part of a running gag that saw him ruffle the feathers of Conservative Party politicians while dressed up as a giant chicken.

The Daily Mirror revealed Monday that Lee Cain, who has been appointed as Boris Johnson’s chief spin doctor, worked as a journalist for the left-leaning tabloid newspaper.

As part of an ongoing gag, Cain was deployed to the streets dressed up as the Mirror Chicken and tasked with taunting and ridiculing Tory lawmakers during public appearances.

Conservative Party leader David Cameron walks around Tamworth in Staffordshire followed by a man dressed as a chicken, working for the Daily Mirror newspaper. (Photo by Johnny Green/PA Images via Getty Images)

His former employer said it was Cain who famously taunted “David Cameron and his Tory chums as they ducked questions in the run-up to the 2010 general election.”

“It’s hard to believe,” one ex-colleague told the Daily Mail, while another said, “Lee was actually a great Mirror Chicken.”

“He attacked the role with real zeal and a great passion,” the colleague continued. “The newsdesk was so impressed with his work he was used on a number of occasions.”

The colleague said he remembered Cain “prancing around” the newsroom in his full chicken outfit.

“It’s hard to believe that a man with his past of taunting the cowardly Tories is now such a powerful figure inside No. 10,” the colleague said.

Police officers speak to a Daily Mirror campaigner dressed as a chicken outside a venue where then Chancellor of the Exchequer, Philip Hammond and Secretary of State for Exiting the European Union, David Davis, were due to speak (Getty)

The 38-year-old Cain served as Johnson’s press aide in the Foreign Office and during his successful Conservative party leadership campaign. He previously worked as the head of broadcast for the Vote Leave campaign and had other jobs in the government.

Cain will be responsible for determining Johnson’s message in public, according to the Guardian.

A day after the Daily Mirror’s “eggclusive”, Johnson was snapped inspecting a free-range egg farm in Newport, Wales.

Johnson became prime minister last week after winning a Conservative Party leadership contest by promising the strongly pro-Brexit party membership that the U.K. will leave the EU on the scheduled date of Oct. 31, with or without a divorce deal.