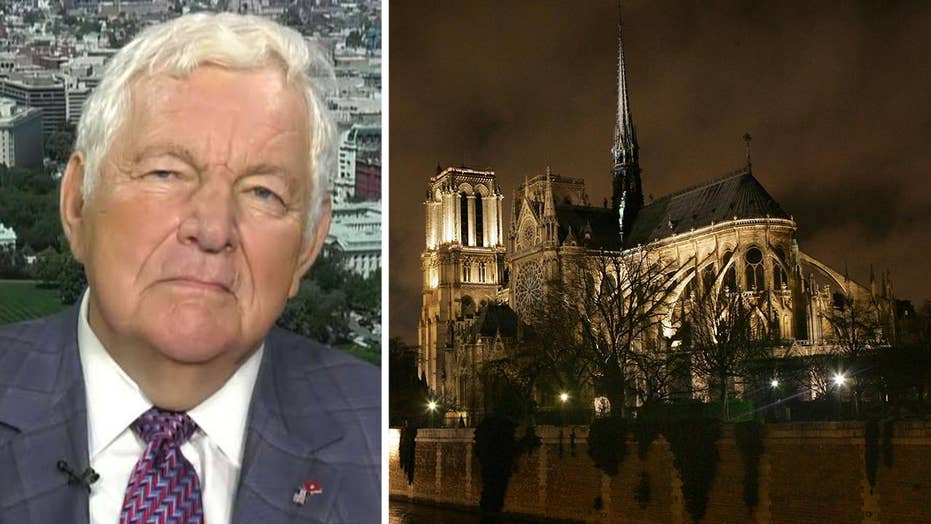 Bill Bennett: Important to remember and embrace the history of Notre Dame

The Notre Dame is more than just a building - it's a representation of Western civilization - and it's crucial to remember its significance as parts of the 850-year-old structure crumbled in a devastating fire on Monday, former education secretary Bill Bennett said.

The cathedral – immortalized in Victor Hugo’s 1831 novel “The Hunchback of Notre Dame” – was undergoing a massive $6.8 million renovation project when the blaze broke out. It was an effort to turn back the clock on centuries of neglect of the beloved monument.

"This is not just a building, this is a building that represents Western civilization," Bennett said during an appearance on "America's Newsroom" on Tuesday.

"As a former education secretary, I could build an entire course on civilization just by talking about that cathedral," he added, before discussing the centuries of art, history, music, and philosophy that have become associated with the Notre Dame.

NOTRE DAME CATHEDRAL BEING INVESTIGATED AS AN ACCIDENT FOR NOW, PROSECUTORS SAY

Bennett added the architecture of the building itself is revered because it draws the eyes upward, which was done intentionally to make visitors and worshippers look towards the sky and reflect on "creation and The Creator."

"The cathedral itself is a miraculous construction. It's old and it's venerable and it houses so many stories," he continued. "A lot of history walks around there and it's important to remember it."

He then went on to detail a number of the iconic moments in world history which have taken place at the cathedral itself. It is where Joan of Arc was canonized, Napolean Bonaparte became the emperor of France, and Charles De Gaulle sat to celebrate mass at the end of World War II. It also houses what is believed to be the Crown of Thorns, which Jesus wore in the moments leading up to his crucifixion.

The Crown of Thorns was saved during the blaze on Monday by a priest who formed a human chain to enter the chapel and rescue it, along with other relics.

Repairing the cathedral in the wake of the blaze — including the 800-year-old wooden beams that made up its roof — presents challenges.

The cathedral's roof cannot be rebuilt exactly as it was before the fire because "we don't, at the moment, have trees on our territory of the size that were cut in the 13th century," Bertrand de Feydeau, vice president of preservation group Fondation du Patrimoine, said.

He said the roof restoration work would have to use new technologies.