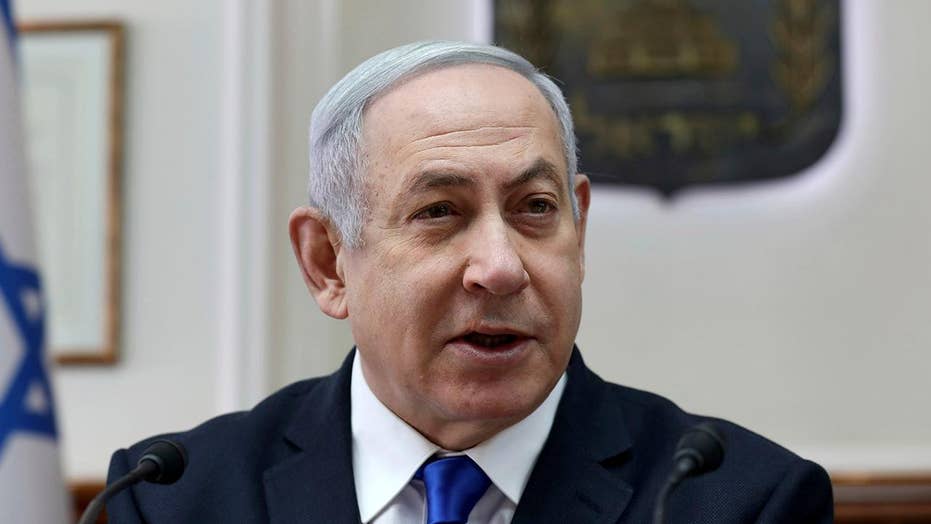 The culmination of the three-year investigation marks the first time a sitting Israeli prime minister has been charged with a crime.

Several political leaders in Israel called on Prime Minister Benjamin Netanyahu to resign after he was formally charged Thursday in a series of corruption cases.

Shortly after the announcement, Israel’s centrist Blue and White party, headed by Benny Gantz, Netanyahu’s main political challenger, tweeted a video of Netanyahu reportedly from 11 years earlier, in which he called on the prime minister at the time, Ehud Olmert, to resign amid corruption allegations.

“A prime minister who is immersed in investigations has no moral or public mandate to make fateful decisions for the State of Israel,” Netanyahu said about Olmert in the video.

“Because, there is a concern, I must say, real and not unfounded, that he will make decisions based on the personal interest of his political survival, and not on the national interest.”

Olmert stepped down before he was indicted on corruption charges a decade ago. He later served 16 months in prison for fraud and bribery.

The allegations against him included suspicions that he accepted hundreds of thousands of dollars in champagne and cigars from billionaire friends, offered to trade favors with a newspaper publisher and used his influence to help a wealthy telecom magnate in exchange for favorable coverage on a popular news site.

Netanyahu, in response, said the indictment stemmed from “false accusations” and a systematically “tainted investigation.” He claimed to be the victim of a witch hunt involving political rivals, the media, police and prosecutors, all pressuring a “weak” attorney general, The Times of Israel reported.

Attorney General Avichai Mandelblit on Thursday rejected suggestions that the indictment was politically motivated, saying it was a “heavy-hearted decision” based solely on professional considerations.

Gantz tweeted on Thursday that it was “a very sad day for the State of Israel.”

He later responded to Netanyahu’s claim accusing his opponents of trying to carry out an “attempted coup” against him by tweeting, “I have full confidence in law enforcement agencies led by Attorney General Avichai Mandelblit. I am sure that they do their work faithfully, honestly and professionally. There is no government coup in Israel but consolidation in power.”

Gantz also said Netanyahu should focus on his legal affairs.

“He, too, knows that the great and complex challenges facing the State of Israel, both in the security arena and in the social and economic arena, require a prime minister to invest all his time, energy and power,” Gantz wrote in another tweet.

The leader of left-wing political alliance Democratic Camp, Nitzan Horowitz, reportedly said, “Netanyahu must go now. For the sake of the citizens of Israel and the state, he cannot stay in power for one more minute.”

He continued, “Those who cling to their blind loyalty to him will be remembered as having helped in the most serious corruption yet of Israeli democracy, and of directly hurting the country,” as The Times of Israel reported.

Labor-Gesher leader Amir Peretz instructed his party’s lawyers to petition the High Court of Justice to discuss the legal situation of a prime minister under indictment.

He also reportedly said the “political crisis in Israel” was only because of his indictments.

“If we can prevent Netanyahu from clinging to power, we will be able to prevent a third election in under a year,” Peretz added, as the Times reported.

Thursday’s decision came at a tumultuous time for Israel. After an inconclusive election this past September, both Netanyahu and Gantz have failed to form a majority coalition in parliament. It’s the first time in the nation’s history that this has happened.

Ayman Odeh, the head of a joint list of Arab parties in parliament, whom Netanyahu reportedly labeled a “terror supporter” along with other Arab lawmakers in his recent election campaigns, reacted to Thursday’s news in a tweet.

“On the day that Netanyahu pays for his criminal crimes, we can begin to repair the damage he caused with his social crimes. The racism and hatred that he caused will not go away with his behavior, and it is up to us - Arabs and Jews - to build a peaceful society together and an equitable democracy that will serve all citizens of the country,” Odeh said.

The head of the midsize Yisrael Beytenu party, Avigdor Liberman, said Thursday was “a difficult day for the State of Israel.” Liberman had said he refused to join a coalition led by Netanyahu because it included his ultra-Orthodox allies, which triggered this year’s repeated elections.

“We have to allow the justice system to do its job and give the prime minister the opportunity to prove his innocence in court,” he tweeted.

In a statement, the ultra-Orthodox Shas party reportedly said its members still supported Netanyahu and believed his innocence will be proven.

“Many feel that Prime Minister Netanyahu, a man who has dedicated his entire life to Israel, doesn’t deserve what happened tonight,” Bennett tweeted. “It is important to remember his great contributions. He is the prime minister of Israel, and he still enjoys the presumption of innocence. During this turbulent period, we will continue to keep Israel safe, united and strong.”

Israel entered an unprecedented 21-day period in which any member of parliament could try to rally a 61-member majority to become prime minister. If that were to fail, new elections would be triggered early next year.

Greg Norman and The Associated Press contributed to this report.