A satellite image taken this week shows the aftermath of a massive U.S. bombing campaign against an “ISIS-infested” island in northern Iraq.

American jets dropped more than 80,000 pounds of laser-guided bombs on Qanus Island on Tuesday. The new image from Planet Labs, Inc., shows smoking craters in decimated areas that were previously covered in green foliage and forest.

Qanus Island in Iraq as seen in May 2019 prior to the U.S. airstrike on Sept. 10, and a satellite image showing the island after the strike that day. (Satellite images courtesy of Wim Zwijnenburg and Planet Labs, Inc.)

The bombing was meant to destroy an area the Islamic State (ISIS) terror group was using for operations in the region, U.S. officials said. Iraqi forces searched and cleared the area following the bombing.

Wim Zwijnenburg, a senior researcher at PAX, a Dutch nongovernmental organization specializing in conflict and the environment, told Fox News that historical images show the island doesn’t have any structures, indicating it’s unlikely there are underground facilities.

Qanus Island in Iraq as seen on Google Earth prior to the U.S. airstrike this week, and a satellite image showing the island after the strike. (Satellite image courtesy of Wim Zwijnenburg and Planet Labs, Inc.)

Zwijnenburg said the island, on the Tigris River south of Mosul, has been targeted in the past. The nearest U.S. military presence is at Qayyarah Airfield West, about 10 miles away; it's occupied by the U.S.-led coalition battling the terrorist group.

A spokesperson for the Iraqi Counter Terrorism Service (CTS) told Business Insider that some 25 ISIS fighters were killed on the island, which they used “like a hotel” when traveling from Syria to Iraq. U.S. officials have also said the island is a “major transit hub” for ISIS fighters in and out of Syria. 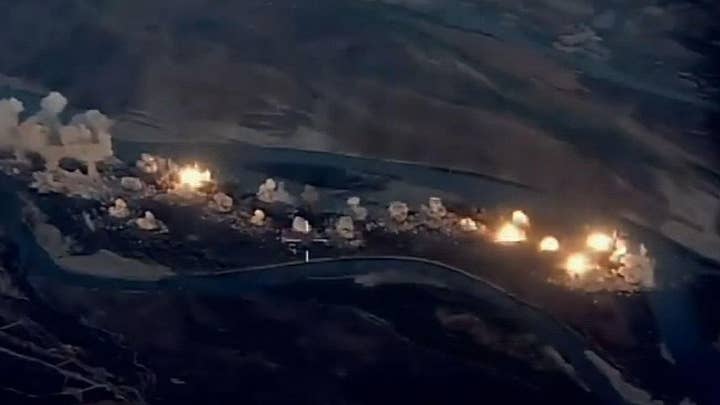 "Follow-on ground clearance operations were conducted by the 2nd Iraqi Special Operations Forces Battalion to dismantle a major transit hub for Daesh [ISIS] members moving from Syria and the Jazeera desert into Mosul, Makhmour and the Kirkuk region," he said.

U.S. jets have doubled the number of airstrikes targeting ISIS in the past month, according to new U.S. Air Force strike data. American jets have dropped 28 percent more bombs on the Taliban and an ISIS affiliate in August than they did in the previous month.

In August, 800 bombs were dropped against targets in Afghanistan – the most since November 2018.

Sen. Tom Cotton, R-Ark., questioned Thursday why an F-35 fighter would be used in this week's attack. “I have real concerns about using a fifth-generation [F-35 stealth] aircraft to strike a bunch of terrorists hiding in the bushes,” he said during a Senate Armed Services Committee hearing.

U.S. military officials say operations against the Taliban in Afghanistan could ramp up after the militant group claimed responsibility for two recent bombings in Kabul that killed dozens, including an American soldier. President Trump canceled planned high-level meetings this past weekend at Camp David with the Taliban and Afghan government over the attacks.