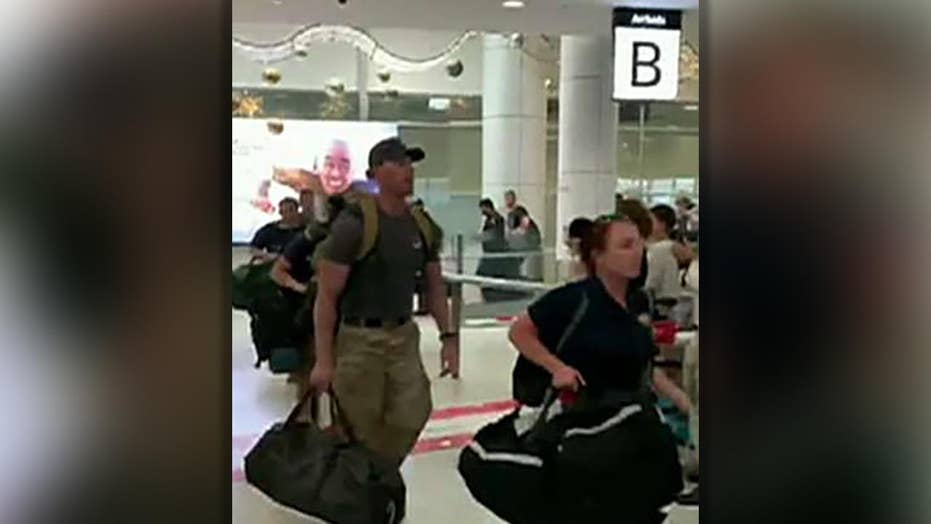 US firefighters cheered when arriving in Sydney

American firefighters got a hero’s welcome in Australia.

Dozens who arrived at Sydney International Airport this week to assist in battling a series of devastating wildfires were met with cheers from a crowd that had amassed at the terminal.

“Coming through, all gathered gave a spontaneous & lengthy round of applause, reflecting the gratitude & admiration we all have for their generosity,” tweeted Shane Fitzsimmons, the commissioner of the New South Wales Rural Fire Service.

His agency warned Friday that forecasted wind gusts could “cause erratic fire behavior over many firegrounds.” As of 6 p.m. local time, more than 3,300 firefighters were battling 137 blazes across Australia, 66 of which have not been contained, it added.

A yacht sails past a burning woodchip mill as the wildfires hit the town of Eden, New South Wales, Australia, on Friday. (AP)

The National Interagency Fire Center in Boise, Idaho said the more than 100 firefighters from the U.S. that arrived Thursday will join 159 already in Australia. It's the largest-ever deployment of American firefighters abroad.

The most recent contingent includes crews that fight fires on the ground, based in the U.S. Forest Service's Angeles National Forest in California.

Carrie Bilbao, spokeswoman for the National Interagency Fire Center, told The Associated Press the next group will also include more ground crews and that they are receiving training about venomous snakes and insects they might encounter.

Half a billion animals have been killed in the Australia wildfires with many others have been left injured and motherless; Anna Kooiman reports from Sydney Wildlife Rescue.

Most of the fire danger is centered on New South Wales and Victoria, Australia’s most populous states, where temperatures and wind speeds were escalating Friday after a few days of relatively benign conditions.

The NSW Rural Fire Service said that coastal towns south of Sydney, including Eden, Batemans Bay, and Nowra, could again be under threat weeks after losing homes to the fires.

Fitzsimmons added there is “a long night still to go, for all our firefighters and those affected by the fires.”

In the New South Wales town of Candelo, Nathan Barnden, a divisional commander with the Rural Fire Service, was preparing to head to the nearby township of Burragate with his team to protect the community from a fire that was marching north from the Victoria border. The fire had breached containment lines in one area, and officials were worried that predicted winds of 40 to 60 miles per hour could push it into populated areas.

“We’re preparing for the inevitable risk that those towns may come under threat and if they do, we’ll be there to help defend them through the night,” Barnden said. “We’ve been warned that we could be up there ‘til the morning. … There is a risk that we’ll be cut off and we’ll have to stay there throughout the time.”

In neighboring Victoria, evacuation orders were issued in alpine areas, and Premier Daniel Andrews pleaded with residents to heed alerts and avoid complacency even though no fresh destruction was being reported.

The crisis so far has claimed at least 26 lives, destroyed more than 2,000 homes and scorched an area twice the size of the U.S. state of Maryland since September.