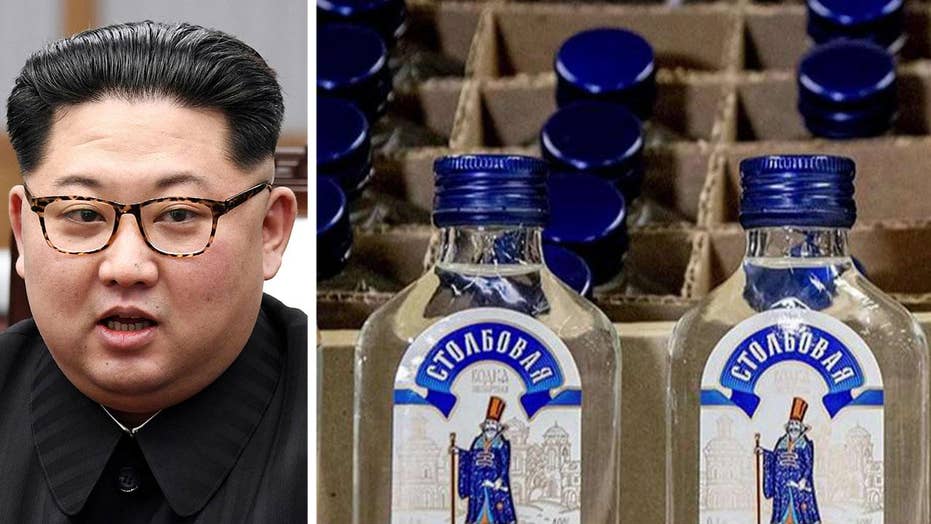 Dutch authorities intercept 90,000 bottles of booze on its way to North Korea

The Russian-made vodka Stolbovaya was believed to be heading to North Korea for Kim Jong Un and his top generals.

Looks like Kim Jong Un will need to toast the success of his summit with Donald Trump with something other than vodka.

Dutch customs officers seized 3,000 cases of the Russian-made vodka Stolbovaya believed to be heading to North Korea for Kim Jong Un and his top generals on Friday, officials announced on Tuesday. The cargo of 90,000 bottles was discovered in a Chinese container ship, the Telegraph reported.

The shipment, which violates U.N. sanctions on North Korea, was reportedly hidden inside an aircraft fuselage.

Picture shows vodka bottles that were seized by the customs authorities in the port of Rotterdam, on February 26, 2019. (Getty Images)

Customs office spokesman Roul Velleman confirmed the seizure, but did not elaborate on why Dutch officials believe it was intended for the North Korean despot.

Dutch Overseas Trade Minister Sigrid Kaag congratulated the customs officials on the interception, saying: "The U.N. Security Council has imposed clear sanctions on North Korea and it is important to enforce them."

Timofei Urban, the head of alcohol manufacturer Niva that produces the confiscated alcohol, told the Moscow Times the company received the massive order but denied knowing it was headed for North Korea.

"I only heard about the North Korea news today from the Dutch papers," Urban said.

He added that the company produces “vodka to places all over the world, including South Korea,” but insisted “never to North Korea.”

News of the seized alcohol comes as Kim and President Trump are set to meet in Hanoi for their second summit in less than a year. The two leaders, who arrived in Vietnam just hours apart, are expected to discuss several topics, specifically North Korea’s commitment toward denuclearization.

But the Hermit Kingdom has been adamant about keeping its missiles and nuclear weapons until the U.S. lifts sanctions that have been crippling the North’s economy.

Previous intercepted shipments that were headed to North Korea include Champagne, cheese and televisions, the Telegraph reported.