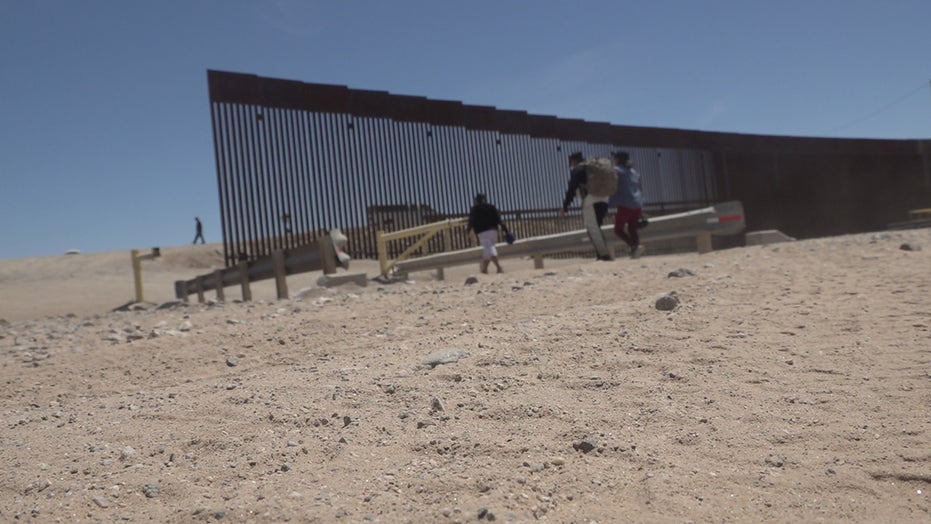 'We're going to get this backlog': Gaps in Yuma border wall leading to flood of illegal migrants

Yuma, Arizona, has three holes in its border wall totaling about seven miles. Migrants can walk through the wall at any time of the day. It’s becoming overwhelming for border patrol to manage.

YUMA, Ariz. – A farmer near the border between Mexico and Yuma, Arizona, says every day he's seeing migrants crossing through gaps in the wall.

"It’s very taxing for a community that’s built for 200,000 to have this many people show up at your doorstep in need," the farmer, Cory Mellon, told Fox News Digital.

"Yuma has a hole in the fence," Mellon added. "California doesn’t have any holes. So, therefore, they’ve shifted here, and they’ve started coming through here. It’s made it very easy for them to do."

Migrants trying to cross the border into Yuma from Mexico. (Fox News)

Yuma has three holes in the wall totaling about seven miles. Migrants can walk through the gaps at any time of the day, and the situation has become overwhelming for Border Patrol to manage.

"They’re overworked, they’re stressed," said Yuma Mayor Douglas Nicholls. "They’re not even doing the job that they’ve joined up to do. Their passion, their mission is to protect the border, to secure the border, not to handle irregular immigration."

Mellon and his workers are worried about how many migrants are able to come across the border illegally. He’s seeing more on his farm since the turn of the year and says it’s not safe for his workers or for the migrants traveling in dangerous conditions.

Yuma residents at the gap in the border wall into Mexico. (Fox News)

"There’s definitely people in these groups that are trying to find a better way of life," Mellon said. "Again, we have a legal system to do that. That’s what we should be doing."

Migrants who come through Yuma frequently have tried to make it to Phoenix or Tucson. Nicholls said if migrants keep coming at this rate, it could overwhelm the whole system.

"We’re going to get this backlog, this pushback of just the network not being able to handle this flow from other areas," Nicholls said.

Over the last couple of months, the number of migrants only seems to be increasing.

"They’re going to be looking for resources, food, shelter and, eventually, transportation."

Jake Karalexis joined Fox News in 2022 as a multimedia reporter in Seattle.