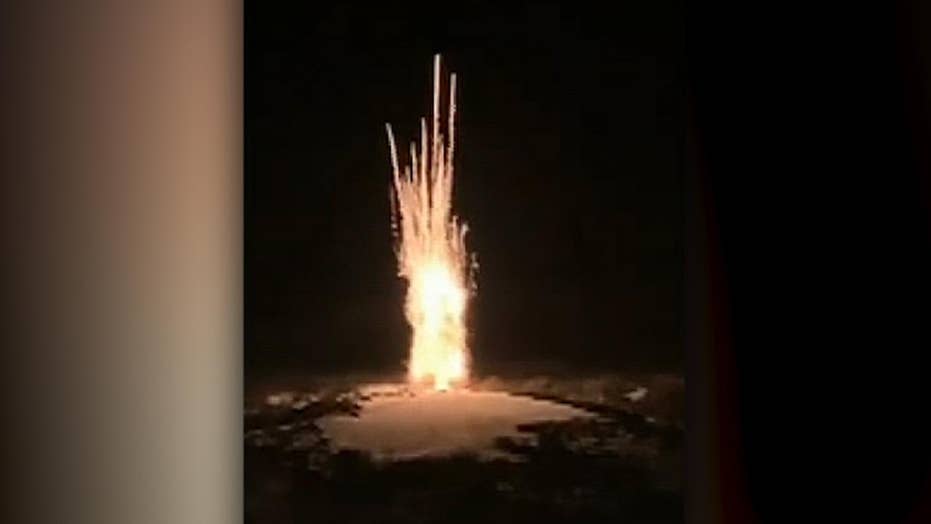 Raw video: Man's attempt to launch a 62-inch diameter shell from the top of the Howelsen Hill Ski Area in Steamboat Springs doesn't go as planned.

A Colorado man's six-year effort to launch the world's largest aerial fireworks shell went up in smoke on Saturday when it exploded too early.

Tim Borden, a pyrotechnics expert, had tried to launch the firework with a diameter of 62 inches from the top of the Howelsen Hill Ski Area in Steamboat Springs.

The firework was supposed to shoot a mile into the sky before combusting -- but the shell malfunctioned while attempting to launch from the mortar, the Steamboat Pilot & Today reported.

Video posted to Facebook showed the moment the shell exploded, lighting up the night sky and sending sparks shooting upward.

MOUNTAIN LION CHOKED BY COLORADO RUNNER AFTER MAULING WAS LATER EATEN BY OTHER ANIMALS, OFFICIALS SAY

Borden told the paper in a previous interview that success wasn't guaranteed.

“There’s no data to tell us how much explosives to put underneath 2,500 pounds to get it sufficiently up in the air to explode and have everybody see it,” he told the Pilot & Today at the time.

KENTUCKY WOMAN DISFIGURED IN FIREWORK ACCIDENT RECALLS 'DEVASTATING' ORDEAL: 'I WAS IN THE WRONG PLACE AT THE WRONG TIME'

Borden's team had spent years testing larger fireworks, including a 48-inch shell that was the largest ever launched in North America. Building the shell used in the failed attempt Saturday took a month of 8-hour workdays, according to the paper.

Nine people were hurt when the unmanned balloon burst into flames and crashed to ground during a festival to end the rainy season in Burma.

"If setting a world record was easy, a lot more people would do it," he told the Pilot & Today.

Even with the failed attempt, Borden vowed to try again next winter.