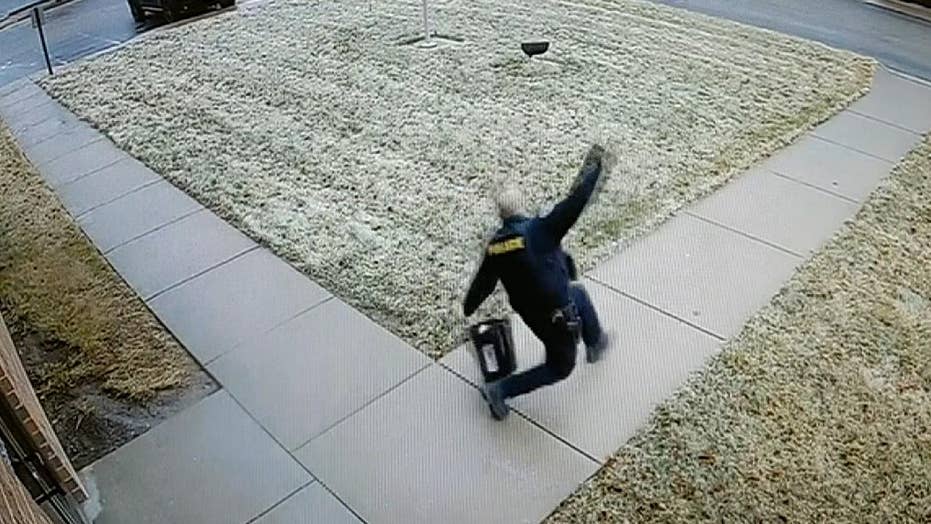 Raw Video: Officers at Beloit Town Police Department find out the hard way that icy grounds can be dangerous.

Several police officers in Wisconsin found out the hard way over the weekend that slippery, icy ground can actually be very dangerous.

The city of Beloit Police Department shared two videos to Facebook on Saturday of officers slipping on the ice as a storm brought wintry conditions to parts of the Midwest.

"The roads, parking lots, and sidewalks are slippery! Even the police fall victim to the ice," the department said. "Please be careful when you are outside this weekend."

In one of the videos, one officer can be seen slipping on a sidewalk and falling before he had the chance to throw salt on the frozen walkway.

A police officer can be seen slipping and falling on black ice over the weekend in Wisconsin. (Beloit Police Department)

In another video posted by the department, an officer can be seen falling while walking to a vehicle outside.

No officers were injured in either video, the department said.

"We are both just fine," the department said in a comment on the video. "Figured everyone could use a little laugh at our expense and serve as a reminder to be careful today."

The officers both took tumbles as a storm over the weekend brought hazardous conditions to the Midwest and left at least 11 dead as it moved east, creating dangerous travel conditions such as black ice. According to the National Weather Service, black ice is defined as patchy ice on roadways or other transportation surfaces, such as sidewalks, that cannot easily be seen.

"It is often clear (not white) with the black road surface visible underneath," according to the NWS. "It is most prevalent during the early morning hours, especially after snow melt on the roadways has a chance to refreeze over night when the temperature drops below freezing."

Video: Drivers Spin Out on Black Ice in OH

Black ice may also form when roadways or walkways are slick from rain and temperatures drop below freezing overnight.

Dr. Joel N. Myers, CEO of AccuWeather, told Fox News in December that when there is a flash freeze, water on untreated surfaces can form "black ice."

If the water present is very thin and on a surface such as black asphalt, it can be difficult to see, according to Myers.

"It can be extremely dangerous and very slippery," he told Fox News.