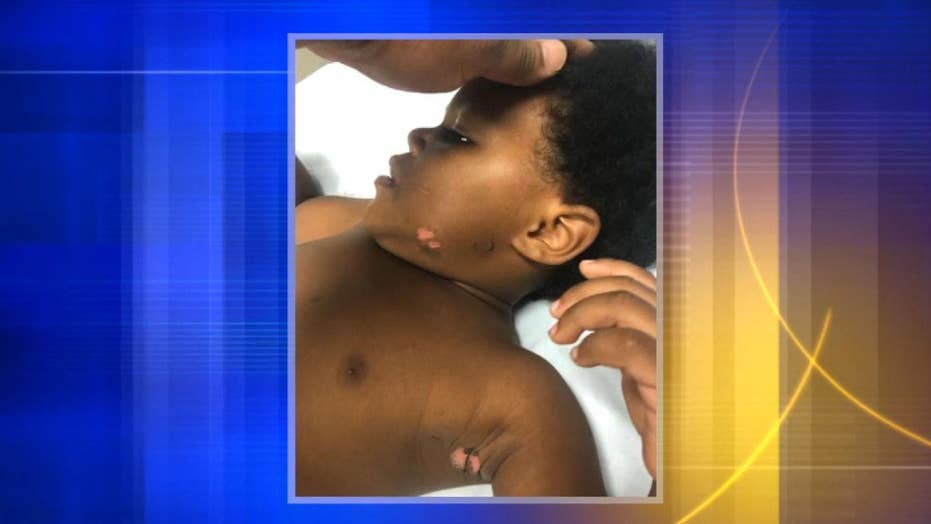 Raw video: Charges were filed against Lamont Powell, 30, of Milwaukee, after prosecutors say he admitted burning a 2-year-old boy with a lighter because he was “mad” at the boy’s mother.

A Wisconsin man was charged in connection with burning his girlfriend's 2-year-old son repeatedly with a lighter last month  — as the boy's father wants to create child torture laws in honor of his son.

Lamont Powell, 30, was arrested after the child, named Melo, was brought to a hospital on Sept. 23 and reportedly determined to have first- and second-degree burns from a lighter to his cheek, armpit, chest and stomach.

Melo was brought to the emergency room after his biological father, George Harrell, noticed the burns that day, the Milwaukee Journal Sentinel reported. Harrell said Melo "was mentally and emotionally distraught" when he picked him up.

"He'll be playing, then just stop and start whimpering, whining and touching his scars, and gazing off," Harrell told the news outlet. "I'm constantly picking him up, holding him, playing with him now, and he's making a recovery."

KANSAS MOM SENTENCED TO PRISON IN DEATH OF SON, 2, WHO REFUSED TO EAT HOT DOG

Powell told investigators that he and Melo's mother have a child together. He claimed that on Sept. 21, he was at home with both Melo and the other child when he got angry because Melo's mother wasn't answering her phone. He then allegedly burned the boy, repeatedly, with a lighter.

When Powell was shown a photo of Melo's injuries during the investigation by a detective, who described the injuries as torture, Powell allegedly agreed.

When Melo's mother got home on Sept. 21, she and Powell put Vaseline, a petroleum jelly-based product, on the boy's burns. Two days later, when Melo was left with his grandmother, the woman didn't believe the story they were telling about how Melo was injured — and reportedly refused to return the boy to her.

As soon as Harrell heard what happened, he said he called 911, and police met him at the boy's grandmother's house. Harrell said Melo's mom — who has not been charged — claimed Powell was forcing her to work as a prostitute, and alleged he was holding the boy hostage.

Harrell said he plans to reach out to legislators about creating "Melo's Law" to implement minimum mandatory penalties about torture to children.

"You can lose your temper, or have a bad day and commit abuse, that doesn't make you a bad person," Harrell said. "But to intentionally torture a child, that's a different mindset."

Online records from the Milwaukee County Sheriff's Office indicate Powell was charged with neglecting a child, child abuse and mayhem. He's being held on $10,000 bail.