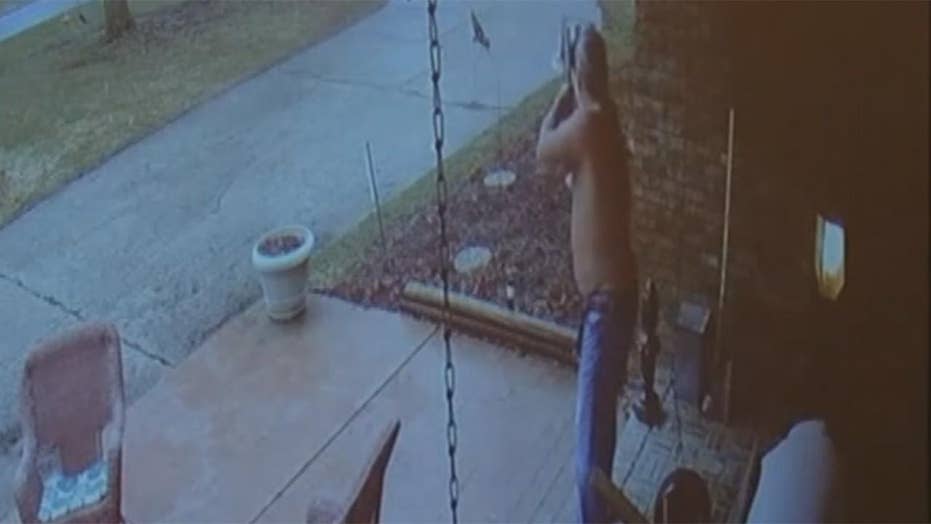 Jurors shown security footage of Jeffery Zeigler shooting shotgun at Brennan Walker during trial in Michigan. Zeigler is charged with assault with intent to murder.

The wife of a former Detroit firefighter charged with trying to shoot and kill a lost teenager looking for directions broke down in tears Thursday as she recounted that morning’s events in court.

Her husband, Jeffrey Zeigler, who is white, is charged with assault with intent to murder and faces up to life in prison in the attempted shooting of Brennan Walker, 14, a black teen.

Dana Zeigler testified that she became frightened when she saw Walker at her Rochester Hills home.

"What are you doing on my porch?" she recalled. "I saw a black person standing at my door and I screamed at him and I asked him what he was doing there."

She said Walker, who was wearing a skullcap and backpack, responded "I am on my way to school," and then attempted to open the front door.

Walker told authorities he missed his school bus and was trying to walk to Rochester High School when he cut through a subdivision and became lost.

Zeigler said she screamed for her husband, who was in a "dead sleep" from medication he took the night before. Zeigler rushed downstairs, and -- upon seeing Walker -- ran to his first-floor office and grabbed a 12-gauge Mossberg shotgun.

Security footage at the home captured the moment when a shirtless Zeigler ran after the teen, stopped to aim and fire his weapon, authorities said. With the safety still on, Zeigler then released it and fired a round off the ground, the paper reported.

Walker was not wounded.

Dana Zeigler and the teen's mother fought back tears as the security video was played for the jury. Jeffrey Zeigler was also visibly moved by his wife's demeanor.

Jeffrey Zeigler testified the gunshot was meant to be a warning shot but his foot slipped on the pavement, FOX 2 Detroit reported.

"I felt extremely remorseful and I was just shocked," he said, adding that he would have given Walker a ride to school if he could redo the incident differently.

In an interview with deputies, Zeigler allegedly said he was "tired of being a victim."

Authorities had been to his home in the past for reported break-ins. He also has a conviction for firing a handgun at another motorist during a dispute in 2004.

Zeigler’s attorney, Robert Morad, argued his client never chased Walker and only fired one shot. He contends the video shows a branch falling from a nearby tree, meaning the Zeigler fired in the air and not at Walker.

Prosecutor Kelly Collins rebutted that "being a bad shot does not negate one's intentions."

Morad also asked for a mistrial on the grounds that Pace referred to Walker as a "colored kid" and "colored boy."

A transcript of Zeigler’s interview with a sheriff’s deputy, however, appears to contradict the claim. According to the transcript, it was Zeigler who saisd he grabbed his shotgun after seeing "that colored kid" at his front door.

The judge said she would permit the attorneys to write a statement on how often the descriptor was made and that she would personally read them to the jury.