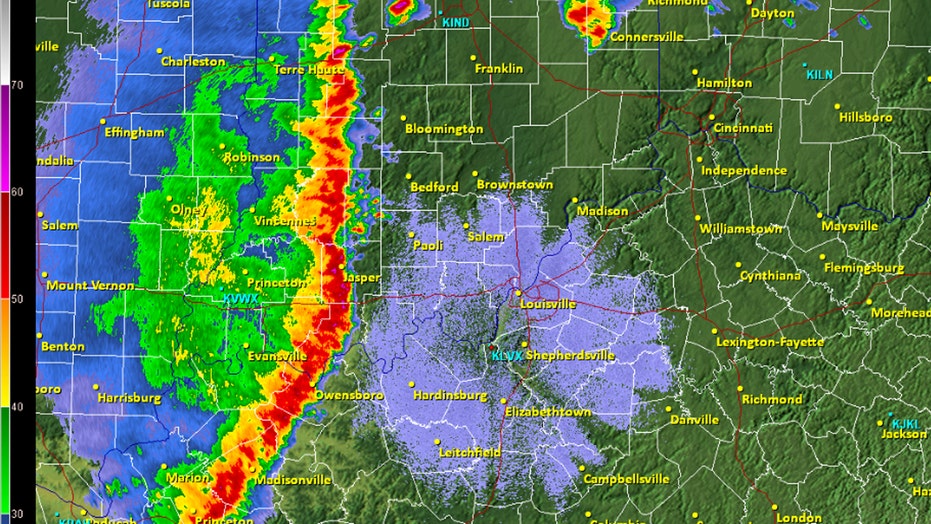 When severe thunderstorms are in the forecast, meteorologists typically talk about the development of a "squall line."

The National Oceanic and Atmospheric Administration's (NOAA) National Severe Storms Laboratory (NSSL) defines a squall line as a group of thunderstorms arranged in a line, often accompanied by a group of "squalls" of high wind, heavy rain and possible hail.

"Squall lines tend to pass quickly and are less prone to produce tornadoes than are supercells," the NSSL notes.

A squall line can be hundreds of miles long but are typically only 10 or 20 miles wide. (NOAA)

According to the National Weather Service (NWS) office in Louisville, Ky., squall lines are common across the U.S. east of the Rockies, especially during the spring.

When squall lines develop, a feature known as a "bow-echo" appears as the line of storms "bows out."

"A strongly bowed echo may indicate high winds in the middle of the line, where the storms are moving forward most quickly," according to the NSSL. "Brief tornadoes may occur on the leading edge of a bow echo."

Bow echoes, which are most common in the spring and summer, are associated with straight-line wind damage that comes with thunderstorms.

The NWS said bow echo-induced winds and downbursts account for a "large majority of the structural damage" from thunderstorms not associated with a tornado.

The most extreme example of a squall line is what is known as a derecho, which is a widespread, long-lived wind storm that is associated with a band of rapidly moving showers or thunderstorms.

A derecho is different in that it needs to meet certain criteria, which include wind damage swath extending more than 240 miles and wind gusts of at least 58 mph or greater along most of its length.