Waukesha Christmas parade suspect Darrell Brooks Jr. was in Wisconsin court Friday morning for a preliminary hearing related to the November tragedy, when a judge ruled that the case would go to trial after finding probable cause against the career criminal in connection with the horrific case.

Brooks, 39, wore a red-orange jail-issued jumpsuit and his hair up as he sat with his attorneys and stared straight ahead with his hands in his lap. He is accused of driving his SUV through a crowd of revelers, killing six people – including a child – and hurting dozens more during the evening holiday festivities.

"Mr. Brooks indicated to one of the detectives that, ‘I didn’t mean to kill nobody.’"

During Friday’s hearing, the prosecution called to the stand Waukesha Police Det. Thomas Casey testified under questioning from both sides about the events of Nov. 21. Court Commissioner Kevin M. Costello ultimately determined there was "ample" evidence and that the case would head to trial, and set an arraignment date for the morning of Feb. 11.

Before the detective testified, Costello read aloud the dozens of new charges against Brooks and brief details about each victim, all of whom who were identified using letters of the alphabet in lieu of their names. Brooks was slouched and remained emotionless as Costello spent several moments discussing the new charges and the victims one-by-one.

Casey, who ultimately became the lead investigator in the case, was the prosecution’s first and only witness of the day and said he has 24 years with the police force. He described how he was in a "traffic-control position" for the parade. He said he was one of many officers tasked with keeping car traffic out of the area at the time, and barricades were also placed consistently around the parade route.

About 100 groups were participating in the Christmas parade, he said, adding that he estimated thousands of spectators were in attendance.

The parade began at 4 p.m. local time and the parade route was closed off around 3:15 p.m. Under questioning from Waukesha District Attorney Susan Opper, Casey said around 4:35pm on Nov. 21, 2021, he heard on the police radio that officers had received a report of a "fights that involved somebody with a knife" in the nearby area of Frame Park.

Casey remained at his post, but soon saw a red Ford Escape in the parade route and heard a horn beeping that appeared to be coming from the vehicle.

"I started walking toward the center of the road when I heard the horn," he went on. When he saw the SUV, he stepped in front of it, put his hands up, and yelled for it to stop, he recalled.

Casey identified Brooks as being the driver whom he saw, while Brooks remained stoic.

The detective continued to describe the events, as the vehicle drove westbound on Main Street and into the flow of parade goers. He said he heard the vehicle’s horn beeping as it appeared to pick up speed.

Video footage shows the vehicle beeping its horn and changing speeds as it drives along the route. "It begins to do a zigzagging motion through the crowd," Casey continued.

When an officer shot at Brooks’ vehicle – and struck it three times – Brooks continued driving, Casey said. Casey said investigators determined that the vehicle was not defective.

Assistant State Public Defender Anna Kees pointed to the barricades and police vehicles blocking the cross streets along the parade route as a reason why her client was unable to drive out of the area.

Casey contended that people were loitering around the cross streets and in the areas of the barricades.

Kees questioned Casey about the driver’s appearance, and what the detective saw of the driver. Casey noted that he was focused on the driver’s face.

Casey said: "I personally did not see that … I was just zeroed in on his face. That’s all that I was looking at."

Police officers close a street in downtown Waukesha the morning after a car plowed through a holiday parade in Waukesha, Wisconsin, U.S., November 22, 2021.

Kees also pointed to Brooks’ marijuana use and police officers’ reports that he smelled like marijuana, had bloodshot, glassy eyes, to which Casey agreed.

When officers tried to interrogate Brooks and show him images of the incident, "he did not want to look at them," Kees said. Casey agreed.

"In fact, he would put his head down … he would turn his head away from the photos and the videos … and at one point he even begged the law enforcement officer to stop showing them to him, correct?" Kees asked.

She added: "Mr. Brooks indicated to one of the detectives that, ‘I didn’t mean to kill nobody.’"

Casey, who was not present for the interrogation but was familiar, said he believed that was what Brooks had said.

The defense did not call any witnesses to testify on Friday.

Brooks has remained behind bars at the Waukesha County Jail since he was ordered held on $5 million bail on Nov. 23, two days after the horror. He was originally charged with five counts of first-degree intentional homicide. A sixth count was added later. The half-dozen charges – each of which carries a life sentence if convicted – represents the six people who killed.

Brooks's ex-girlfriend told police after the tragedy that he had been fighting with her minutes before the parade horror and that he gave her a black eye and a split lip, hitting her while they were in the car together. He was allegedly driving erratically and with one hand. She said they met up around 4 p.m. in the area of Frame Park, and he had been angry with her for talking to other men.

At the time, he was out on bail for allegedly punching the same woman in the face and running her down with the same vehicle on Nov. 2. 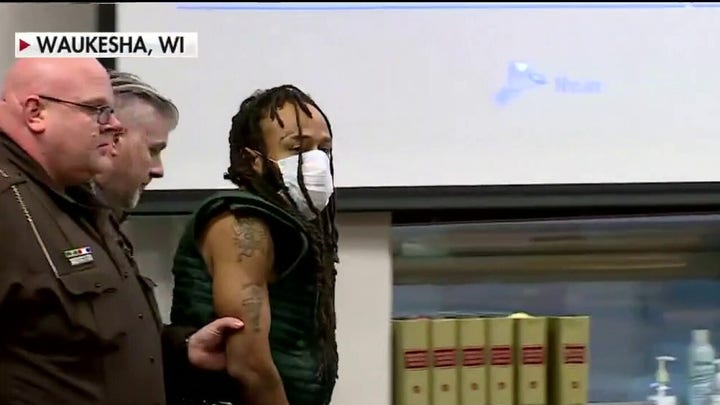 Just Wednesday, Brooks was hit with a whopping 71 additional charges. New charges against him include first-degree recklessly endangering safety with the use of a dangerous weapon; hit-and-run resulting in death; felony bail jumping; and misdemeanor domestic abuse.

Friday was the first time he’d been seen or heard from since Dec. 1, when he told Fox News Digital he felt "dehumanized," and like he was being "demonized."

This is a developing news story. Please check back for updates.