RICHMOND, Va. – Virginia Gov. Ralph Northam announced Thursday the removal of one of the country's most iconic monuments to the Confederacy — a statue of Gen. Robert E. Lee along Richmond's bucolic tree-lined Monument Avenue.

Northam said Virginia had set "high ideals" in the past 400 years about freedom and equality but had "fallen short" of them.

Taking down the Lee monument is an extraordinary victory for civil rights activists who have long called for its removal. Several efforts in the past to remove the statue have been fought bitterly and failed.

Ahead of the governor's announcement, hundreds gathered around the Lee monument.

Lee's statue will be sent to a storage facility.

"That is a symbol for so many people, black and otherwise, of a time gone by of hate and oppression and being made to feel less than," said Del. Jay Jones, a black lawmaker from Norfolk. Jones said he was "overcome" by emotion when he learned Lee's statue was coming down.

Richmond's Mayor Levar Stoney, who spoke before the governor, said he plans to seek the removal of all of the other Confederate statues along Monument Avenue, which include  Confederate President Jefferson Davis and Confederate Gens. Stonewall Jackson and J.E.B. Stuart. Those statues sit on city land, unlike the Lee statue, which is on state property.

"Richmond is no longer the capital of the Confederacy," Stoney said.  "We have two pandemics in this country — COVID-19 and racism. One is six months old, the other, 400 years old. As the events of the last month, the last two weeks have made clear, both are lethal, especially for black and brown."

He added, "This is our moral duty. We know better and now that we know better, it's time to do better."

In 1996, Richmond decided to integrate its most famous street by putting a statue of black tennis champion Arthur Ashe, who was a Richmond native. That statue will remain.

This Tuesday, June 2, 2020 file photo shows a part of a large group of protesters gather around the statue of Confederate General Robert E. Lee on Monument Avenue near downtown in Richmond, Va. (AP Photo/Steve Helber, File)

Stoney hasn't said where he thinks the city monuments should go but an outgoing mayor in the tiny town of Crewe, in consultation with his successor, sent a letter to Northam offering to take the Lee statue off his hands, the Richmond Times-Dispatch reported.

Col. Greg Eanes believes having Confederate generals could bring in tourism dollars to pay for his town's badly needed infrastructure upgrades and to keep Crewe from needing to raise taxes on its residents who have been struggling to pay them.

He's also open to taking Jefferson Davis, too; anything that could bring in the bucks.

"Green is the most important color," said Eanes, 61, a retired service member who joined the Air Force after 9/11 and ultimately returned to his hometown of Crewe, a 2-square-mile slice of Nottoway County about an hour southwest of Richmond. "If I could get a statue of Lenin or Josef Stalin, I would take it." 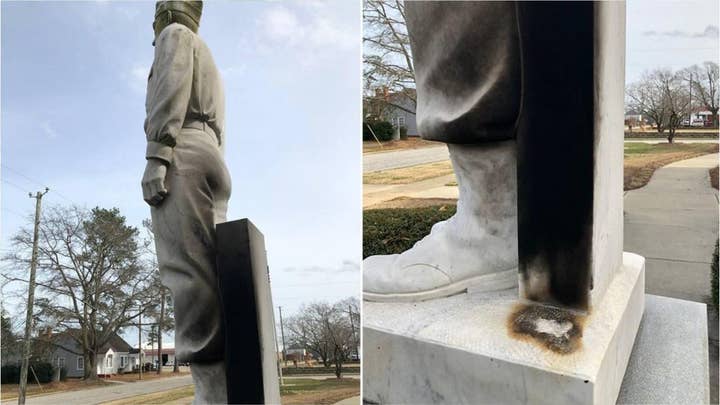 Monuments along the avenue have been rallying points during protests in recent days over Floyd’s death, and they have been tagged with graffiti, including messages saying “end police brutality” and “stop white supremacy.”

Other tragedies in recent years have prompted similar nationwide soul-searching over Confederate monuments, which some people regard as inappropriate tributes to the South’s slave-holding past.

This Tuesday, June 2, 2020 file photo shows a large group of protesters gather around the statue of Confederate General Robert E. Lee on Monument Avenue near downtown in Richmond, Va. (AP)

"I am by no means a racist but I see the significance of keeping the statues," Lori Howzer told Fox News. "You can't erase history because you don't like it. You learn from it and these statues are a learning tool for parents and teachers."

Still others in the crowd told Fox News that they thought Northam's comments about ending racism were a little tone deaf.

Northam made headlines last year after a picture of him in blackface surfaced, leading state and national leaders to call on him to resign. He didn't. After first apologizing for the photo, Northam did a 180 and claimed it wasn't him in the picture.

"It's a little funny to see him up there talking about how we need to be aware of 'our past' while glossing over his," Daniel Blouson told Fox News.

CONFEDERATE MONUMENTS: THIS 124-YEAR-OLD WOMEN'S GROUP IS FIGHTING TO KEEP THEM AROUND

Confederate memorials began coming down after a white supremacist killed nine black people at a Bible study in a church in South Carolina in 2015 and then again after a violent rally of white supremacists in Charlottesville in 2017.

Bill Gallasch, president of the Monument Avenue Preservation Society, said he worried the statues’ removal would change the “soul” of the street, hurt tourism in historic Richmond and stir up violence between far-right and far-left groups.

The monument removal plans have also drawn criticism from the Virginia division of the Sons of Confederate Veterans.

But Joseph Rogers, a descendant of enslaved people and an organizer with the Virginia Defenders for Freedom, Justice & Equality, said he felt like the voices of black people are finally being heard. Rogers spoke from the vicinity of the Lee Monument, where another rally was taking place late Wednesday afternoon and where he described one wave of cheering after another.