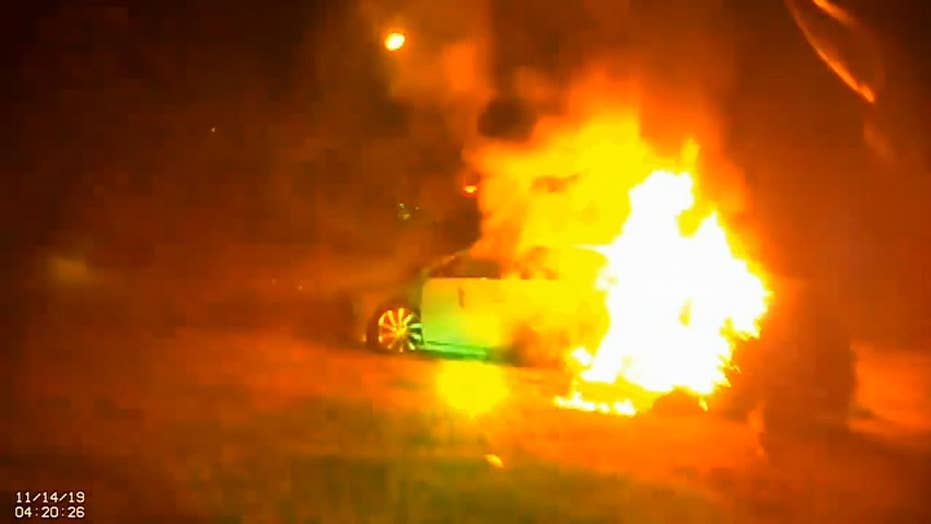 Two police officers in Virginia were hailed as heroes after body camera footage captured the pair charging toward a burning car in a race to rescue an unconscious woman from the growing flames.

Officers Dalton Foley and Olivia Martin of the Farmville Police Department responded to a report of a single-car crash around 4 a.m. on Friday. When they arrived, the fire had already engulfed the rear of the car.

Foley’s body camera showed the partners running to check whether anyone was still inside the vehicle. They found an unconscious 57-year-old woman in the driver’s seat.

We’ll both be honest, we had a lot of fear.

As smoke billowed out from the open door, Foley used a knife to cut the woman’s seatbelt and dragged her out of the car just in time.

"As soon as we pulled her out, and you can see on the bodycam footage, we’re about four or five feet away from the vehicle dragging her, and the cab of the vehicle had just caught on fire,” Martin told WWBT-TV.

Foley and Martin frantically dragged the woman further away from the car before it could explode. They asked the woman whether anyone else was in the vehicle, but she couldn’t respond.

The officers determined no passengers were inside the vehicle before bringing the woman to a safer distance. The body camera showed Foley looking back at the car before remarking: “It’s fully engulfed.”

“We’ll both be honest, we had a lot of fear,” Foley told WRIC-TV. “We’ve never dealt with anything like that, so kind of in the back of your head, you’re scared, but you kind of have to put it down and have to go to work.”

The unnamed woman was airlifted to a hospital in a serious but stable condition, the station reported. An update on her condition wasn’t immediately available.