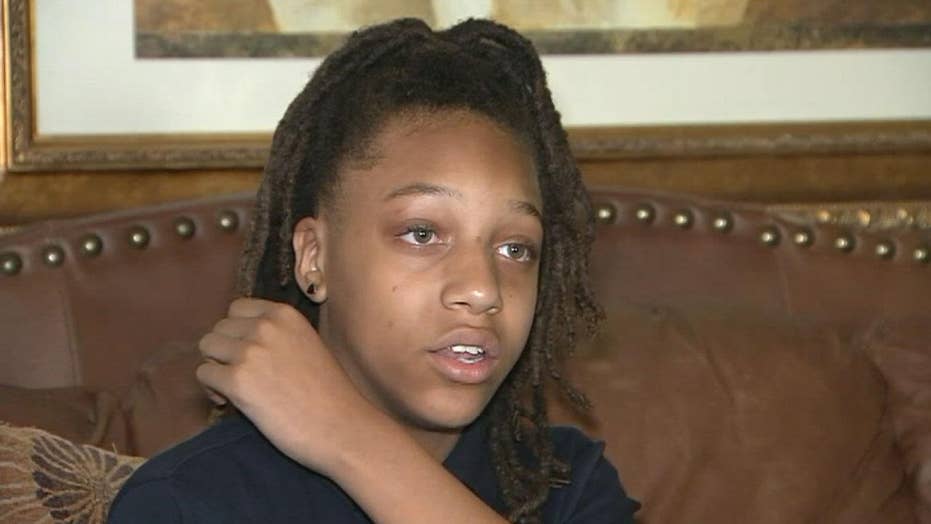 School says Virginia girl’s story about classmates ambushing her, cutting her hair was a hoax

Raw video: A 12-year-old girl’s claim that she’d been held down by three classmates who cut her dreadlocks was a hoax, according to school officials.

A Virginia sixth grader who claimed three of her white male classmates held her down and cut off her dreadlocks is now saying she made up the entire story.

Amari Allen, an African-American 12-year-old who attends Immanuel Christian School in Springfield — a private school where second lady Karen Pence teaches art — reported the alleged incident last week. She told several media outlets that three boys at school pinned her down and cut off her hair, and local police opened an investigation.

"They said my hair was nappy and I was ugly," she told WRC-TV. "They put their hands over my mouth. They put my hands behind my back. And they started cutting my hair and saying it was ugly."

The girl's grandmother said she was doing Amari's hair one day when she realized portions of her dreadlocks were missing, which is when the girl told the story.

"It was like she just died. That's how painful it was for me," the girl's grandmother, said after the girl made the allegations.

Her grandfather said his "heart just broke" and that he "was just paralyzed."

The family of Amari Allen, 12, walked back the girl's claims that she was pinned down by three white classmates who then cut her dreadlocks off. (WTTG)

But on Monday, her family released a statement saying the accusations made by the 12-year-old girl had been fabricated.

“To those young boys and their parents, we sincerely apologize for the pain and anxiety these allegations have caused,” said a statement from the girl's grandparents obtained by The Washington Post. “To the administrators and families of Immanuel Christian School, we are sorry for the damage this incident has done to trust within the school family and the undue scorn it has brought to the school. To the broader community, who rallied in such passionate support for our daughter, we apologize for betraying your trust.”

Immanuel Christian Academy in Springfield, Va., said in a statement Monday that they are "relieved to hear the truth" about the girl's allegations. (Google Earth)

The family added they "understand there will be consequences and we’re prepared to take responsibility for them. We know that it will take time to heal, and we hope and pray that the boys, their families, the school and the broader community will be able to forgive us in time.”

The school generated a statement that said, "We can now confirm that the student who accused three of her classmates of assault has acknowledged that the allegations were false."

"We’re grateful to the Fairfax County Police Department for their diligent work to investigate these allegations,” wrote Stephen E. Danish, the head of the school. “While we are relieved to hear the truth and bring the events of the past few days to a close, we also feel tremendous pain for the victims and the hurt on both sides of this conflict. We recognize that we now enter what will be a long season of healing.”

The 12-year-old, WRC reported, is a straight-A student and violin player who has attended the private Christian school since kindergarten.