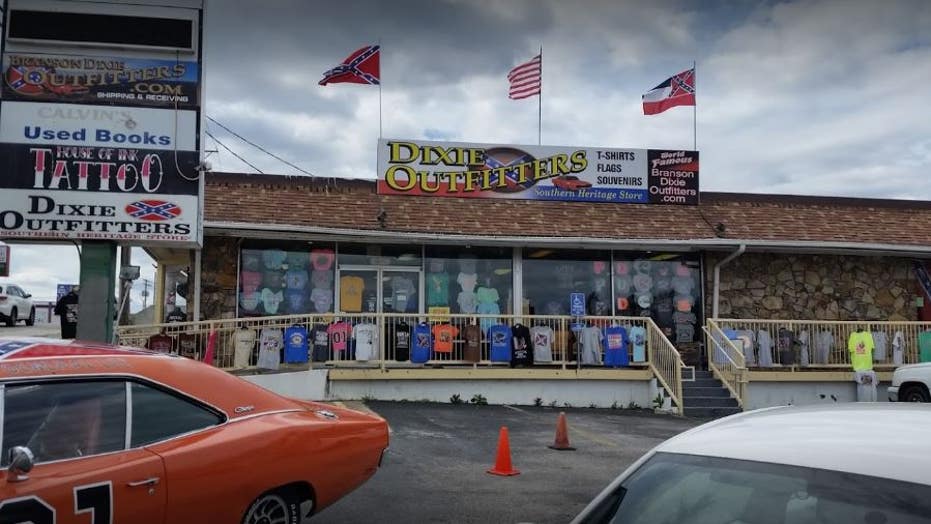 A viral video of a Black Lives Matter demonstration outside a Confederate-themed store in Branson, Mo., shows a woman holding a Confederate flag while appearing to berate protesters and proclaim her support for the Ku Klux Klan.

Some 65 BLM supporters had assembled outside a Dixie Outfitters to protest the store, the Springfield News-Leader reported. About 50 counter-protesters were there to show their support for the store and the Confederate flag, according to the paper.

In the viral video, a woman can be seen sitting on the tailgate of a truck in the parking lot of the store while BLM protesters can be heard off-camera. Other people draped in the Confederate flag can be seen in the background, while a police officer stands by.

At one point, the woman stands up holding the Confederate flag and tells the protesters: “I will teach my grandkids to hate you all.”

She tells the protesters, “suck on this,” as she turns around and shrouds herself with the flag. She then appears to turn around, hold a fist in the area and shout: “KKK belief.”

Heated exchanges continued between the two groups as Branson police officers stood between them, the News-Leader reported. The demonstrations ended without incident around 7:30 p.m.

As of Tuesday, the video has been shared nearly 23,000 times, and shared by high-profile celebrities like rapper Ice T.

The demonstration comes amid a nationwide push to take down Confederate monuments in the wake of George Floyd’s death in the custody of a white Minneapolis police officer.