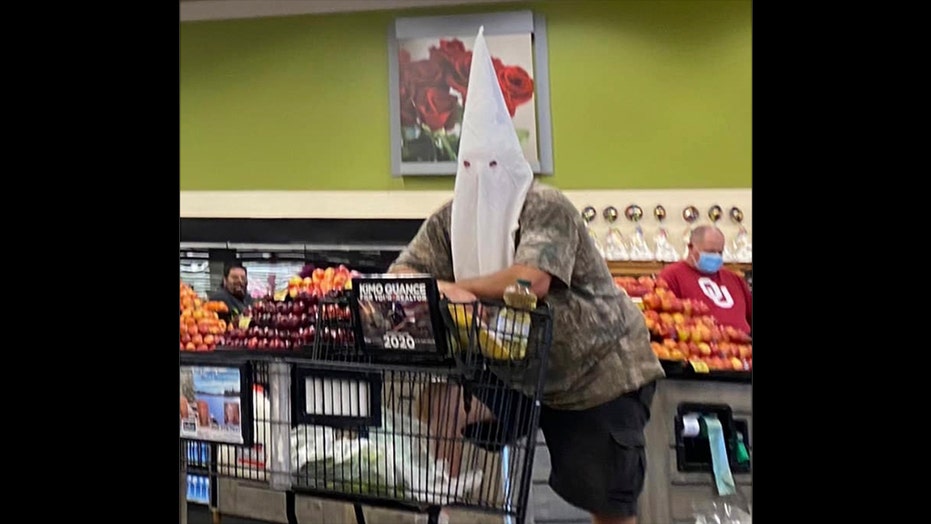 A man was photographed wearing what appeared to be a Ku Klux Klan hood while grocery shopping in southern California over the weekend, inciting outrage from other shoppers, local officials, and the Anti-Defamation League.

The incident Saturday occurred a day after San Diego County began requiring all residents to wear masks or other face coverings in public, including when making trips to the grocery store, in an effort to reduce the spread of the coronavirus.

Several grocery clerks approached the man pushing a shopping cart inside the Vons supermarket in Santee, a suburban city of about 53,400 residents, to ask him to remove the hood or leave the store, a corporate spokesperson told the San Diego Tribune.

A man was spotted at a California supermarket wearing what appears to be a KKK hood. Courtesy Tiam Tellez

The store manager approached the man again while he was in the checkout line telling him to remove the head covering and leave. The unidentified man purchased the items in his cart and left, Melissa Hill, a spokeswoman for Vons, Albertsons and Pavilions stores in Southern California, told the newspaper.

“At Vons, fostering an environment of courtesy, dignity, and respect is one of our highest priorities, and we work hard to hold everyone in our stores to these standards, including customers,” Hill said. “This was a disturbing incident for our associates and customers, and we are reviewing with our team how to best handle such inappropriate situations in the future.”

"There was an incident in Santee on Saturday where citizens photographed a male wearing attire that depicted a symbol of hatred. The citizens and Vons employees took steps to address the situation,” Santee Mayor John Minto said in a statement published on the city’s website Sunday evening.

“Many thanks to all who stepped forward to curtail this sad reminder of intolerance. Santee, its leaders, and I will not tolerate such behavior. Santee and its citizens are great, and this particular individual's actions are not representative of us as a people and a wonderful city."

Several photos shared on social media showed a man wearing what appeared to by a white KKK hood over his face and head while pushing a shopping cart in the store’s produce section. At least one photo showed he had removed the hood, exposing his face at one point.

“UPDATE: So I want to say Thank you to the management team. Several employees came over together and told the man to either remove the hood or he would have to leave, so he removed the hood,” Tiam Tellez, who snapped photos of the shopper, said on Facebook. “So troublesome in so many ways this is still happening in Santee at Vons. Disgusting!”

A man was spotted at a California supermarket wearing what appears to be a KKK hood. Courtesy Tiam Tellez

“The images I’ve seen are abhorrent. This blatant racism has no place in Santee or any part of San Diego County. It is not who we are. It is not what we stand for and can’t be tolerated,” she tweeted Sunday.

Tammy Gillies, regional director of the Anti-Defamation League in the San Diego area, posted on Twitter Monday to thank Minto, Jacob, and Vons for “your strong response to this act of hate.”

“San Diego is #NoPlaceForHate,” she had first tweeted Sunday, bringing attention to the incident. In her follow-up tweet she wrote: “One year after the tragic synagogue shooting in @Poway, we must ALL continue to stand up together against hate in our community and in our world.”

Just over a year ago on April 27, 2019, a 19-year-old gunman opened fire inside a synagogue in Poway, another San Diego County town, as worshipers prepared to celebrate Shabbat and the last day of Passover, killing a woman and injuring three others, including a rabbi.

An off-duty Border Patrol agent returned fire but missed the gunman, who fled when his assault-style rifle jammed, effectively preventing more casualties in the synagogue packed with hundreds of congregants.