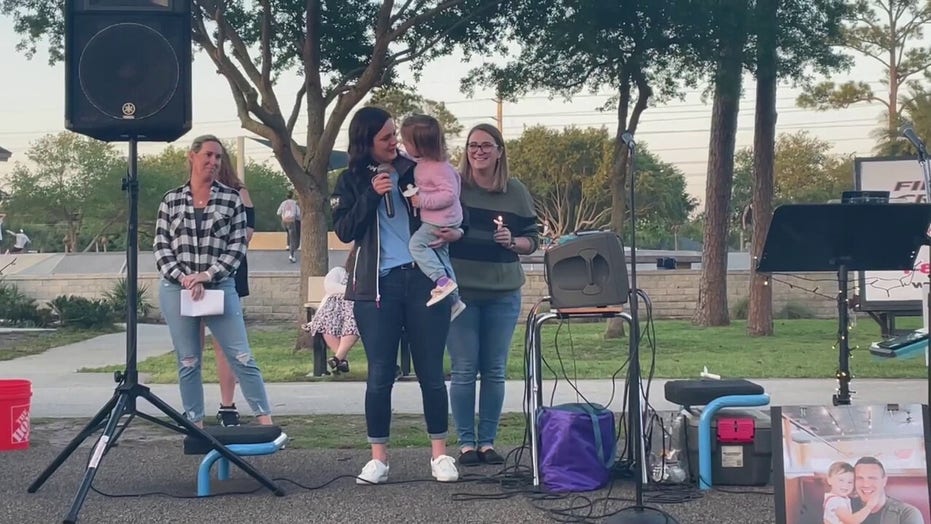 The shattered widow of a young Microsoft executive gunned down in front of their toddler daughter in north Florida demanded justice Tuesday night at a candlelight vigil to honor his memory.

"We will find them and they will be held accountable," Kirsten Bridegan said of the people responsible for murdering Jared Bridegan, 33.

"This community is strong, we are strong and God is the strongest of all, and he will not stand by," she said.

Kristen, 30, wept as she spoke to a crowd of about 100 people holding white candles at Sunshine Playground in South Beach Park — not far from where the father of four was fatally shot in front of their 2-year-old Bexley.

Kirsten Bridegan and her daughter Bexley at a vigil April 19 for her slain husband. (Fox News Digital)

Jared had just dropped off his 9-year-old twins from a prior marriage at their mother’s house in Jacksonville Beach and was headed home with Bexley Feb. 16 when he encountered a tire near Sanctuary Way and Jacksonville Drive.

When he stepped out of his car a little after 7:30 p.m., he was shot. The suspect fled, leaving the terrified child alone, strapped in her car seat for three minutes until a Good Samaritan came upon the scene and pulled her out. Kirsten was at home with the couple’s infant, London.

The Jacksonville Beach Police Department hasn’t publicly identified a person of interest in the case. They have released photos of a dark blue F-150 and asked the public to help track it down.

The mysterious murder of the young father in the upscale suburb has shaken the community and forever changed his family. Jared, the youngest of four siblings, grew up in Jacksonville and was working at Microsoft as a manager of user experience.

Jared’s brother Adam Bridegan said the last conversation they had was about baptizing his eldest daughter.

Kristen and Jared Bridegan with their 7-month-old London. (Courtesy of Kirsten Bridegan)

"It brings me a lot of peace knowing that," Adam told Fox News Digital. "He was really, really excited for that."

Adam and his wife married Feb. 16— the same date that Jared was shot to death.

The couple had just returned to their home in Salt Lake City, Utah, after celebrating their wedding anniversary at a French restaurant when Kirsten called.

"It’s a night that we will never forget," he said, as his eyes brimmed with tears.

The oldest of the siblings, Justin Bridegan, wore a T-shirt emblazoned with his slain brother’s picture. He said he and Jared were born on the same day nine years apart.

His sister called him the night it happened. "I fell to my knees in tears. How do you prepare for a moment like that?" he asked.

Among the crowd were detectives and police officers. Sgt. David Young said he was there to show his support and also gather clues.

Jared’s ex-wife and twins were not at the vigil. The twins also did not attend his funeral.

Jared Bridegan baking brownies with his daughter Bexley. He built the wood stool she sits on so she could help him in the kitchen, Kirsten said. (Courtesy fo Kirsten Bridegan)

"I know that prayers are answered and I have offered so many, and I have felt your prayers as well," Kirsten told the crowd.

Anyone with information should contact the Jacksonville Beach Police Department at 904-270-1661 or First Coast Crime Stoppers at 1-866-845-TIPS. A GoFundMe.com account has been set up for the Bridegan family.