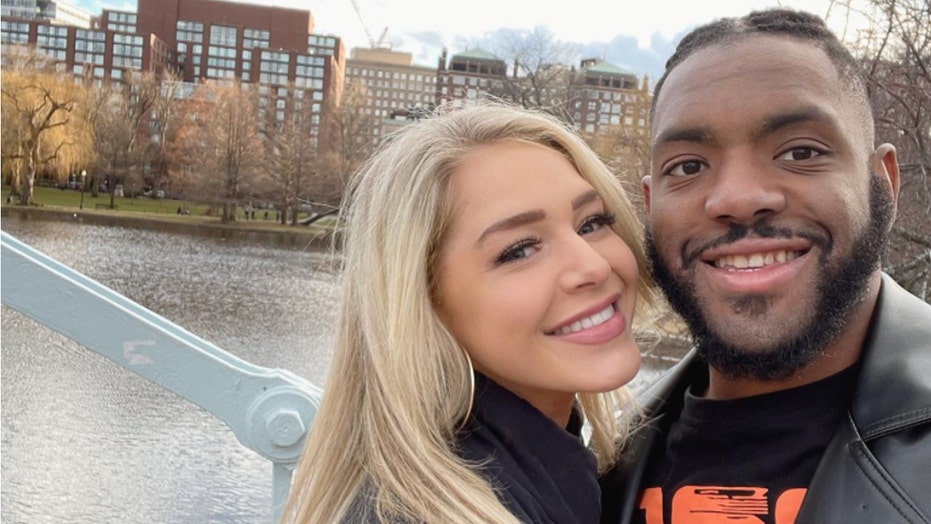 Florida police say a 27-year-old Miami man died of a knife wound to the chest Sunday — as video shows his Instagram model girlfriend was spotted soaked in blood, wearing handcuffs and being questioned by investigators.

But so far, there have been no charges.

Christian Tobechukwu Obumseli suffered "an apparent knife wound" in a domestic violence incident before first responders rushed him 2.5 miles away to the Ryder Trauma Center at Jackson Memorial Hospital, Miami police said in a statement. He was pronounced dead at the hospital.

A lawyer for his girlfriend, Courtney Clenney, said she was defending herself.

Video showing the aftermath of the altercation obtained by TMZ appears to show a distraught, blood-covered woman in handcuffs sitting on a balcony, speaking with police. The front of her white sweatpants is stained red, as are her arms, chest, stomach and forehead.

Authorities said they had interviewed a woman who was involved in "a physical altercation" with Obumseli and that homicide detectives were investigating. A law enforcement source told Fox News Digital that Clenney was taken to a hospital under the Baker Act for a mental evaluation.

"The Clenney family is devastated by the events leading up to the death of Christian and send their deepest sympathies to his family, friends, and loved ones," said Frank Prieto, Clenney’s attorney. "Clearly, none of this was intended and Courtney is struggling mentally with the aftermath of what occurred that evening."

The Miami-based WPLG 10 reported Friday that friends of the couple described "a very rocky relationship" — although the sources gave conflicting stories about who might have been the aggressor.

Prieto said that 1 in 4 U.S. women are victims of domestic violence, as well as 1 in 9 men.

"As Courtney struggles with the pain of being a survivor of domestic violence and the aftermath of the events that evening, we ask that the community and Christian’s family allow the police and the state to conduct their independent investigation of the events," he said. "This is a tragedy for all involved but it was not criminal conduct; Courtney was defending herself and the investigation will reveal exactly that."

The couple reportedly broke up last month, according to the Miami Herald, and Obumseli allegedly began sleeping in the building’s common areas.

Clenney uses the name Courtney Tailor on Instagram and OnlyFans, where she boasts more than 2 million followers.

Obumseli would have turned 28 next week, according to a GoFundMe fundraiser set up by his brother.

"He did not deserve for his life to be cut short by a heinous act of violence," the brother, Jeffrey Obumseli, wrote.