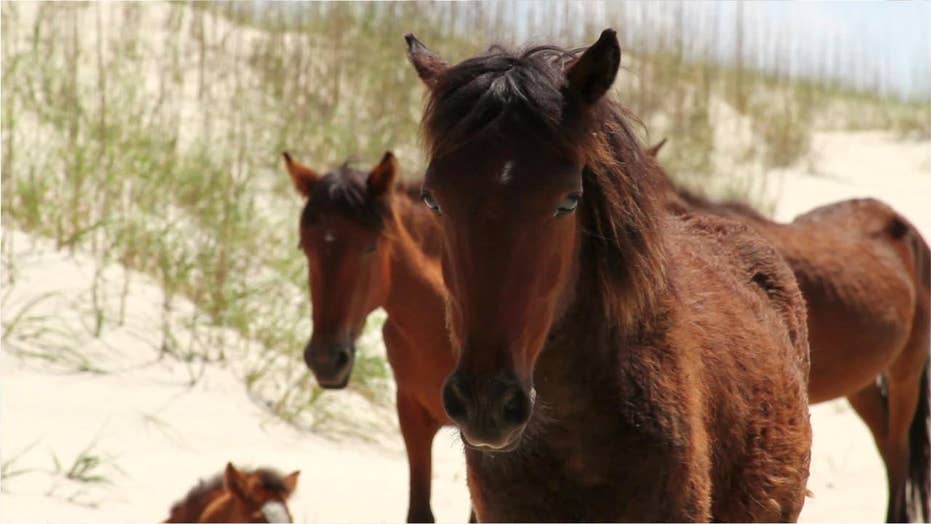 If the recent stretch of record-warm temperatures in the East has you confused about what month it is, you're not alone.

A group devoted to protecting and managing herds of wild horses in North Carolina posted a warning to drivers over the weekend explaining that the animals have been taking advantage of mild weather and sleeping on the sand at night.

"It’s warm tonight and the horses are out on the beach," Corolla Wild Horse Fund wrote on Facebook. "Please be careful!"

The herd of horses roaming the northern beaches of Currituck County has lived through hurricanes, nor'easters and other punishing encounters with Mother Nature -- and remain relatively unscathed in 500 years on the barrier island.

But temperatures in the 60s and 70s across the Carolinas have coaxed the animals out of the islands' forests, where they usually stay during winter, and into the paths of beach drivers. On Sunday, a record high of 72 degrees was recorded at Cape Hatteras for the third consecutive day, according to the National Weather Service.

Forecasters said the mild conditions are expected to remain over the next few days, with near-record temperatures by midweek,

Daniel T. Myers III was driving near Cordova Beach when he spotted the horses in the dark and shared a photo of Facebook. He told The News & Observer that the animals are very hard to see.

“This time of year, it is rare," he told the paper. "They’re out there enjoying the beach like everyone, but sleeping.”

The Corolla Wild Horse Fund said it is not typical for midwinter.

"We don’t normally expect to see horses on the beach this time of year, but the unseasonably warm weather has them acting more like it’s June, not January," the group said late Sunday.

Vehicle accidents are one of the leading causes of death among the Outer Banks herds, according to The News & Observer. Last summer, one wild horse was killed and another was injured in two separate crashes.

A group of wild horses on North Carolina’s Outer Banks has a lineage believed to trace back to 16th-century Spanish explorations. (iStock)

Four-wheel drive vehicles routinely are allowed on the Corolla beaches, which are also home to about 100 wild horses. Their lineage is believed to trace back to 16th-century Spanish explorations.

While the horses have managed to make it through storms by huddling together with their "butts to the wind" as a stabilizing technique, there have been some weather-related tragedies. Last year, Hurricane Dorian generated a "mini tsunami” that dragged 28 wild horses to their deaths.