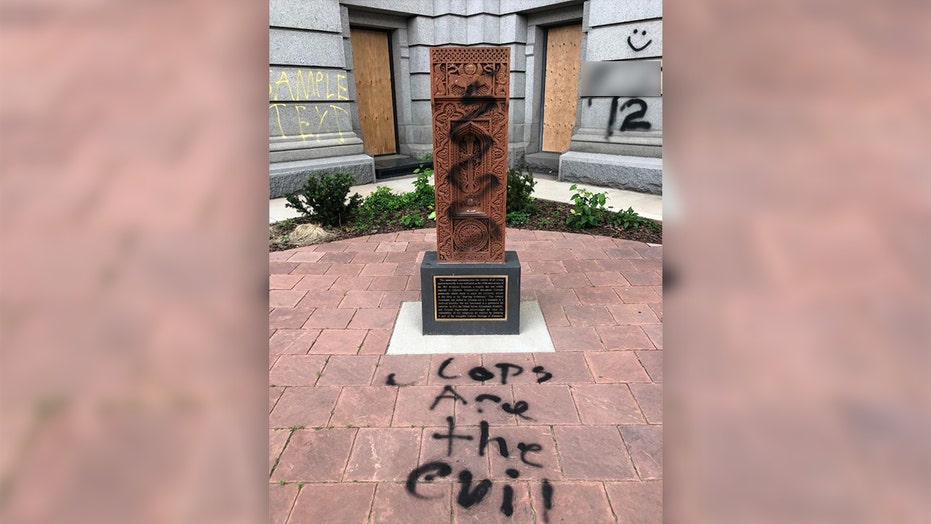 Vandals have damaged historic monuments around the country amid protests over the death of George Floyd in police custody.

The targets of rage have included the Lincoln Memorial, the World War II Memorial and the statue of Gen. Casimir Pulaski on the National Mall in Washington.

“Y’all Not Tired Yet?” a vandal scrawled on a wall in front of the Lincoln Memorial.

In Boston, the Robert Gould Shaw and the 54th Regiment Memorial was one of 16 public artworks damaged when thousands of protesters swarmed Boston Common May 31, according to public radio station WBUR-FM,

The sculpture honors African-American soldiers who fought in the Civil War.

“This monument is considered one of the nation's greatest pieces of public art and the greatest piece to come out of the Civil War,” Friends of the Public Garden executive director Liz Vizza told the station. “It was, amazingly enough, dedicated 123 years ago on May 31st – the day it was defaced.”

Vandals damaged the Lincoln Memorial, the World War II Memorial and the statue of General Casimir Pulaski on the National Mall in Washington amid George Floyd protests. (National Park Service)

In Duluth, Minn., one of the city most treasured memorials, the Clayton Jackson McGhie Memorial, was vandalized with anti-police graffiti during protests last weekend.

The memorial commemorates three black men wrongly lynched years ago after being accused of raping a woman, Fox 21 Duluth reported.

“I was hurt. I was hurt that we have to see that,” Stephan Witherspoon, co-chair of the Memorial board and president of the local NAACP, told the station.

In Denver, the Colorado Soldiers Monument honoring the state’s past military leaders was defaced with graffiti during a protest that became violent when protesters clashed with cops, according to Denverite.com.

Sculpture remembering the victims of the Armenian Genocide was vandalized during protests in Denver. (Armenians of Colorado)

Near that monument, a sculpture remembering victims of the Armenian genocide was also vandalized.

“Cops are the evil,” was scrawled on the ground in front of the memorial.

“Since the Khachkar commemorates the victims of all crimes against humanity, including slavery and state-sponsored racism, it is ironic that individuals who claim to seek justice have vandalized the very monument that honors the victims of injustice,” Armenians of Colorado said in a statement.

In Salt Lake City, protesters damaged the Serve and Protect bronze sculpture in front of the city’s Public Safety Building with red paint.

The sculpture is meant to symbolize the duty emergency responders have to protect and serve their communities, the Salt Lake Tribune reported.

The paper reported that vandals scrawled graffiti that said “Enough is enough!” and “F--- the police” on the glass of the Public Safety Building.

In Cleveland, the Soldiers & Sailors monument in the city’s downtown was vandalized with graffiti when a protest turned into a riot May 30.

Vandals also stole the monument’s American flag, according to WOIO-TV.

Tim Daley, the monument commission’s executive director, choked up as he talked about the damages. A descendent of his is on the monument.

“For the disregard of it is very personal to me we will get through this the crucible of the American Civil war was the crucible that allowed us to develop our identity as American," he said.

The memorial is dedicated to members of law enforcement killed in the line of duty.

One statue’s face was spray painted black, while another structure had the words “F— the police” spray-painted on it, the station reported.

In Birmingham, Ala., a 97-year-old memorial honoring those who lost their lives in World War I was defaced and damaged amid a protest in the public park where it was located.

Protesters had initially turned their wrath on the park’s Confederate monument, according to WVTM-TV.

Protesters tried to tear it down but were unable to, the station reported.

City officials then removed both monuments but plan to return only the World War I monument to the park after undergoing repairs.

Dozens of other Confederate statues and memorials in Southern cities have also been damaged amid the protests sparked by the death of Floyd, a black man who was pinned to the ground by a white police officer.

City officials have stepped in to remove other Confederate monuments.

LONDON STATUE OF WINSTON CHURCHILL VANDALIZED ON D-DAY AMID PROTESTS

The protests erupted after video shot by a bystander captured Minneapolis officer Derek Chavin kneeling on Floyd’s neck for more than eight minutes while ignoring Floyd’s pleas that he couldn’t breathe.

Another statue that was damaged during protests threatened to become a minor diplomatic incident, ArtNet reported last week.

After the statue in Washington, D.C., commemorating Polish Revolutionary War hero Thaddeus Kosciuszko was vandalized. Polish Ambassador Piotr Wilczek went on Twitter to say he was “disgusted and appalled” over what happened.

“I implore @WhiteHouse & @NatlParkService to quickly restore the statue to its original state,” he tweeted.