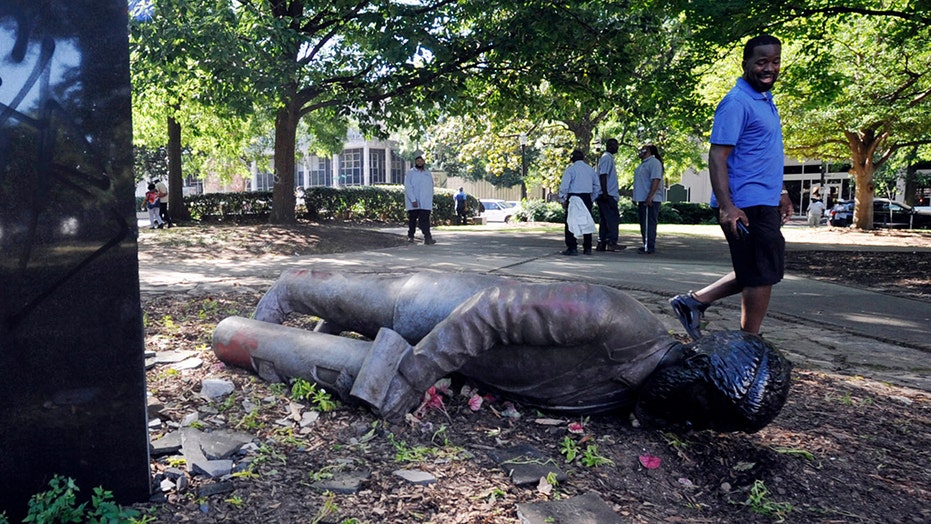 The mayor of Birmingham was slapped with a lawsuit from the state of Alabama Tuesday after starting to remove a Confederate monument already vandalized by crowds demanding justice for George Floyd.

Birmingham Mayor Randall Woodfin on Monday ordered the removal of the Confederate Soldiers and Sailors Monument in Linn Park. A large crane began to tear down the 52-foot-tall granite structure, which has been there for 115 years.

"It's important to note that the city of Birmingham wasn't even a city during the Civil War,” the mayor added. “We don't have time to worry about something that's not working for our city and relegates black people to property and slavery. It's important that we take this down and move forward."

Alabama Attorney General Steve Marshall announced Tuesday that he has filed a new lawsuit against the city for violating the Alabama Memorial Preservation Act.

Marshall said the city would face a $25,000 fine, which would go toward the Historic Preservation Fund.

An unidentified man walks past a toppled statue in Birmingham, Ala., on Monday, June 1, 2020, following a night of unrest. People shattered windows, set fires and damaged monuments in a downtown park after a protest against the death of George Floyd. Floyd died after being restrained by Minneapolis police officers on May 25. (AP Photo/Jay Reeves)

Amid turmoil across the nation over the death of Floyd, who died in police custody on May 25 after a Minneapolis officer pressed his knee into Floyd’s neck for several minutes, officials have ordered Confederate statues removed from public places in several cities. Most notably, Virginia Gov. Ralph Northam on Thursday announced the state will remove an iconic statue of Confederate Gen. Robert E. Lee from Richmond.

The mayor backtracked on an initial ban on protests on public property and instead implemented “restricted public protesting.” The city designated W.C. Patton Park for permitted demonstrations or vigils from 10 a.m. to 3 p.m. while a curfew is in effect.

"I understand the community’s concerns regarding the temporary restrictions placed on public protests. Trust me, I hear you,” Woodfin said. “Unfortunately, the tragic consequences of this week’s protests, occurring both on our streets and around the country, demonstrate a clear and present danger to the safety of our residents, including peaceful protesters."

On Sunday, some unsuccessfully tried to use a rope and chain attached to a pickup truck to topple the large granite monument, which was erected in 1905 by the United Daughters of the Confederacy. Crowds removed a plywood barricade covering the monument’s base, chipped away at the writing etched into the stone and further vandalized the monument with spray paint.

Protesters pulled down a bronze statue of Charles Linn, the park’s namesake who was a captain in the Confederate Navy and later one of the founders of Birmingham, covering in with graffiti. That statue was put in place in 2013 by a local organization honoring the Birmingham founder’s descendants.

Woodfin appeared at Linn Park and told the crowd over a megaphone to let him “finish the job” of removing the monument and to go home before sending officers in to make arrests.

Crowds then swept past the adjacent Jefferson County Courthouse, shattering several windows and damaging a statue of Thomas Jefferson, setting fire to its base, before wreaking further havoc in the city overnight. In a video statement that night, Woodfin said he supported peaceful protests and urged crowds to “stop destroying your own community.”