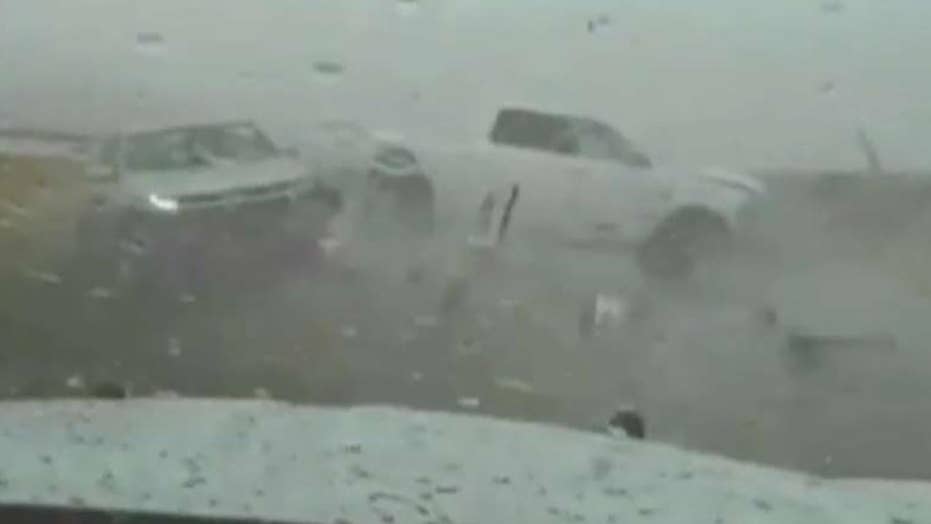 A highway patrol officer in Utah has been released from the hospital after surviving when a truck lost control and struck his car on the side of an interstate over the weekend.

Sgt. Brian Nelson was stopped on the side of the road to investigate his third crash of the day along the stretch of the interstate when a white Dodge pickup truck hydroplaned and hit his vehicle.

“If he would have been outside of his car, I think the damages and injuries would’ve been a lot worse,” UHP Cpl. Colton Freckleton told FOX13.

The highway patrol said a medical helicopter was preparing to pick up Nelson, who reported having "serious neck pain," but was canceled due to heavy rain.

Damage to Sgt. Brian Nelson's vehicle after it was struck by a truck that hydroplaned Saturday on Interstate 15 in Box Elder County. (Colonel Michael Rapich/Utah Highway Patrol)

Nelson was transported to an area hospital, where he was checked out and did not have any visible breaks. He was later treated and released and plans to follow up with his own doctor next week after resting, according to police.

“We’re lucky that he was inside his vehicle enough to take that impact,” Freckleton told FOX13.

Before the crash, officials said that Nelson was warning the driver involved in the initial crash to stay in his car in case anyone else lost control on the highway.

Freckleton told FOX13 the woman driving the truck that hit Nelson’s car had seen the accident and moved over to give them space but did not anticipate hydroplaning on the highway.

Police say the driver claims her brakes failed before she crashed her car into a bus stop in Phoenix.

“We ask that drivers first reduce your speed and then move over if you have an open lane,” he said.

Officials released video of the crash on Sunday to Facebook, which showed the moment the truck the trooper's vehicle and the other vehicle involved in the initial crash before skidding down the rain-soaked interstate lanes.

"Another vivid reminder of the importance of SLOWING DOWN in inclement weather," police said.

Freckleton said in his five years with the highway patrol, he's been hit twice. The most recent was in August when responding to a traffic accident that he described as a "pretty scary experience."

He told FOX13 that authorities finding that incidents involving drivers hitting patrol vehicles with their lights on is happening more frequently.

“I don’t see that the message is getting clearly across,” he said Sunday. “I feel like it’s getting worse, and I also think another reason this is happening because drivers are driving distracted.”