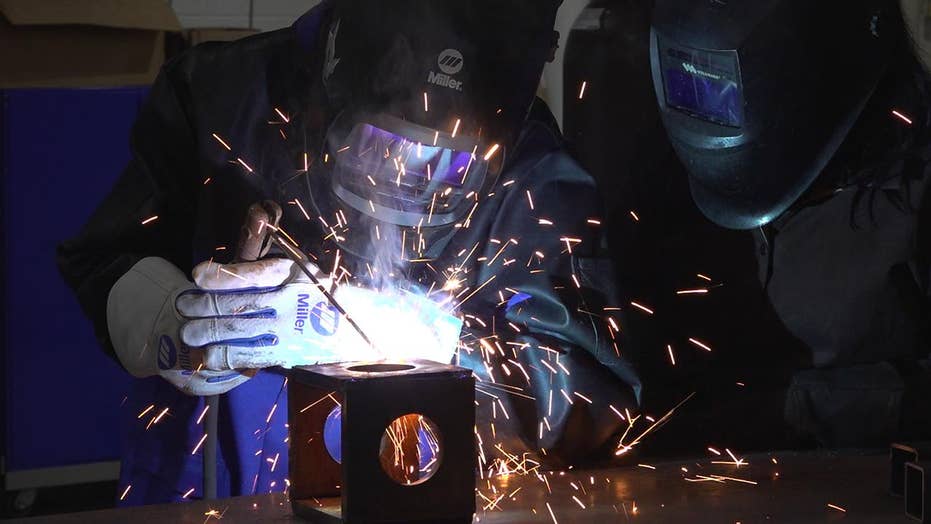 Demand grows for welding jobs in US

The demand for welding jobs in the U.S. continues to grow as less people seek out the career. Researchers say there will be a major shortage of welders in the next few years.

WILLIAMSPORT, Pa. – The demand for welders in the U.S. continues to grow as fewer young people seek out the career.

“I went home one day, and I was like, 'You know, I think I want to weld,'" says Natalie Rhoades, a student at the Pennsylvania College of Technology (PCT) in Williamsport.

Rhoades is on track to graduate in May with a bachelor’s degree in welding and fabrication engineering technology.

“I have a couple things in mind," says Rhoades. "I would definitely like to do welding inspecting."

Natalie Rhoades is on track to graduate from Pennsylvania College of Technology with a bachelor’s degree in welding and fabrication engineering technology this May.

New research suggests she’ll have plenty of opportunities once she enters the workforce.

The American Welding Society (AWS) estimates there will be a shortage of more than 375,000 welders by 2023.

“There’s a lot of welding spots out there that have to be filled,” said PCT student Alex Bibber.

Researchers at AWS point to several factors influencing the shortage of workers.

“The shortage is due to attrition. Whether it is retirements, people leaving the industry, or people moving and advancing. It’s also due to a negative perception of welding,” said Monica Pfarr, the executive director of the American Welding Society Foundation.

Rhoades, one of 18 women in a program of more than 300 students, agrees there is a stigma surrounding the profession.

“Just 'cause you’re a girl, you know, people think it’s a dangerous job. They think it’s dirty, you know, you’re not going to be able to do it. But it’s just another thing. It doesn’t bother me at all,” said Rhoades.

According to Pfarr, the shortage in welders also stems from students increasingly choosing universities over trade schools.

“There’s that [belief that] everybody needs a four-year degree if you’re going to be successful, and that’s just not the case,” said Pfarr, who also suggested that fewer high schools are exposing students to the possibility of enrolling in trade schools.

"Unless they have someone in their family as a role model, they have no idea that that’s even a possible career for them,” said Pfarr.

PCT is doing its part to make up the shortfall, having just completed a $7 million expansion of its welding lab, one of the largest in the country.

PCT's welding lab is one of the largest in the country.

The whole facility measures more than 55,000 square feet, nearly the size of a football field.

The welding lab expansion will allow the school to enroll around 60 more students per year in addition to more than 300 students who already participate in the program. College officials say it was necessary because of growing interest from students.

“We had a waitlist for four or five years of students that we could not accommodate because we did not have enough physical space to bring them in,” says Webb. " ... [We have] new robotics, an electron beam welder, a laser welder. A lot of technology that our students would not have been able to see before."

Students at PCT can choose to earn a welding certificate, an associate degree or a bachelor’s degree.

“One of the reasons for the expansion was to bring more students in because we know that we can create family-sustaining wages out of these careers and we want to make sure we give all those people that opportunity," says Webb.

Students can choose to earn a certificate in welding, an associate degree or a bachelor’s degree.

According to Webb, students with an associate degree typically start out making at least $40,000 per year.

“I think a lot of people just don’t understand welding jobs are not just getting out there and welding in a muddy hole or using heavy equipment," says Bibber. "You could work on factory lines, programming robots, you could go get a job with Chevy and work on the new Corvettes."

Rhoades plans to work as a welding inspector once she’s done earning her bachelor’s degree.

“I think it’s really rewarding ... just being a girl in a male-dominated field," she says. "People kind of look down on you and don’t think that you can do it, but we can do anything that guys can do."