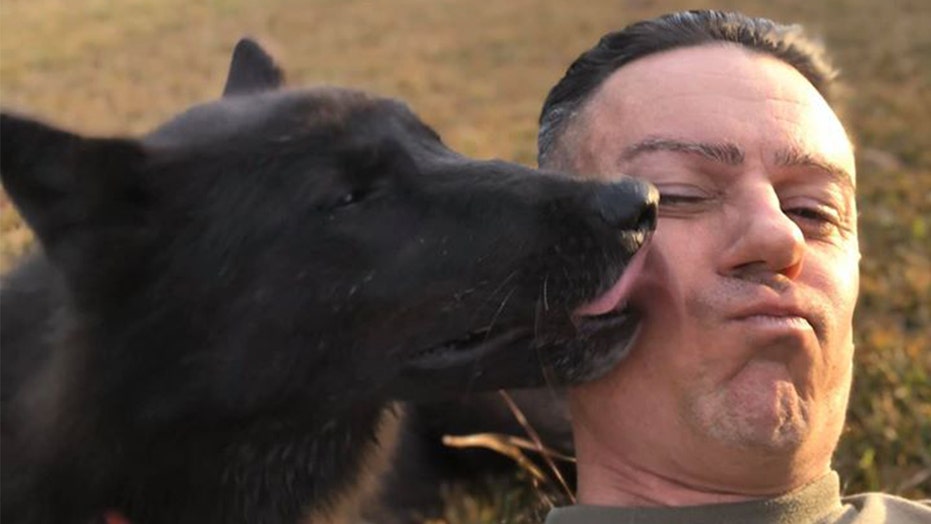 A U.S. veteran’s search for his beloved dog came to an end earlier this month after he found an anonymous note in his mailbox saying the pup had been shot dead after being caught on someone's property without a leash.

Chad Stricker, of Pearl River County, Miss., spent days searching for his 10-month-old wolfdog named Nymeria when he found the typed note, along with her collar, in his mailbox. He shared a picture of the note and collar on Facebook in a now-viral post.

“I’m sorry to inform you that your dog was shot and killed Saturday night while digging through my garbage,” the note said. “It did not suffer and I did not take pleasure in killing it. There is a county leash law which you should abide by so that I do not have to kill any more of your pets.”

The anonymous, typewritten note was left in his mailbox along with Nymeria's collar, Stricker said. (Chad Stricker / Facebook)

Stricker, whose social media page says he served in the Army, was heartbroken.

“I was sick to my stomach,” he told the Biloxi Sun Herald. “To think that someone killed her while we had been out looking for her, for digging in the garbage ... An animal is not worth more than your trash or the time to make a phone call?”

Nymeria’s large yellow collar had an attached tag that showed her photo and description of her personality, along with Stricker’s address and phone number, the paper reported. Stricker described Nymeria as “one of the sweetest dogs anywhere around and very loving” in his post.

However, he told the paper that there was nothing he or police could do because Nymeria had been off her leash while on another person’s property.

The leash law in Pearl River County requires all animals to be fenced in or restrained on a leash, or otherwise be considered a public nuisance, according to the outlet.

“Unfortunately we see that a lot,” Treadaway said. “This dog lost its life over an invisible line it can’t see. As soon as an animal goes onto someone else’s property, that leash law goes into effect. But just because it’s law, doesn’t make it right what this person did.”

Stricker described Nymeria as “one of the sweetest dogs anywhere around and very loving.” (Chad Stricker / Facebook)

Stricker wrote a lengthy note of his own to the anonymous “coward” who claimed to have shot the dog.

“It’s sad to think I have a neighbor of your moral character living so close to me that would do this,” it read in part. “Do I hate you, no, I pity the person you are and those who have to tolerate you.”

Stricker said Nymeria’s body wasn’t returned to him. He asked to be told where the body was or for it to be left on his driveway so he could give his beloved dog a proper burial.

“I pray one day you come to realize what you have done and teach those in your household to be better,” he wrote.