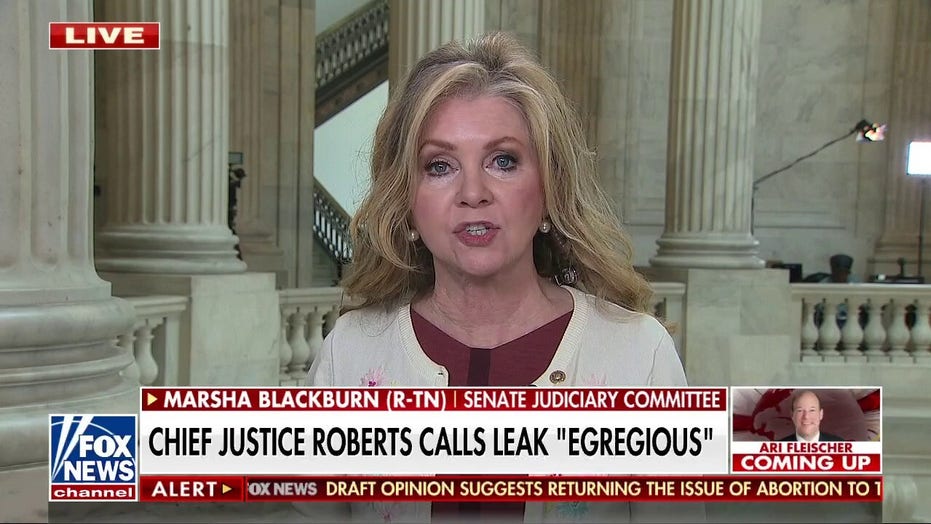 Sen. Marsha Blackburn, R-Tenn., accused the Democrats of using the leak to push their progressive agenda.

The U.S. Marshals and Supreme Court Police have not indicated they plan to increase security around the court or justices amid anticipated protests over the court's leaked draft majority decision that would strike down Roe v. Wade.

"I remain committed to protecting all life," Rep. Randy Feenstra, R-Iowa, said on Twitter Tuesday. "I am also concerned that private Supreme Court deliberations appear to have leaked. I pray for the Justices, their safety and their courage to do the right thing and overturn Roe v. Wade once and for all."

The two law enforcement agencies most responsible for protecting federal judges have remained silent since Politico reported on the leak of Supreme Court Justice Samuel Alito's draft majority opinion, which sets the stage for the court to overturn Roe v. Wade and Planned Parenthood v. Casey.

Feenstra was not the only person to express concern about the safety of those joining the Alito opinion, with the Republican Party of Arizona, Georgia Senate candidate Latham Saddler, and conservative commentator Todd Starnes joining a chorus of social media users concerned about the physical safety of the justices.

Despite repeated attempts to reach both the Supreme Court police and U.S. Marshals regarding security measures for justices amid rising tensions after a draft opinion leak overturning Roe v. Wade, they have yet to respond.

A police officer patrols in front of the U.S. Supreme Court in Washington. (Emily Elconin/Bloomberg via Getty Images)

Protests quickly broke out at the Supreme Court building after the publication of the report, with law enforcement ordering barricades be erected in an attempt to protect the building.

Crowds chanted "abortion is health care"  and "hey hey, ho, ho, sexist fascists have to go" in protest of the possible decision, drawing rebukes from counter-protesters there to celebrate the potential ruling.

The Washington, D.C., Police Department said Tuesday it would be providing Civil Disturbance Units in response to potential "First Amendment activity" after the report.

Capitol Police announced they would also provide officers to help secure the area, saying they would be "working closely" with partner agencies.

"We are working closely with our partner law enforcement agencies to prepare for any potential demonstrations in the area of the Supreme Court, including adding additional officers in the area," the agency said in a statement.