Murder in the Capital: What drives people to kill?

This is the second story in a series about murders in Washington, D.C. Read the rest here: Part 1

WASHINGTON, D.C. – Michael Lofton was murdered for breaking up a dice game. His death set off a cycle of retaliation, yet Lofton’s killer was never arrested, his older brother, Larry McMichael, told Fox News.

"God be told, I lost him when he was 18," McMichael said. "He broke the crap game up and they killed him."

The next year, McMichael’s close friend was murdered for inexplicable jealousy.

But those incidents aren’t unusual even though they happened over 20 years ago. Murders in the nation’s capital most frequently stem from a petty dispute or insult, according to criminologists and local officials.

Larry McMichael, a drug dealer-turned youth mentor, describes his pain after his brother was murdered.

"A lot of these just petty arguments – just not being able to process anger – is leading to a lot of the homicides that we've been seeing," D.C. Witness Editor-in-Chief Trina Antoine told Fox News.

She said most homicides in Washington were between "people who know each other" getting into a confrontation that they "didn't think they could get beyond without a gun."

While rivalries between gangs or crews may drive killings, the underlying disputes frequently stem from petty insults, criminologists and local officials told Fox News. These can often grow from disagreements over drugs or money or women, or sometimes even from a rapper in one crew disparaging another.

"These conflicts ... can occur for surprisingly small things," Thomas Abt, a senior fellow with the Council on Criminal Justice, told Fox News. "An insult on social media, a dispute over a girlfriend and so on."

Such murders can be the result of an ongoing dispute or a spontaneous incident, according to Lisa Barao, a criminal justice assistant professor at Westfield State University. 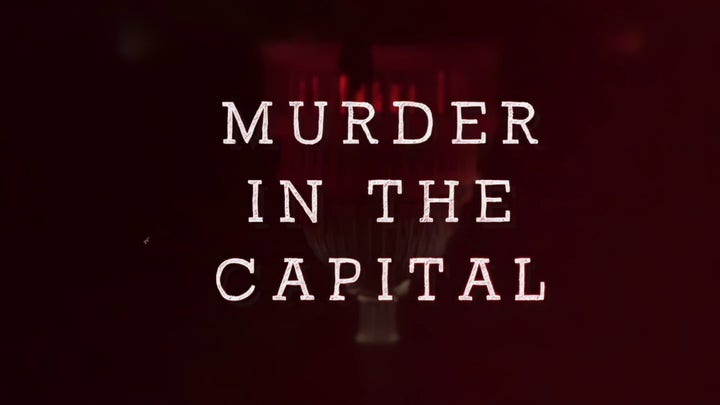 "Maybe you bump into someone at a bar, just an instant of disrespect," she told Fox News.

These types of incidents "have been around for a long time and have been driving most homicides in the United States," but they "really took off in 2020 and into" 2021, Abt said.

Meanwhile, murders over personal disputes "are sometimes even harder to solve because among the young men among whom this is happening, there's very low levels of trust in police," Abt told Fox News.

Police trust fell nationwide after an officer killed George Floyd in 2020. In the District, only half of all murders were closed that year, according to D.C. Witness. That fell to 42% the next year – the lowest clearance rate since the nonprofit began tracking the data.

Murders over petty insults put the broader public at risk for a variety of reasons. For one, bystanders are endangered, since most homicides are shooting victims, leaving open the threat of a stray bullet.

In addition to the 2021 murder surge in D.C., the city also saw shootings in areas that aren’t usually associated with gun violence.

A 6-year-old girl was killed during a July drive-by shooting. The next night, a shootout between two cars outside Nationals Park, which is frequented by political leaders, including Supreme Court Justices, caused a panicked crowd to flee the baseball stadium.

In June, a stray bullet killed a Peace Corps worker on 14th Street NW – a popular area littered with bars and restaurants, like Le Diplomate, where both President Biden and Vice President Harris have been spotted. That stretch experienced another shooting just weeks later.

Criminologists and local officials don’t know why gunfire has spread to neighborhoods that haven’t typically been associated with violence.

He pointed out that, unlike that shooting, there were no national headlines after 14 rounds were fired half a block away just days before.

"We can't ignore the fact that we've got neighborhoods that experience gun violence on a routine and regular basis," Allen said. "We've got to be just as concerned about the shooting and the violence that takes place that doesn't have the spotlight."

‘You've offended me, I'm going to the gun’

Killers – and victims – are frequently involved in gangs or criminal activity, but that doesn’t necessarily mean the murder is gang-related, criminologists told Fox News. A rivalry may exacerbate disputes, but the motivation often stems from a personal conflict.

"A substantial portion" of victims and suspects "are group- and gang- involved, even though a group or gang dispute isn't at the heart of that incident," Barao said. "Those people are still at very high risk for involvement in violence just via their connection to groups and gangs."

Nationwide, "it's typically about half or more are group- or gang-associated among the victims and suspects," she continued.

Washington gangs aren’t like criminal organizations seen in The Godfather or The Wire. Instead, they might be more appropriately deemed a crew, often consisting of just a handful of members, according to local officials and experts.

"D.C. doesn't really have a problem with like the big gangs like the Bloods or the Crips," Antoine told Fox News. "But they do have these local kind of neighborhood turf gangs that ... have confrontations with each other."

There has been an increase in such turf battles, however, which has helped fuel the murder surge in the city, according to Antoine.

"A lot of that is being stemmed from a lot of these turf neighborhood rivalries, along with just the gun culture we have," she said.

But even disputes between gangs can be rooted in petty arguments, local experts told Fox News.

"One crew will have a rapper that disparages another crew," which then feels it needs to stand up for itself, the deputy mayor for public safety and justice, Christopher Geldart, told Fox News.

"They're not going to stand up to it [and] rap back like we may have had several years ago," he added. "Now it's 'OK, you've offended me, I'm going to the gun.’"

A man racks a firearm.

DC RESIDENTS SPEAK OUT AFTER NIGHT OF BRAZEN SHOOTINGS: ‘DEFINITELY AN INCREASE IN VIOLENCE’

"They'll literally post up pictures of all of them holding guns and saying 'come get it,’" he said.

MPD doesn’t track whether "homicides are gang or drug-related as each case varies and circumstances change throughout the course of an investigation," a department spokesperson told Fox News in an email. D.C. Witness, which tracks Washington homicides, similarly had limited data on motivations behind murders, including whether they stemmed from petty disputes or gang violence.

But Geldart said there are about 91 crews – comprised of as little as 10 people – across the District with between 20 and 30 "truly active." It’s also not uncommon for several smaller crews to team up against a bigger one.

Ongoing conflicts between crews can stretch back generations, with some members saying disputes began with their grandparents, according to the deputy mayor. Crews will also fight over claimed territory, though that isn’t necessarily centered around drug dealing.

In fact, just below half of D.C’s violence is limited to about 151 of the city’s nearly 5,700 city blocks, according to Geldart.

"The evidence shows that homicide is quite concentrated among small networks of people in small clusters of locations," Abt told Fox News.

Experts and local officials provided a several reasons why a petty insult would lead to a murder.

"We're talking about people who have lost hope, people who are at-risk, deeply traumatized and have also run out of options," Allen told Fox News. "They think the only way to solve that dispute … is by pulling out a gun."

Abt similarly said: "Most homicides today are … between and among young men … without much opportunity or much hope, and there is a tit for tat cycle of retaliatory violence."

A revolver rests on a counter next to ammunition.

In fact, such a cycle followed Lofton’s murder after he broke up the dice game, McMichael told Fox News. The victim’s best friend was killed as a result, and McMichael himself said he wanted to retaliate, but was arrested on an unrelated charge.

A major reason disputes have devolved to murder is because killers were never taught the social skills needed to resolve conflicts without violence, according to criminologists.

The people at the heart of these disputes were never taught "morals, integrity and principles," Tyrone Parker, who founded a violence prevented organization called the Alliance of Concerned Men, told Fox News.

For McMichael, both his parents were incarcerated by the time he was 2 years old. His mother had Lofton between prison stints, leaving his older brother to raise him.

McMichael spent nearly his entire life working the streets and selling drugs. He said between 15 and 25 people he grew up with had been killed.

Now reformed, the 52-year-old mentors youth with the Alliance of Concerned Men and teaches conflict resolution skills. Such skills aren’t taught in communities with high rates of violence, which results in rash killings over petty disputes, according to local officials and criminologists.

Inexplicable hate or jealousy can also lead to a homicide, McMichael told Fox News, using his murdered friend as an example. He said he believes those are feelings everyone has as children and that kids in healthy environments are taught how to cope.

But he ultimately offered a more simplistic motivation behind murder.

If two people with that mindset encounter each other, "somebody is going to die. Somebody’s going to jail," he said. "So obviously both of you lose in the end."

Petty insults may be the motivation for murders in the District, but criminologists emphasized that there’s no clear explanation as to why killings have surged the past two years, and that any answer would be speculation.

"We don't know for sure," University of Nebraska Omaha associate professor Justin Nix told Fox News. "Anybody who gives you a definitive answer is not being totally sincere."

But he and other criminologists pointed toward several possibilities.

Fallout from the COVID-19 pandemic and Floyd’s death were recurring suggestions.

"The social interactions between people really have become transactional" over the course of the pandemic, Geldart, the deputy mayor, told Fox News. Conflicts that may have previously remained verbal are "being taken out much more in the realm of gunplay."

"For folks like you and I, it's unfathomable," he added.

The D.C. flag flies underneath the American flag.

Such transactional behavior, Geldart said, already existed – stemming from the lack of conflict resolution skills – but it was exacerbated and led to increased brazenness.

"The pandemic has exacerbated violence, trauma, the loss, the hurt," Allen, the city council member, told Fox News. "We're talking about communities that already had a lot of gun violence taking place, but now schools were shut down, households lost their homes, lost a roof over their head, jobs were lost, family members lost."

"The accumulated trauma of this pandemic is something we also can't ignore," he continued.

Nix further said: "We cannot rule out the pandemic and the strains that put on, not only individuals, but institutions, including the police, including hospitals, including violence interrupters and community programs that deal with violence."

Meanwhile, confidence in the police plummeted nationwide in 2020 after Floyd’s death. The relationship between law enforcement and police, which was typically already poor, likely sunk even further, according to criminologists.

Members of communities with low police trust – regardless of whether that’s due to law enforcement misconduct or otherwise – are less likely to turn to the police and more likely to carry firearms illegally, criminologists said.

"There is an expectation among those young men that you don't go to the police, that you resolve it amongst yourselves," Abt told Fox News.

"So, these young men often – if someone hurts them or someone they care about – they take the law into their own hands," he told Fox News. "Those types of homicides are particularly hard to solve."