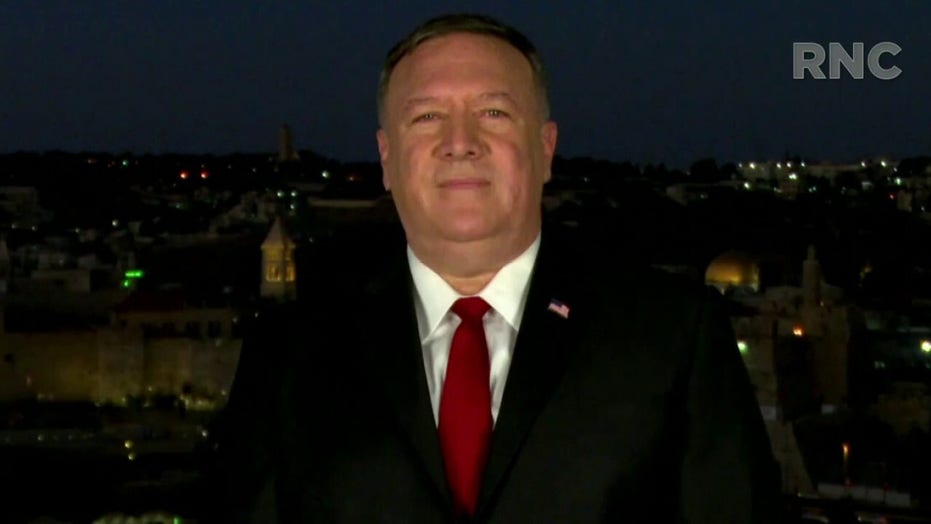 Mike Pompeo: Because of President Trump's leadership, ISIS has been wiped out

Secretary of State Mike Pompeo speaks at the second night of the 2020 Republican National Convention.

Two men fwere arrested on Monday for allegedly planning a 'Netflix worthy' terrorist attack on American soil looking to carry out violence on behalf of ISIS, according to KSAT.

The men involved, Kristopher Sean Matthews, of Eglin, S.C., and Jaylyn Christopher Molina, of San Antonio, Texas, are accused of conspiring to provide material support or resources to a designated foreign terrorist organization” according to the outlet.

KSAT reported that the documents from the U.S. District Court for the Western District of Texas in San Antonio said Matthews, who went by the alias “Ali Jibreel,” used an encrypted messaging application last year to find an ISIS facilitator outside the U.S. to help him travel to Syria and recruit additional members who support the group's ideology.

Meanwhile, Molina who refers to himself as “Abdur Rahim," used the same encrypted chat in April and May to post manuals on how to train with an AK-47 and images providing bomb-making instructions.

A spokesperson for the U.S. District Court for the Western District of Texas did not immediately return FOX News' request for comment.

In a series of social media posts, Molina reportedly wrote that America was his enemy and posted an extremely graphic photo collage of an American citizen being murdered by ISIS members.

TRUMP SAYS HE HAD 'A SHOT' TO TAKE OUT SYRIA'S ASSAD, BUT EX-DEFENSE CHIEF MATTIS OPPOSED IT

FBI investigators reportedly used covert tactics to track Matthews and Molina, in which they learned of conversations between Matthews, Molina and others in a secretive chat group where they allegedly professed their loyalty to ISIS, their hate for the United States and Western nations and their desire to support the extremist terrorist group however they can.

In one discussion between the men, Molina allegedly said “we need to stick together, we need to defeat them, we need to take a lot of casualties.”

Matthews allegedly suggested it would be better to attack government centers rather than places like “malls where innocent children are,” with potential targets including Trump Tower and the New York Stock Exchange, according to the newspaper. He also allegedly said the terrorist attacks would give the men “rock star status baby,” adding that use of bombs on various locations throughout the U.S. “could be Netflix worthy.”

In addition, the federal affidavit reportedly notes that the two men allegedly discussed the possibility of traveling overseas to join ISIS.

If convicted, the men could be sentenced to 20 years in prison, with a lifetime of supervised release.