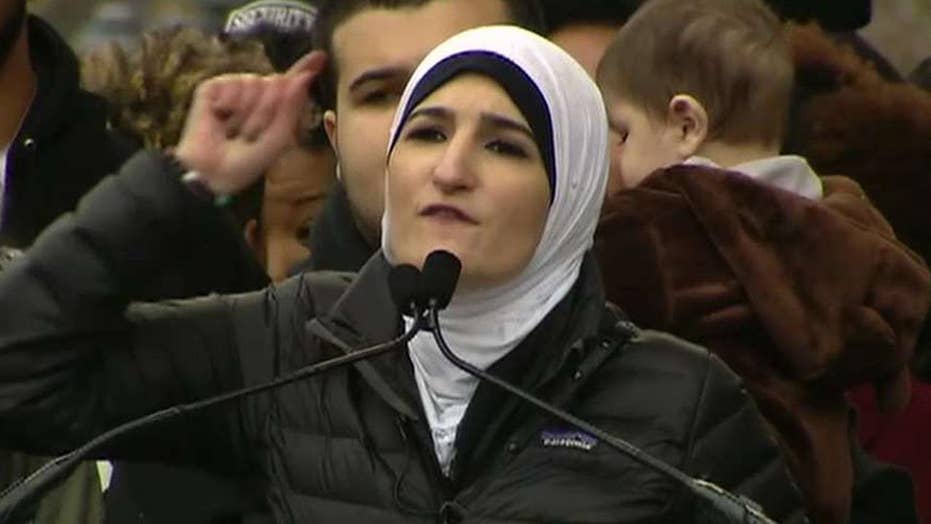 Controversial left-wing activist Linda Sarsour is under fire for claiming "Jesus was Palestinian."

The Brooklyn-born Muslim Women's March co-founder claims she is a victim of "hate" after a 24-hour Twitter debate this weekend on the roots of Jesus Christ of Nazareth.

“Jesus was Palestinian of Nazareth and is described in the Quran as being brown copper skinned with wooly hair,” the anti-Israel political activist tweeted on Saturday.

Sarsour has lauded Nation of Islam Minister Louis Farrakhan, objected to the Jewish right to return to Israel, and even called for "jihad" against President Trump. But this time she argued Jesus is both Jewish and Palestinian, saying Palestinian is a nationality and Judaism is a religion.

“Palestinian is a nationality not a religion. Your point is not negated. Jews lived with Palestinians in peaceful co-existence before there was a state of Israel,” she tweeted.

Sarsour switched from insisting Jesus is from Nazareth, which is currently in Israeli territory, to reminding her followers he was born in Bethlehem, which is part of the Palestinian Authority.

“Why so upset by the truth. Jesus was born in Bethlehem aka بيت لحم in Arabic. Bethlehem is in Palestine. It’s currently militarily occupied by Israel and home to a predominately beautiful Palestinian Christian community. Yes, the birthplace of Jesus is under military occupation.”

Her followers pointed out that Palestine as a concept didn't exist until over a century after Jesus was born in Bethlehem and grew up in Nazareth, both of which were on land called Judea.

But Sarsour countered that "multiple truths can co-exist." Eventually, she had enough "Jesus talk" and was saved by the Women's World Cup game Sunday morning.

"There is no reason to repackage Jesus as Palestinian. He can be a historical figure from Bethlehem or Nazareth without being 'Palestinian,'" Jerusalem Post's Seth Frantzman wrote Sunday.

"Sarsour’s attempt to reference the Quran is interesting because she seems to not mention other aspects of how Jesus is described in Islamic theology," Frantzman added. "For instance, he is seen as a messenger to the ‘Children of Israel’ and an adherent of the laws of Moses. He is linked to the line of Abraham, Isaac, Jacob and the Tribes of Israel, as well as kings David and Solomon.”