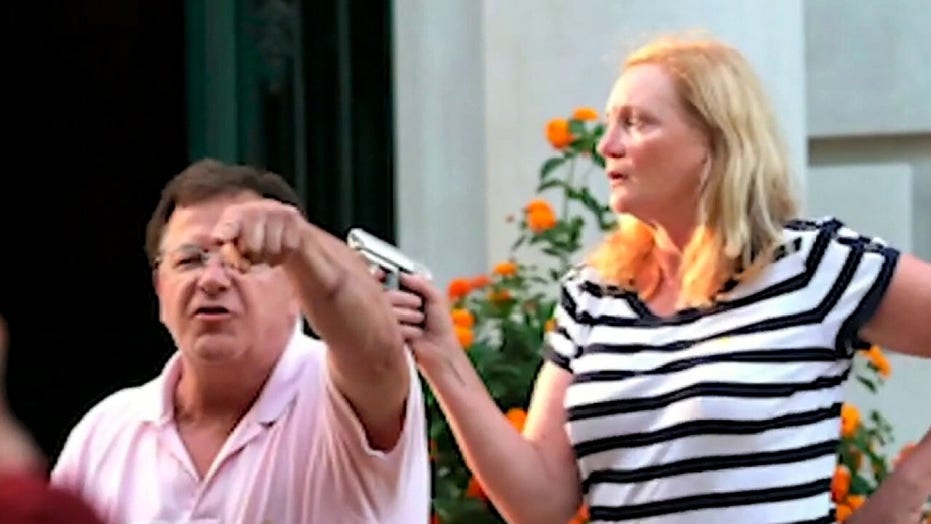 The governor of Missouri says President Trump has promised to "do everything he could within his powers" to shield a St. Louis couple who wielded guns at protesters in their gated community from prosecution, even as an attorney for the client says charges are imminent.

Gov. Mike Parson said he spoke to Trump Tuesday and was reassured that the president-- who previously has retweeted a photo of the couple, Mark and Patricia McCloskey holding up guns in front of their house in the June 28 incident--"understands the situation in Missouri."

A couple draws their firearms on protestors as they enter their neighborhood during a protest against St. Louis Mayor Lyda Krewson, in St. Louis, Missouri, U.S. June 28, 2020, in this picture obtained from social media. (Reuters)

"He understands the situation in St. Louis and how out of control it is for a prosecutor to let violent criminals off and not do their job and try to attack law-abiding citizens," Parson said at a press conference.

"The conversation I had with the President, said that he would do everything he could within his powers to help with this situation," Parson added.

Parson and Trump's conversation comes days after police served a search warrant at the McCloskey's home in the upscale Central West End neighborhood of St. Louis, in the same area where the city's Democratic mayor, Lyda Krewson, lives.

Nearly 500 protesters marching for racial equality and against police brutality were headed towards Krewson's residence during the June 28 incident, after she read off the names and addresses of individuals petitioning to defund the police. Mark and Patricia McCloskey came out of their house, brandished their guns, and demanded the protesters leave because they were trespassing. The couple later told Fox News' Sean Hannity that they were fearful that the protesters would "kill us" and "burn down the house."

Police seized the rifle that Mark was holding in the now-viral video of the incident, while a handgun that Patricia was holding was turned over to St. Louis Police Saturday by the couple's attorney Albert Watkins. The handgun had been in Watkins's possession as evidence that it was inoperable when she pointed it at protesters "in defense of themselves and their home at [the] time of the march," Watkins told Fox News. 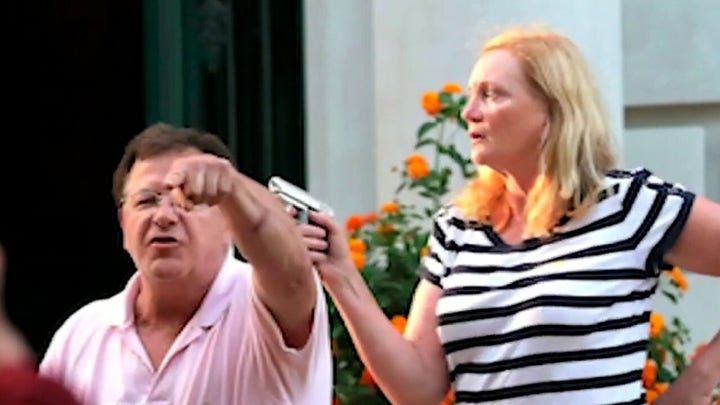 Watkins says he anticipates state charges against the couple "as early as today," he told Fox News on Wednesday, but views Trump's interest in the case as a positive.

"The President has been restrained to date and has been kept up to date in virtually real time," Watkins told Fox News. "His support behind the scenes was vital to permitting local police to step back from prior directives to be 'hands off' protesters.

"The support of the Executive Office appears to have motivated The Governor to garner a heightened degree of appreciation for implications and rights at risk in this situation," Watkins said.

Parson shared an article about the McCloskeys on Facebook Tuesday with the caption "Missourians have the right to protect their homes."

In a separate post, Parson lambasted city prosecutors, saying it's "appalling" that they are "targeting the McCloskey's for defending their home."

Meanwhile, St. Louis Circuit Attorney Kim Gardner's office released a statement calling it "unbelievable the Governor of the state of Missouri would seek advice from one of the most divisive leaders in our generation to overpower the discretion of a locally elected prosecutor."

"Today, both the Governor and Donald Trump came after me for doing my job and investigating a case," the statement said on Tuesday. "While they continue to play politics with the handling of this matter, spreading misinformation and distorting the truth, I refuse to do so. As I always do, I am reviewing all the available facts and the law and will apply them equally, regardless of the people involved."