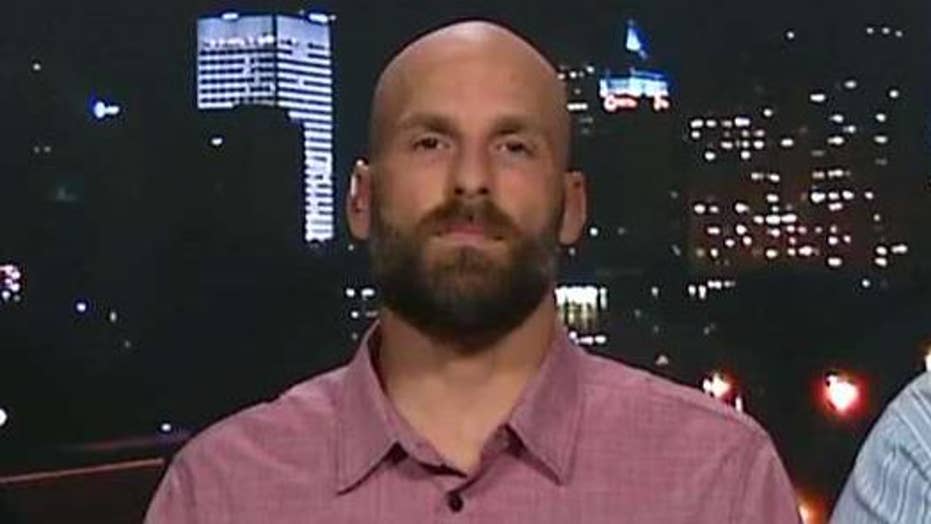 President Trump, who in recent days pardoned a former U.S. soldier convicted in 2009 of killing an Iraqi prisoner, is taking a broad look at veterans jailed for battlefield crimes and considering granting more of them similar relief.

Roughly 24 veterans are awaiting trial for combat zone actions, five are locked up at the federal penitentiary in Leavenworth, Kan., and many others have completed jail sentences, said David Gurfein, the chairman of United American Patriots, a nonprofit that advocates for veterans prosecuted for battlefield crimes.

Gurfein told Fox News that United American Patriots has provided details about those cases to Trump in response to a question he raised in a meeting with a congressman recently about how many veterans have been prosecuted and convicted for crimes in war zones.

“We are sending our warriors into some of the most dangerous environments we could possibly imagine,” Gurfein told Fox News. “They engage our nation’s enemies, yet we’re judging them by our domestic standards, as if it were happening here, on Main Street, U.S.A.”

On Monday, Trump pardoned Michael Behenna, who was convicted in 2009 of unpremeditated murder in a combat zone in the 2008 killing of Ali Mansur Mohamed, an unarmed Iraqi prisoner.

Behenna said he acted in self-defense when the man reached for Behenna’s handgun, but the Army said the argument didn’t hold up because Behenna was pointing his weapon at the prisoner.

Behenna admitted during his trial that instead of taking the prisoner home as he was ordered, he took the man to a railroad culvert, stripped him, then questioned him at gunpoint about a roadside bombing that had killed two members of Behenna’s platoon.

A military appeals court in 2012 found that jury instructions on self-defense were incorrect, and that prosecutors had failed to tell the defense of a crime scene expert who supported the claim of self-defense. Still, the court said the errors were harmless and did not affect the outcome of the trial.

“What I was told by President Trump ... was that I received a pardon because of the prosecutorial misconduct that happened during the trial,” Behenna said at a Wednesday press conference in Oklahoma, his home state.

The White House said in an announcement about the pardon: "Mr. Behenna’s case has attracted broad support from the military, Oklahoma elected officials, and the public. ... U.S. Army’s highest appellate court noted concern about how the trial court had handled Mr. Behenna’s claim of self-defense...Thirty-seven generals and admirals, along with a former inspector general of the Department of Defense, signed a brief in support of Mr. Behenna’s self-defense claim."

"In light of these facts, Mr. Behenna is entirely deserving of this grant of executive clemency."

Gurfein said that veterans who have completed jail sentences "still have the stigma of being a convict, the stigma of having committed murder -- even when they were wrongly accused and convicted -- hanging over their head."

Trump is said to be paying particular attention to a pardon request he has received on behalf of Army First Lt. Clint Lorance, who is serving a 20-year sentence in Leavenworth for ordering his men to shoot two suspected Taliban scouts in Afghanistan back in 2012.

Lorance’s attorney, John Maher, wrote a letter to Trump last year that said, “Of all the requests before you, this case stands out because the evidence shows that Clint is not guilty – he is innocent.”

Maher told Fox News on Thursday that he has learned that Trump has been inquiring about Lorance's pardon request and the circumstances of his case.

Efforts by Fox News to get a comment from the White House were unsuccessful Thursday.

Maher, a lieutenant colonel in the Army Reserve, said that the prosecution withheld crucial evidence – fingerprints and DNA – that would have proved that the men killed by his client’s platoon were not innocent civilians, but rather were involved with explosives that killed Americans.

"The Army made a serious mistake," said Maher, who filed a lawsuit in December on Lorance's behalf in federal court contending that his client did not receive a fair trial and asking the judge to disapprove the findings and the sentence.

“They’re in a volatile, uncertain, complex and ambiguous situation where a wrong decision could end up in dismemberment," Maher said. "These aren’t academic murders, these aren’t people who in the U.S. would become recidivists. If they don’t get it perfect [in the heat of battle], we’re going to cast a long shadow of prison over their lives?”

Some organizations have fought pardon efforts, arguing that the battlefield actions were overzealous and worthy of punishment.

"This pardon is a presidential endorsement of a murder that violated the military's own code of justice," Hina Shamsi, the ACLU's national security project director, said in a statement quoted in The Hill. "The military appeals court found Behenna disobeyed orders, became the aggressor against his prisoner and had no justification for killing a naked, unarmed Iraqi man in the desert, away from an actual battlefield. Trump, as commander in chief, and top military leaders should prevent war crimes, not endorse or excuse them."